‘Ex Machina’: Put to the test, humans, A.I. fall for each other and think about escape 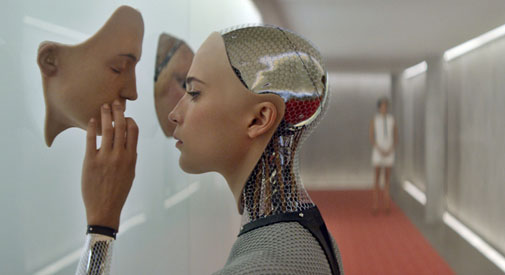 ‘Ex Machina’: Put to the test, humans, A.I. fall for each other and think about escape

The idea that machines could out-reason humans in games of manipulation, misdirection and emotional responses lies at the heart of “Ex Machina.” Movies such as “A.I. Artificial Intelligence” and “Chappie” have tackled similar turf, that of steel and silicon becoming aware, feeling consciousnesses, but sans the pervading danger underneath the Frankenstein motif that manifests in such futurescapes as “Terminator,” “2001: A Space Odyssey” and even “Blade Runner.” The reality of “Ex Machina” hangs somewhere in the middle, and in the equation of four parties isolated in the gorgeous mountain retreat of an eccentric billionaire, it’s a man who’s the most dangerous – not because of his quest for knowledge and evolution, but because of his hubris pushing boundaries in ways that would bring a satiating smile to Nietzsche’s face. 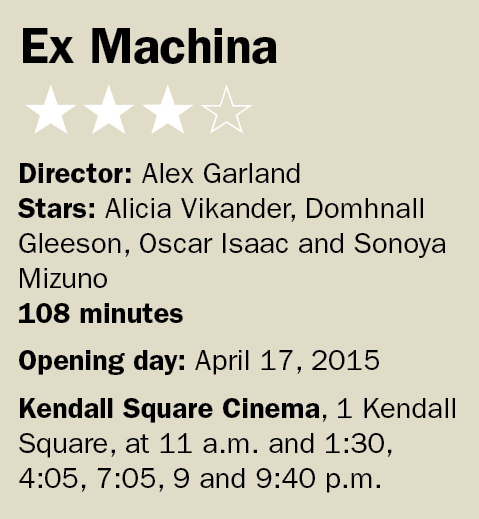 Nathan (Oscar Isaac), the mad scientist in question, made his nugget by inventing Blue Book, a stand-in for Google. He believes he’s created the perfect AI, so he invites Caleb (Domhnall Gleeson, son of Brendan) the company’s top coder, to his hillside retreat – it requires helicopter transport to get to – to see if his AI is as human as he believes it to be. The Turing test puts the AI through the loops to see if it can interact with a human seamlessly without revealing it’s a machine. Since Ava (Alicia Vikander) is a pretty face on a shapely acrylic body with a slight whirr and sleek cables and a soft blue neon glow pervading her translucent torso, any shell game is up immediately, but as Nathan tells Caleb over beers and pleas of “please call me dude,” it takes the test to another level. Just what that level is really, given the test’s foundation (a real one formed by the “Enigma” code cracker) never really materializes as Nathan continues to drink and descend into dark philosophical tirades and Caleb and Ava engage in interview sessions neatly separated by a thick wall of impenetrable glass, like a visitation at a prison.

As the sessions go on, Caleb and Ava start to fall for each other. He’s the more guarded of the two, and during the mysterious rolling brief energy blackouts when Nathan’s eye through his intricate CCTV network is blind, they begin to scheme their escape. At one point Nathan drops the tidbit that Ava has an actual vagina with orgasm sensors to boot. It’s a stop-and-think moment. Then there’s Nathan’s subservient aide Kyoko (Sonoya Mizuno) roaming the halls. She’s tall and lithe like a runway model with sad eyes, but put on a disco record and bang, a wide smile splashes across her face as she busts a move with infectious glee and perfect choreography.

The real star of “Ex Machina,” which means “out of the machine,” are the vast craggy green mountain vistas of Valldal, Norway, where the film was shot. They’re breathtaking and possess character beyond their verdant allure. Isaac, who made brooding an art form in “A Most Violent Year,” has less to work with and is asked to do more as a genius, dark inventor, capable capitalist, pugilist and drunk, all at once. Most people won’t get half that far in a lifetime, let alone a few days up on a hill. As the droid under scrutiny, Vikander gives a subtle yet affecting performance, both demure and knowing. Playing the ping-pong ball between creator and precocious daughter, Gleeson’s wide-eyed, inquisitive uncertainty goes only so far. It’s Mizuno with her dour servitude who nearly steals the film, but even she is upstaged by the gorgeous green peaks.

“Ex Machina,” ever muted and somber, is imbued with a looming sense of dread. It’s the same deep, dark complexion that propelled the foreboding 2010 future chiller, “Never Let Me Go,” where farm-raised clones cling to a glimmer of hope for a free life. The films share a screenwriter, Alex Garland, who here, after many years as a serviceable scribe, makes his directorial debut. It’s a competent and promising one, but as Garland takes on more, the pathos that made dark sci-fi territory such as “Sunshine” and “28 Days Later” so much more than macabre plot points gets run through the machine.