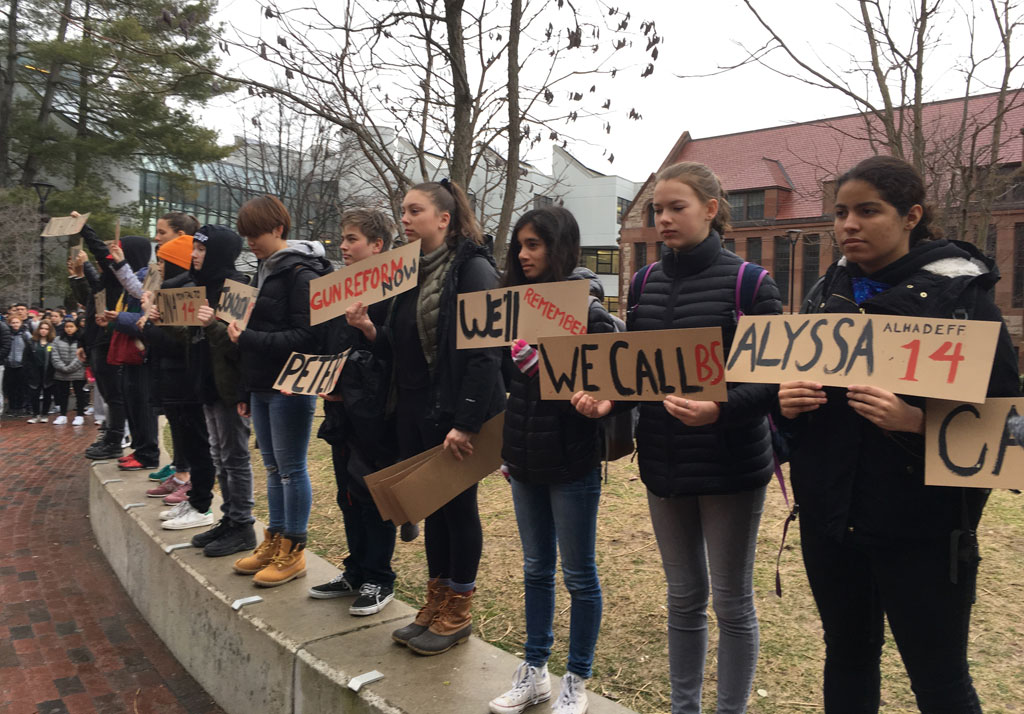 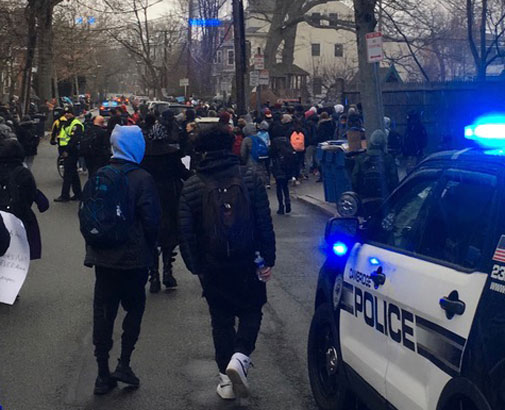 The sky was gray and weeping sleety snow as more than 500 Cambridge high school students held a silent walkout today for Students Against Gun Violence.

Not long after the morning bell at 8:05, students began streaming out of both Cambridge Rindge and Latin School buildings toward the main entrance green. The students were joined by some teachers and staff.

Several students jumped onto the concrete wall holding brown, hand-painted signs naming the students and teachers killed in the Marjory Stoneman Douglas High School shooting in Parkland, Florida, their first names big and bold, their age painted in red. Other signs included “Never Again #Resist,” “Silence = Complicity,” “We call BS” and “Adults like us when we have strong test scores but they hate us when we have strong opinions.”

“Thirty seconds to go,” someone called out. “After that, shut up!”

At 8:17 – in honor of the 17 people killed in Florida – the crowd became silent, and stayed that way for the next 17 minutes. Students and staff stood still and solemn. The only sound was the occasional whirring of a press photographer’s camera.

The walkout was the first CRLS action taken “in solidarity” with the national student-led movement March for Our Lives, which has a mission to “demand that … lives and safety become a priority and that we end gun violence and mass shootings in our schools today.” High school students and staff have also announced a plan to walk out March 24, when the Stoneman Douglas student organizers hope for a national day of action.

A 17-minute silent protest at the high school honored the 17 victims of a recent school shooting in Parkland, Florida. (Photo: Jean Cummings)

Today’s action was also organized to support the students at Somerville High School, who last week began walkouts and marches they intend to do every Wednesday.

After this morning’s CRLS walkout, about 200 students started to walk to Somerville’s Union Square to join Somerville students. High school administrators said they were impressed at the size of the walkout and march crowd, saying they had expected maybe 30 students to march. (Admittedly, not all of the students took the “to the march” route. School student social media later in the day had posts, “if you were one of those students who just cut school, shame on you.”)

Nevertheless, the majority of these students walked a route accompanied by police officers on foot and in patrol cars, blue lights flashing. In Union Square, Cambridge students joined with Somerville students near tent-covered tables, a microphone and speaker’s box to collect materials and start calling members of the Massachusetts Legislature’s Joint Committee on Public Safety to urge action on a bill filed by Cambridge state Rep. Marjorie Decker allowing anyone to prevent firearm ownership by people they feel are a danger to themselves or others. Decker has reported getting “a barrage” of social media harassment and death threats after testifying about the bill in November.

Somerville student leaders had prepared sheets with the 19 House and Senate committee members, their phone numbers, email and Twitter accounts, along with a suggested script and important facts about Extreme Risk Protection Orders.

Two of the Somerville’s eight student organizers, Laura Luiza and Anika Nayak, said their group came together because they were willing to “put in tons of time outside school to make sure the whole school was aware of what we are doing” by using Snapchat, Instagram and Facebook, calling people and going “the old-school way with fliers and posters and announcements.” After last week’s walkout of about 400 people, Somerville leaders reached out to Cambridge, Arlington and Medford schools, and students from each school huddled in groups around phones. “It’s about all of us coming together to make sure the representatives hear it’s not just one school, its all of us that want change.”

Arlington students said a March 14 protest will mark the beginning of a 10-week legislative program at that town’s high school, led by the Young Democrats club, targeting legislators whom they feel have remained inactive for too long.

Luiza and Nayak, of Somerville, were excited that they were also going to be joined virtually in the walkout by Granite City Arts Academy in Salem, New Hampshire, who – though they wouldn’t be marching – would stand in silent protest for 17 minutes. As the morning wore on, though, there was an announcement from the speaker box that the Granite City Arts students had been “blocked” from leaving the school; the phone numbers of the New Hampshire ACLU and the main desk of the school were announced. Students started dialing.

One CRLS teacher who had marched to Union Square as a supporter, not a chaperone, said, “It’s important that everyone understands this is a movement. It’s a movement.”

CRLS school and district administrators sent out letters this week saying that they “will neither promote nor punish these actions.” Students who walk out and march will be “marked unexcused absent,” but will not have their academic record affected. Luiza and Nayak said Somerville administration has said something similar.