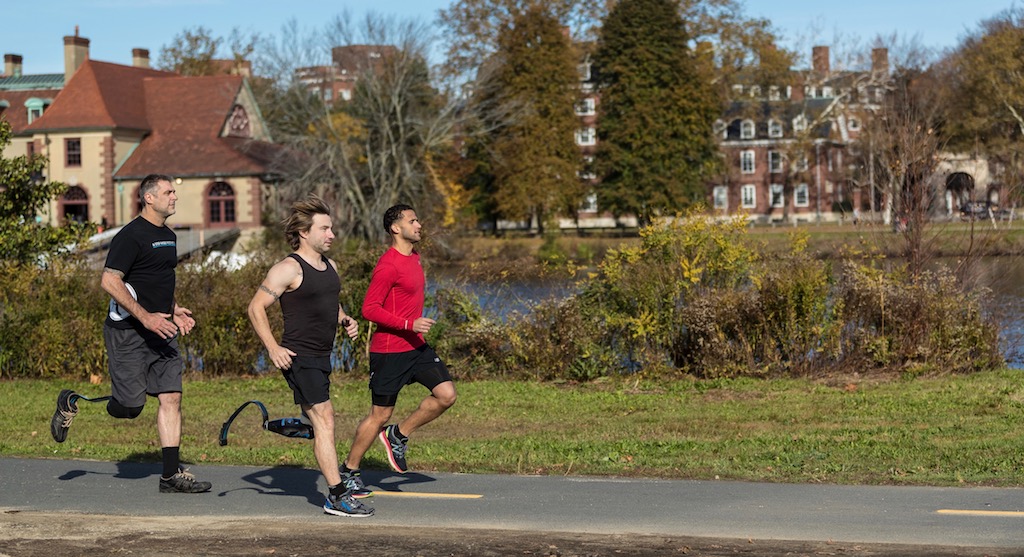 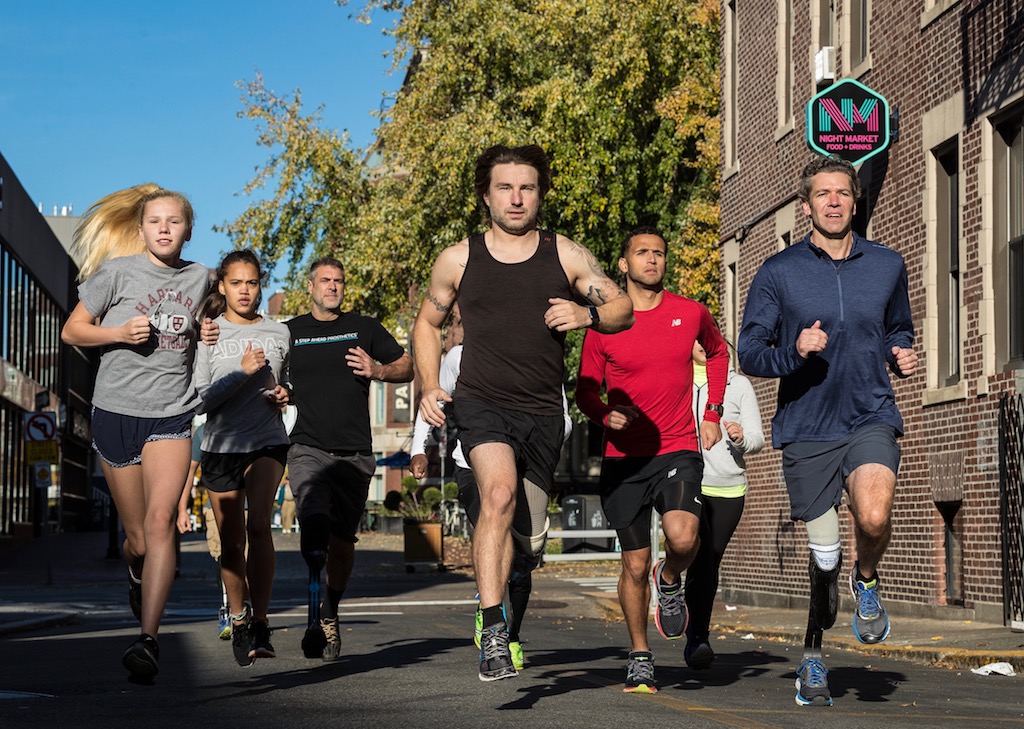 Runners prepare for the Bionic5K in Harvard Square, coming April 29. Co-organizer Will Borden is at right. (Photo: Joe Berkeley)

Competitive runners felt a little less welcome in Cambridge after a cap was set and some race-unfriendly rhetoric heard last year from councillor E. Denise Simmons and others.

But the city is at least open to a diverse set of runners. Simmons herself offered a resolution Monday welcoming the National Black Marathoners Association as members arrive for the Boston Marathon being run April 16 – though that is, of course, on the other side of the river – and registration is underway for the Bionic5K, an inclusive race planned for April 29 in Harvard Square and West Cambridge.

“The 5k is the No. 1 race distance in the United States – in 2016, 17,000 5k races were held in the U.S.,” said organizer Will Borden, a day school history teacher. “Typical races include one or two disabled athletes in a large crowd of participants. We believe we can do something different.”

All are welcome to participate, from able-bodied runners to walkers and children, but the Bionic5K’s focus is on runners with prosthetics or even such things as an artificial hip or medically upgraded knee. Two of the three race founders – Borden and Hugh Herr – are amputees (and Herr, of the Massachusetts Institute of Technology, is among the world’s top biomechatronics scientists) and proceeds from donations and the $40 race fee are earmarked to benefit the nonprofit Bionic Project, which advances prosthetic technologies and accessibility of resources to people overcoming physical challenges. The final race founder is restaurateur Matthew Curtis.

“By assembling a critical mass of amputee and disabled runners, we can break down barriers and normalize the experience of running alongside people with significant adaptations,” Borden said. “We hope that this truly inclusive race will not only bring different types of runners together, but also bring new people into the running community – encouraging those who might ordinarily shy away from a 5k because of disability to join.”

The Bionic5K begins at 9:30 a.m. at 41 Church St., Harvard Square, and stretches 5,000 meters along Brattle Street with a loop around Lakeview Avenue, Huron Street and Lexington Avenue to send runners back. Registration continues until that morning, but registrants get a private number pickup party from 5 to 8 p.m. April 27 at Curtis’ Cambridge 1 restaurant; there will also be a post-race Bionic5K Race Party for T-shirt pickup and awards. Information is here.