Enjoy the run, Cambridge marathoners, because there may well be fewer coming 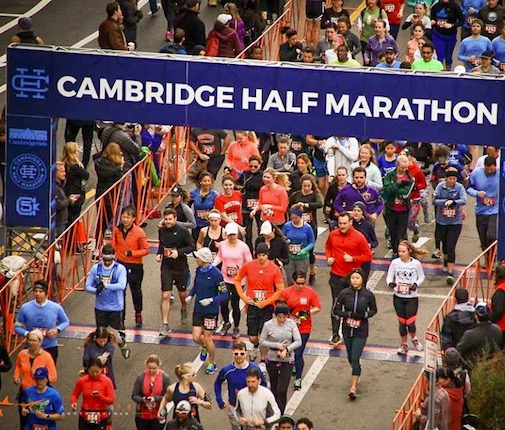 Enjoy the run, Cambridge marathoners, because there may well be fewer coming

Road races such as today’s Cambridge Half Marathon could become rarer, with City Manager Louis A. DePasquale saying the number of races is capped at 17 a year “and if we lose one of the 17, there will be a question of whether we let someone substitute in.”

The inconvenience of having roads closed for races – especially on Sundays, when people are trying to get to church – has bothered Mayor E. Denise Simmons for months, and in August she asked city staff to explain how permission for races is granted and how the costs and benefits balance out.

The details were simple: The city’s Special Events Committee approves runs, which must give at least two weeks’ notice to affected businesses and churches. Organizers had to donate at least $1,000 from race proceeds to a charitable organization.

Bang for the buck

That requirement became more stringent last month. Now the contribution is $5,000 or 60 percent of net revenues, whichever is higher, and all police details and staff overtime needed for the event must be paid by event organizers. A financial statement must go to the Special Events Committee within 30 days after the event.

Race organizers are also being “strongly encouraged” to look at holding events on days other than Sundays.

The city’s research into races and marathons found that Cambridge was “now pretty much one of the only cities around doing this,” and more applications were coming, DePasquale said. While acknowledging the runs were appreciated by some residents and can boost local businesses, the city found runners were sometimes paying high race entry fees with proportionately little going to Cambridge for the inconvenience. “Under the old guidelines we were not getting our best bang for the buck,” DePasquale said.

“We felt $1,000 was extremely low when we looked at what other communities were asking. We felt $5,000 was not a hardship. There was even discussion of whether $5,000 was too low,” Barr said. “I don’t feel like we feel like we’re in any danger, and haven’t heard from organizers of any races that we’re in danger or will put them out of business.”

Races held solely for kids, such as annual events run by CambridgeSide and the Massachusetts Institute of Technology, are exempt from the new rules.

“We could have far fewer”

The insight that only four or five of the 17 races held annually were strictly Cambridge affairs – such as Paddy’s Cambridge Classic 5K in September and April events benefiting the Andrea Harvey Memorial Fund – did not go over well with Simmons.

“For my money, we could have far fewer road races for what we get back. You’re saying greater than 10 aren’t even sponsored out of our city? Why are we inconveniencing the people who live here … for $5,000 to go to a local charity which goes unnamed vs. the major interruption, the backup on the street, the use of our infrastructure and police, fire and safety?” Simmons said. “We could have five, all Cambridge-based, and I would be happy. That would be sufficient.”

The price we pay

To the interfaith community, which hold services at various times, Sundays are a terrible day for a run. Councillor Dennis Carlone suggested that many runs could be diverted to Mondays on three-day weekends, with some even doubling up one after the other.

Today’s Cambridge Half Marathon course lasts three hours, starting at the CambridgeSide mall and heading west through MIT and Harvard to the North Beacon Street Bridge in Watertown before heading back along the banks of the Charles River to the finish line at Canal Park. It brings rolling streets closings on a dozen streets, including Massachusetts Avenue. But most are for a half-hour; a couple are for 40 minutes.

To councillor Nadeem Mazen, some road closings each year are “one of the costs” Cambridge pays for being a world-class destination.