Constellation Center land in Kendall Square will be sold, with arts plans to be relocated 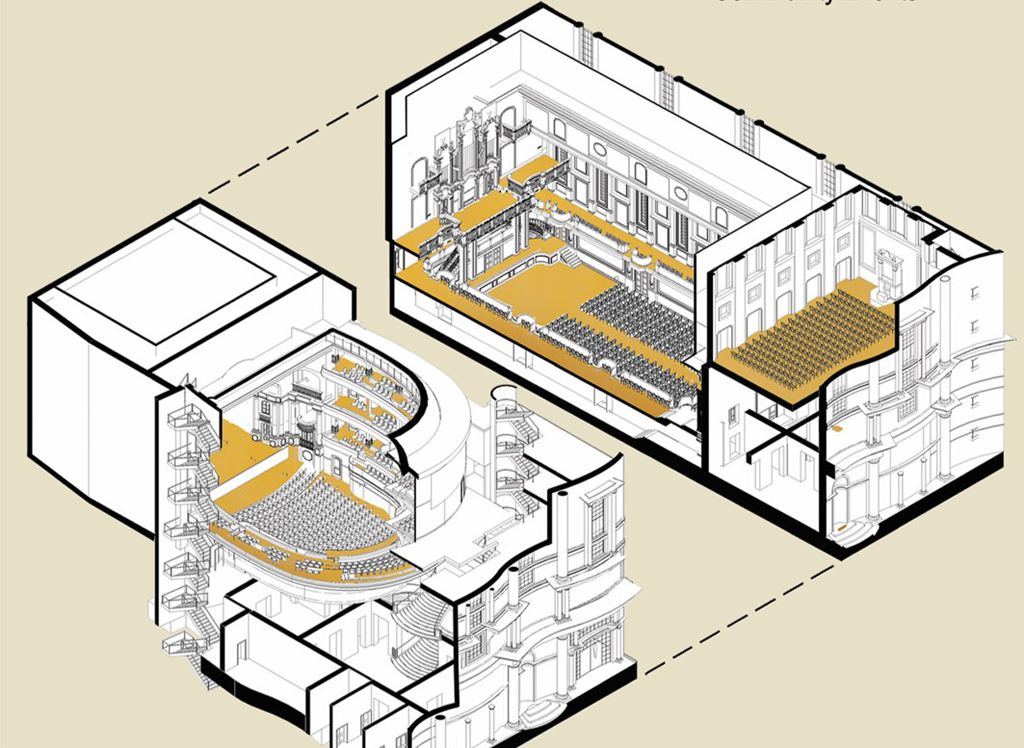 Constellation Center land in Kendall Square will be sold, with arts plans to be relocated

Plans for the Constellation Center in Kendall Square had been drawn up by venue designer, planner and acoustician Alban Bassuet.

There will not be a Kendall Square five-hall Constellation Center for the performing arts, and the land where it was to go will be sold, said Glenn KnicKrehm, president of the Constellation Charitable Foundation, but the plans are a “movable feast, for application and realization on one or more sites elsewhere.”

The sale is first priority, but “Constellation’s real estate advisers are optimistic that suitable sites are available,” KnicKrehm said. It may be outside Cambridge, as he said his board expected “to be looking at a range of sites in Greater Boston.”

The cutting-edge arts utopia for Kendall Square was conceived in 1996 and at one time was expected to open in 2012, but fundraising lagged over the years as KnicKrehm’s painstaking acoustical research extended and costs grew – from $85 million in 2007 to $100 million a few years ago to estimates of $300 million given to The Boston Globe in 2015.

Meanwhile, the plot of land called Parcel C languished, a gravel pit surrounded by chain-link fence, and in October the city said talks had started about instead building a mixed-use complex with ground-floor arts space topped by a tower of housing or business space. The center’s 35,865-square-foot lot was set aside in 1999 as part of the 1.3 million-square-foot Cambridge Research Park, which began its exemption from taxes; after two decades of exemption as a proposed nonprofit arts center, though, the status changed with the project, and the site returned to the tax rolls Jan. 1, according to Robert P. Reardon, director of the city’s assessing department.

“The board thoroughly explored the [mixed-use] possibility,” KnicKrehm said Thursday. “But too many compromises in quality were required to accommodate the addition to the site of offices, laboratories and residential spaces. Therefore, the board has decided that the best option is to sell Parcel C, even as it carries forward its philanthropic mission in the performing arts.”

The main driver of the decision was the surging real estate market. “The skyrocketing commercial value of the land outran the philanthropic value of committing the site to even a world-class performing arts center,” said KnicKrehm in a press release that directed calls to Andrew W. Hoar, president and co-managing partner of the real estate firm CBRE New England.

Hoar will serve as real estate adviser and exclusive agent for the land sale, KnicKrehm said.

At this early stage, Hoar couldn’t say how much a sale of the site would bring in, but “the Cambridge market is arguably the top-performing market in the country, and we expect pricing to reflect the dynamic activity taking place there,” he said.

The land – near the square’s T stop and across from a 14-acre parcel that will be developed, transforming from its sole use for the Volpe federal transportation research center to add retail, residential and open space – could become almost anything, he said.

“This site really appeals to a broad range of uses, from life science to multifamily to tech/office. In addition, there will be large corporate users that will consider the site for a headquarters location,” Hoar said.

C.A. Webb, newly appointed president of the Kendall Square Association, said the sale would ultimately be a good thing for the area. “It will be great not to have an empty block in an otherwise bustling district,” Webb said. “My office looked at that parcel as an eyesore and an unrealized opportunity for the neighborhood, as I think a lot of us had stopped believing that the project would come to pass. I’m so excited to see it developed.”

Residents hearing of the sale after decades of inactivity on the promised performance hall were not pleased. “Little more than a scam,” one said via social media, while vice mayor Jan Devereux called KnicKrehm’s actions “land-banking” that would allow him to see a huge profit after years of tax exemption as market prices swelled.

KnicKrehm’s vision was for a world-class performing arts center, a five-hall facility for the performance of music, opera, theater, dance and cinema that was also designed to be used for community, educational and family events and included meeting, conference and function space in support of presenters, arts organizations and the Kendall Square Innovation District.

“The work of the Constellation Charitable Foundation will continue as it explores the possibility of replicating its completed designs at another location, and identifying appropriate land opportunities,” KnicKrehm said.

“The Constellation Charitable Foundation and Constellation Center board and staff are deeply grateful to our innumerable colleagues and organizations around the world, including many Cambridge- and Boston-area community groups who have supported and assisted our work thus far,” he said. “We especially appreciate and thank our many generous individual donors, and we are immensely grateful to the City of Cambridge for its enduring support over many years. We assure everyone that the inestimable value of your contributions will continue to find rich fruit in our future endeavors.”