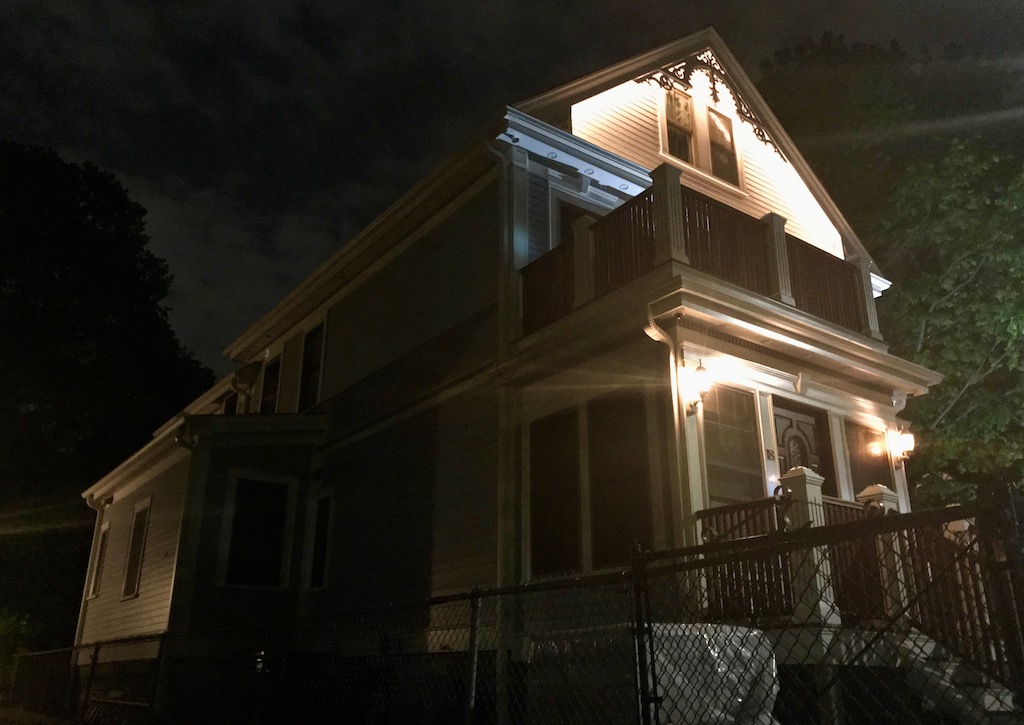 A home on Beech Street, North Cambridge, is being built with elaborate outdoor lighting under its eaves, some of it shut off early Tuesday. (Photo: Marc Levy)

With “egregious” examples of light pollution spreading across the city, officials reminded city staff Monday that it needs to do something with the problematic light ordinance proposed last year – and rejected – after a lengthy public process.

The city’s failure to enforce light violations has been a complaint among residents since at least 2007, and prominent and problematic new examples have popped up since – such as atop the Zinc luxury apartment building at 22 Water St. in the Cambridge Crossing neighborhood, or the 100 Binney St. office building in Kendall Square.

Zinc’s offending lights (currently banned from use) are on its roof; the illumination at 100 Binney is from hallway and office fixtures within. And officials and residents were quick to point out Monday that the light ordinance now being considered addresses neither.

“I can sum up how good this ordinance is in one sentence: It would allow Zinc,” East Cambridge resident Heather Hoffman said.

The task force was criticized for being weighted toward representing business interests, and residents and officials said last year that with the city’s Economic Development arm in charge of the effort, results were toothless.

The weaknesses of the ordinance are why, after years of work, city councillors rejected it in September and asked for staff to try again. The co-sponsors of Monday’s order said it was necessary to bring up the issue and even add a June 11 deadline for response from the City Manager’s Office because there’s been no response after nearly early eight months.

“We just haven’t heard anything about it,” vice mayor Jan Devereux said. “We asked a number of questions and never got a response, in written form or oral form,” councillor Dennis Carlone added.

Meanwhile, new development, municipal buildings and even existing commercial structures have added lighting that might be addressed by an enforceable law, with some citing towers in Radcliffe Yard and a Beech Street home with elaborate lighting under its eaves as examples that might be covered by either the law or a proposed Light Cambridge Working Group, which would review display lighting on historical and other prominent structures. The proposed law “has serious flaws,” said Kenneth Taylor, a local architect and historic preservation advocate who attended the lighting task force meetings. “At the same time, I think it’s critically important that an ordinance be finalized, illustrated by the fact there are new lighting installations every day.”

Worrisome also are buildings – skyscrapers, by Cambridge standards – on the cusp of design that might be grandfathered in without an ordinance in place setting limits on their illumination, councillors said.

“We’ve seen egregious light pollution,” Devereux said. “This is happening all over the city, and we need some ordinance to get some reasonable controls.”