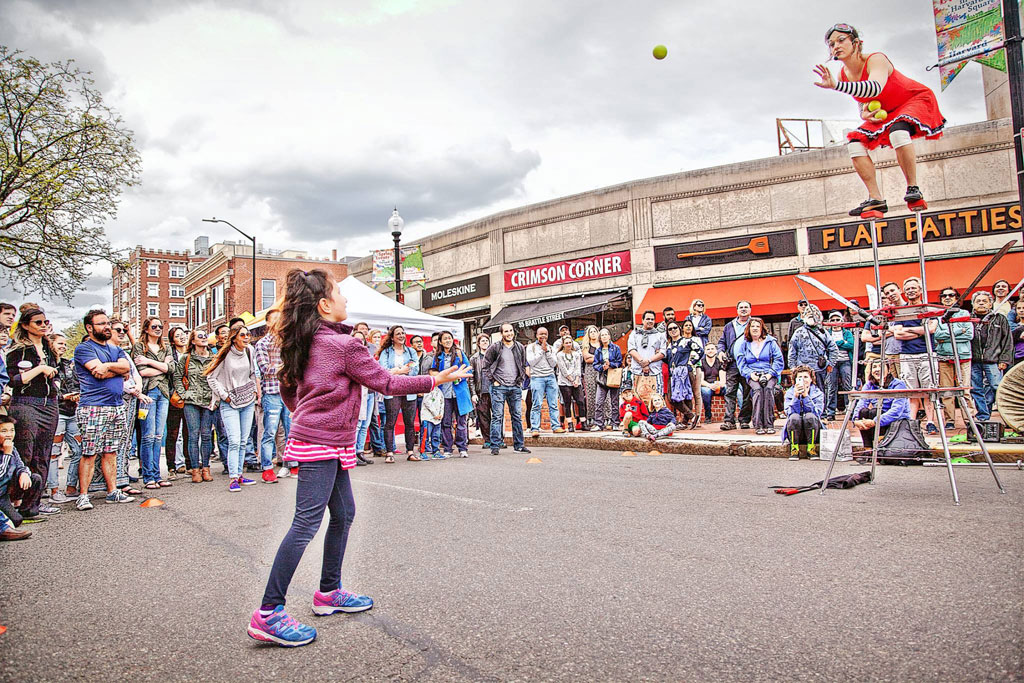 The city’s arts agency showed up to defend its $40 fee for street performers Thursday, but city councillors were united in seeing the fee removed and the streets newly enlivened with musicians, puppeteers, magicians and circus artists.

The switch to a free permit – and loosened rules about where performances can take place – could reach the full council for a vote in July, at the sole regular meeting to be held in July and August, but will more realistically appear on an agenda starting in September. Out of fairness to the roughly 250 buskers who have paid the annual fee this year, the fee wouldn’t be eliminated until Jan. 1, officials said.

The current program, with its $40 fee and $15 replacement fee funding three street performer monitors, was put in place to “enliven our squares and open spaces,” said Cambridge Arts’ executive director Jason Weeks, arguing that the system “protected and enshrined” performers in Cambridge.

That didn’t sound quite right to the council, who saw a Central Square Cultural District being drained of creativity and whose Dennis Carlone and Mayor Marc McGovern noted that Harvard Square had become much less of a destination for family and visiting friends as performers have gone elsewhere.

“When I moved here 45 years ago, Harvard Square in particular was active. It was, in the positive sense, almost a carnival of delight. We used to bring people down there who were visiting Cambridge and they couldn’t believe how much fun it was, given all the artists and other performers,” councillor Dennis Carlone reminisced at the day’s Ordinance Committee hearing.

Cambridge street performers in years past included rock star Amanda Palmer, who busked for six years in the late 1990s and early 2000s as a living statue called “The Eight-Foot Bride.”

Tracy Chapman, of “Fast Car” fame, busked in Harvard Square in the mid-1980s while attending Tufts University, as well as playing Club Passim and other nightclubs. 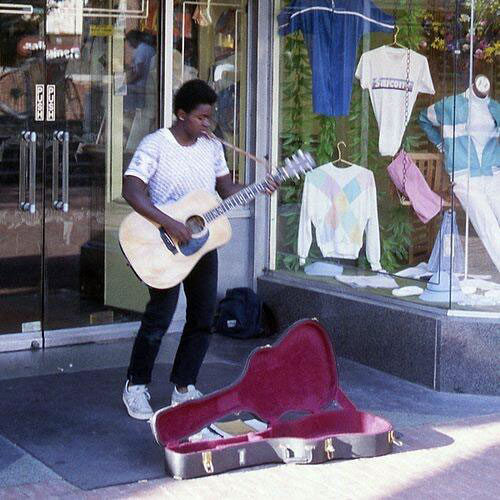 A photo shared online by Tracy Chapman fans who say it shows the singer-songwriter during her busking years.

Plenty about the fees sounded off as details were explained by Julie Barry, director of community arts. McGovern didn’t understand why a group was charged up to $160 – the fee applied to as many as four members of a group of any size. Councillor Sumbul Siddiqui was concerned by the $15 replacement fee. Councillor Jan Devereux saw a disincentive in the calendar year approach taken with the permits, which meant a performer who came to Cambridge Arts for a permit as the year was winding down would be charged as much as the performer who signed up Jan. 1. (“We tend to work it on the city’s fiscal year,” Weeks explained.)

Similar questions about the value and effect of the $40 fee had been heard in May as a Central Square arts overlay district was discussed, with the eviction of 200 artists and musicians from the EMF Building near Central Square as a backdrop. But the questions go back at least to September 2015, when then-councillor Nadeem Mazen held a hearing asking for the fees to be eliminated; Cambridge Arts and the City Manager’s Office insisted on keeping the fee even though it meant losing buskers to Somerville and Boston, where they could perform for free.

The Cambridge Arts officials and David Kale, assistant city manager for finance, arrived with a few reasons Thursday why their rules – arrived at with the help of some buskers and community arts advocate Stephen Baird, they noted – still made sense.

“People tend to take something more seriously if there’s a price attached. If there’s no fee associated with it, there might be a tendency to disregard the law,” Barry said. “It was advised to us that some small fee still be maintained in order to instill the gravity of the ordinance, so there’s still some weight behind the regulations.”

From Kale’s perspective, the fee to street performers should be kept so others don’t feel fees are parceled out unfairly. “The city charges lots of fees for lots of things,” Kale said. “We don’t want to go down a road where people might be saying, ‘Why can’t I have that fee waived? Why do I have to pay for a birth certificate?’ We have to be cognizant of … what implications that may have down the road.”

Councillors were unswayed. Devereux noted with some amusement that the city doesn’t charge for a permit to operate a leaf blower, and “one could argue that we’d much rather hear people playing music than operating a leaf blower.”

But it was McGovern and councillor Alanna Mallon who first made it clear that there was little will among the council to continue a fee program that sapped the city’s streets of life in exchange for less than $10,000 in revenue annually, given that some permits were discounted for students and free to homeless performers meeting certain standards.

“If we’ve had the same fee for several years and we’re not seeing the busking activity, this would be the perfect time to talk about not having a fee,” said Mallon, who has made the arts a focus of her first year on the council. “I would argue that just registering for a permit would give the same feeling of having skin in the game … I see the fee as being something we can work on now to really enliven our squares and bring back some of the joy that councillor Carlone was talking about.”

Councillor Quinton Zondervan agreed that he “didn’t see a real value in it,” and said fees needed to be removed as a test of whether they impeded creativity on city streets. “We can always go back,” he said.

At one point, Barry said Cambridge Arts was proposing to cut the fees in half, then apologized upon realizing that proposal wasn’t in the language being presented. But there was language relaxing rules about where buskers could perform, and councillor Craig Kelley, who runs the Ordinance Committee, had several questions and proposals that could change it further – for instance, allowing quieter, nonmusical performances within 100 feet of a school or house of worship.

In general, the rules would allow for more “circle acts” such as acrobatics (which draw crowds into a large circle) that generally need more space than “walk-by acts” such as lone singers with guitars. Cate Flaherty, a juggler and acrobat who performs as Cate Great, said she liked the proposed changes for this reason, because the only viable spot for circle acts in Cambridge now is Brattle Square, the spot in front of Crema Cafe in Harvard Square – and it’s a popular spot where she runs the risk of arriving too late and finding a musician has set up for a six-hour set.

She hoped the change in fees wouldn’t result in the “survival of the fittest” chaos seen in some other cities.

“There’s a lot of intimidation that goes on in an entirely unregulated system,” Flaherty said. “You just end up with performers fighting among themselves.”