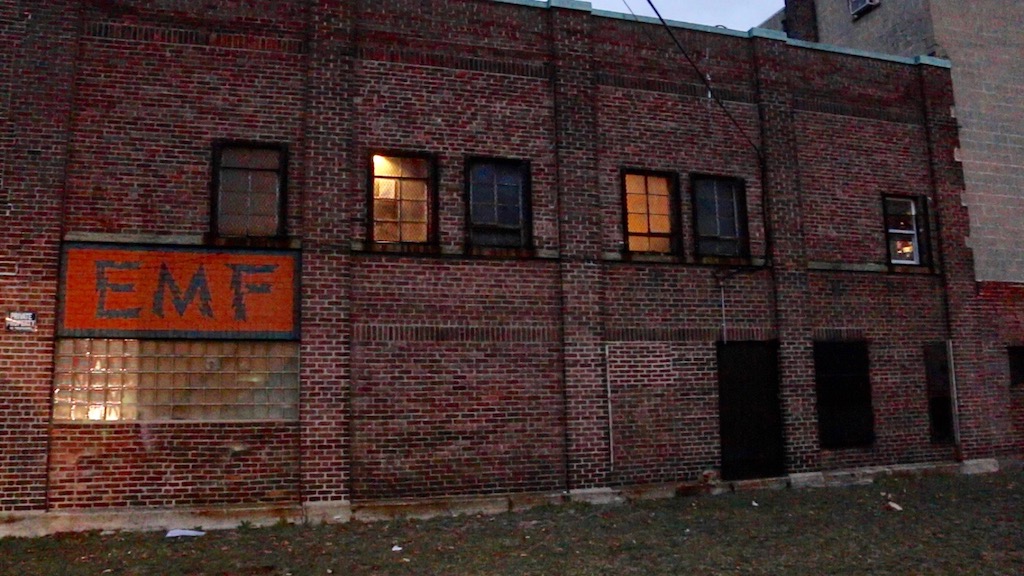 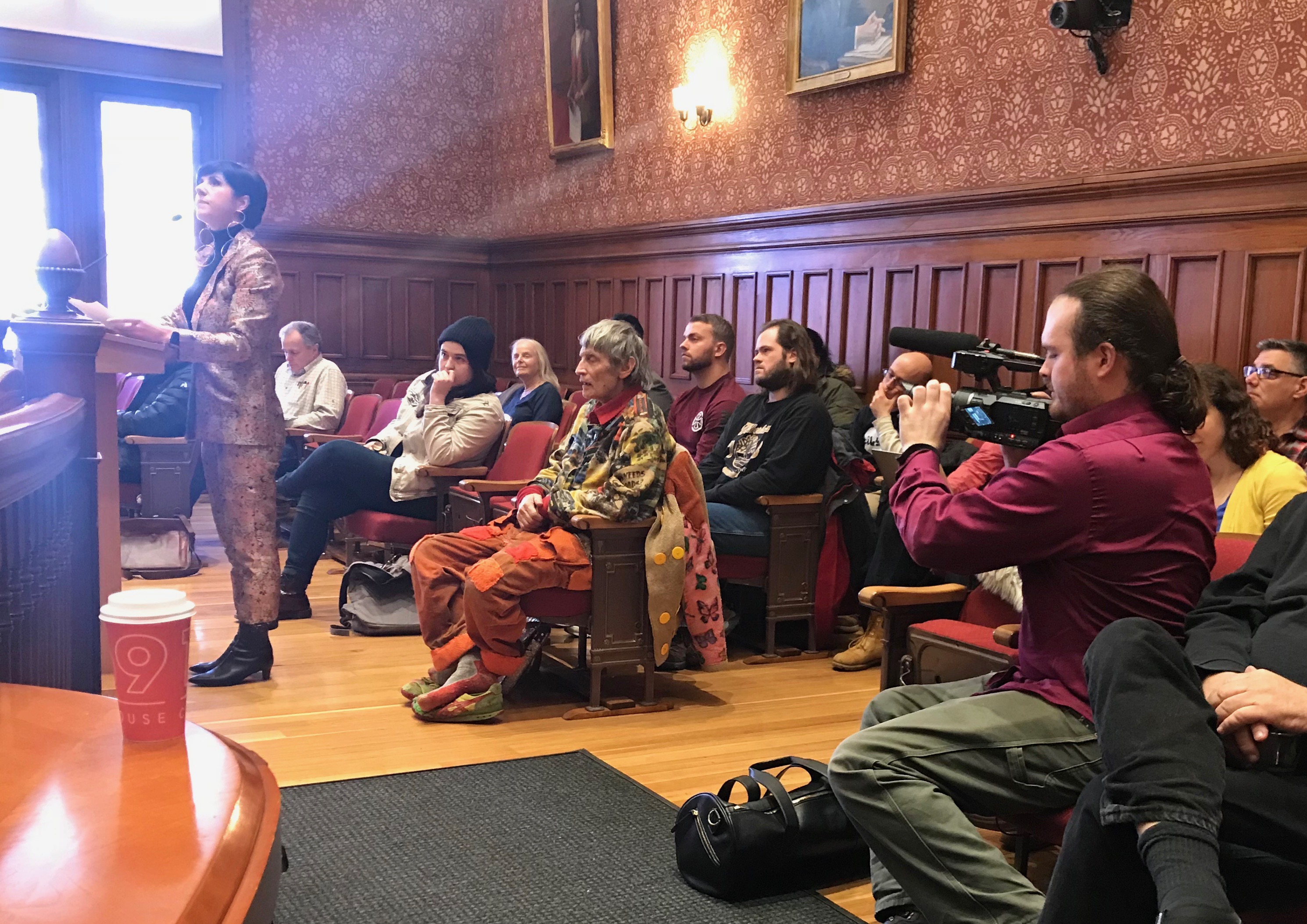 A tentative plan to “keep Central Square funky” by creating and preserving places for musicians and artists to work and maybe live was sent to an economic development committee by the City Council, where it was hoped to get fast treatment – in government terms – and be inserted in zoning as an “arts overlay district.”

Setting rules and ways to encourage property owners to create affordable live/work space, studio space, gallery space and performance space would go from there to the council’s ordinance committee and then to the Community Development Department perhaps in as little as four months, said councillor Dennis Carlone, who leads the lawmaking ordinance committee.

That won’t save the EMF Building at 120 Brookline St., where well over 100 musicians and others will be evicted from practice rooms, art spaces, the WEMF radio station offices and New Alliance recording studios when the building closes permanently in April. The 23,554-square- foot, three-story brick structure, built in 1921, was bought two years ago for $4 million by Trinity Property Management, a company run by Harvard Square Business Association president John DiGiovanni.

Not on the agenda

With that issue not formally on the agenda, Mayor Marc McGovern had to remind the roughly 10 speakers who showed up for public comment that they couldn’t address it directly, but had to find a way to discuss it in the context of the arts zoning.

That brought a scorching response from Ruby Rose Fox, a five-time Boston Music Award winner who teaches inner-city students in the EMF building through a program she created called Gifted.

“If one of my neighbors was stabbed … and they came knocking and screaming at my door and saying, ‘Please, Ruby, call an ambulance, I might die,’ and I said, ‘My god, come in, it’s a good thing you’re here, we just started a meeting to give us a better understanding of the problem of preventing violence in our neighborhood … there’s nothing I can do right now, but I promise you I will work toward preventing this from happening to anyone else,’” Rose Fox said, “that’s what this meeting feels like.”

Update on March 27, 2018: Mike Cann, co-host of “The Young Jurks” show streamed on WEMF Radio, says Ruby Rose Fox has been booked as a guest for the 6 p.m. Saturday show to discuss the EMF Building and arts in Greater Boston.

Rose Fox and others had been involved in an effort in early March to get Cambridge’s Arts Council to help publicize and generate ideas to reverse the EMF evictions, which inspired council executive director Jason Weeks to loop in the head of the Central Square Business Association, councillor Alanna Mallon and others.

But filmmaker Steve Onderick, who also spoke during public comment, said he was part of a group that approached the Arts Council for help more than six months ago.

The artists and musicians told councillors that serious safety issues and contaminated soil had been cited as reasons for the building being emptied of tenants – but their own conversations with Cambridge’s Fire Prevention Bureau and environmental officials left them disbelieving. “I personally followed up,” musician and events curator Anna Rae said. “The building is code-compliant, they had no problems with the occupancy of the building. I also spoke with the DEP … on a first search, there was no record of land contamination.”

An email was sent to Trinity Property Management seeking information about the property and its future use.

“We are losing our soul”

Councillors seemed glum Monday that the creative use of the EMF Building, with its access to mass transit and even free parking, was being taken away from the city and Central Square Cultural District – which lost the Out of the Blue Art Gallery in December to rising rents – before they could protect it or respond to alarms over fleeing artists that have been sounded for many years. (Central Square landlord Patrick Barrett reminded them during public comment that the arts had been a major component of the C2 redesign process left to languish by the city after its final report in 2013.)

The proposed zoning could help in the long run, but “EMF is a huge loss, and we are essentially saying there’s nothing we can do about it,” councillor Quinton Zondervan said. By emptying the city of artists, “We are losing our soul.”

Putting arts zoning in place now feels like closing the stable door after the horse has bolted, “which goes to our ability to get out ahead of situations,” vice mayor Jan Devereux said. “We would have known who this buyer was, and we have the ability to talk to that person. This isn’t some [real estate investment trust] with foreign money, this is somebody who’s well-known in the community. If we’d had the two years to talk about what might be the future of that building … maybe we wouldn’t have gotten ourselves in this situation.” 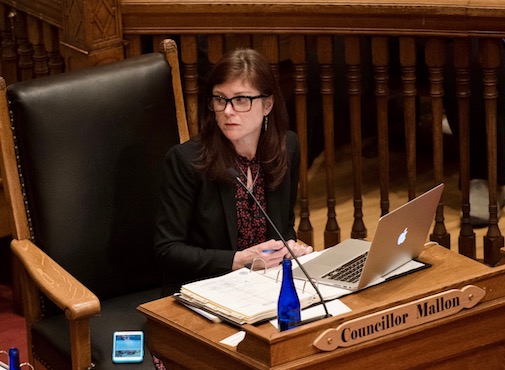 Devereux noted that the fast-developing Alewife neighborhood was in need of an identity that might be fulfilled by becoming an arts center, and councillors couldn’t resist pointing out existing spots that might fill a need left empty when EMF closes: the municipal parking lot next to it, a massive, city-owned building on Windsor street or the space being left behind at 265 Massachusetts Ave. when the MIT Museum moves to Kendall Square – which McGovern said was already the the topic of talks with the Massachusetts Institute of Technology.

The zoning order, though, remains focused on Central Square, which has a state-designated arts and culture district widely seen as lagging.

“The EMF Building is a real loss to our community, and this order is to prevent that type of loss in the future,” Mallon said. “There’s a sense right now that we’re losing our arts and culture and becoming just business-focused … we talk about our innovation economy here all the time. We  need to be protecting and nurturing our creative economy.”

Lowell and Lawrence have done a lot in the area of artist live/work spaces, but Mallon said the best model was the arts overlay district Somerville had in place in its Union Square, where a 30-page zoning document gave Cambridge a starting point for considering construction bonuses for developers who build art along with residential or retail – like Union Square’s nascent Bow Market – while getting relief from parking requirements.

“I’m really excited about bringing this forward. It doesn’t address the needs of the musicians right now, but I’m hoping we can really stem the tide and focus on arts and culture here in Central Square. This is our cultural district. I love it. It’s funky. Let’s keep it funky, let’s keep it weird, really protecting and maintaining what we have but also incentivizing more interesting arts-related uses to come,” Mallon said. “Zoning is the way to do that.”