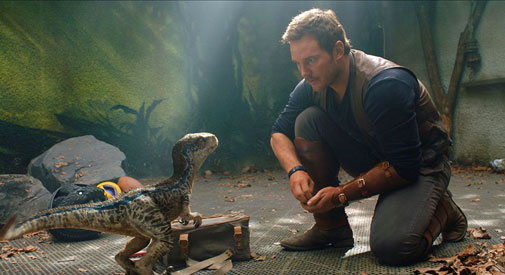 “Jurassic World: Fallen Kingdom” arrives in theaters this week with plenty of dino-wow, as one might hope, but with a bronto-sized side of mommy issues and some sustainability woes to boot. Which to tackle first? Hopefully you’re up on what went down in “Jurassic World,” the 2015 relaunch of the “Jurassic Park” franchise made so indelibly by Steven Spielberg and Michael Crichton back in the 1990s. Those first three “Parks” dug deep into our imaginations, with their all-too realistic renderings of T-Rex and lethally heeled velociraptors, and they slew at the box office. “World” marked a respectable redux, but “Fallen Kingdom,” gets weighed down with a fossil-heavy backstory and never quite achieves the amusement ride thrill that made its ancestors such scary good fun.

As with all the “Jurassic” flicks, the action begins down in Costa Rica, at the theme park from the last chapter that’s been abandoned and overrun by rampaging dinos. The crisis du jour becomes increasing volcanic activity that threatens to “re-extinct” the “de-extinct” lizards (okay, birds). Congressional debate rages about saving them or not and, blessedly, Jeff Goldblum looms at the epicenter with rapturous logician metababble; then, just like that, the crew from the last “World” – the park overseer (Bryce Dallas Howard) and raptor wrangler (Chris Pratt) – are back as part of a conservation effort to get as many of the dinos as possible off the island and to a “sanctuary.”

The pair go in at the behest of a benevolent billionaire (James Cromwell, in a requisite but wispy role) who partners them with a team of big game hunters that feel a lot like the bunch from the second film, “The Lost World: Jurassic Park,” (1997) and are led by Ted Levine, surprisingly not too far from his Buffalo Bill in “Silence of the Lambs.” There’s a lot of Spielberg DNA to be found in “Fallen Kingdom” – Pratt’s smug, everyman posturing and action sequences feel right out of “Raiders of the Lost Ark,” but just because you clone something doesn’t mean you get exactly what came before. That brings us back to those mommy issues: There’s a precocious little girl by the name of Maisie (Isabella Sermon), who may or may not be the billionaire’s granddaughter, and there’s Blue, the empathetic raptor from the last “World” raised by Pratt’s Owen, who holds the key to controlling the new line of mega-raptors being weaponized for trade and profit. Yes, sadly it all comes down to military-industrial complex shenanigans, avarice and hidden agendas.

Given the one-percenter station of many of the players in the film with their fingers on the stings, I kept asking myself, how much is too much? Why do billionaires need a lousy 20 million for ankylosaurs? The answer to which can only be power and control. The pomp and arrogance through which it’s executed feels far too profound a metaphor for the carnivorous control that’s taking hold across the country these days. Perhaps I’m reading too much into it, but given the big, bloody slab being dangled, one has to bite.

The film’s natural subtext of “don’t mess with Mother Nature” – because payback’s a tooth and claw feng shui session – gets executed with perfunctory perfection at the apt hour. The wrap-up of the film, directed by Spanish director J. A. Bayona, best known for the arthouse horror film “The Orphanage” (2007), becomes its most provocative and resonant moment. Much of what precedes it is dull despite all the thrashing, and it doesn’t help that all the combative-romantic chemistry between Pratt and Howard in the last “World” has seemingly gone the way of the dodo (no, they have not been brought back yet). Overall, “Fallen Kingdom” makes it feel like the series might be done for, even though where we end feels like a launching pad – a place of opportunity, laden with possibility.