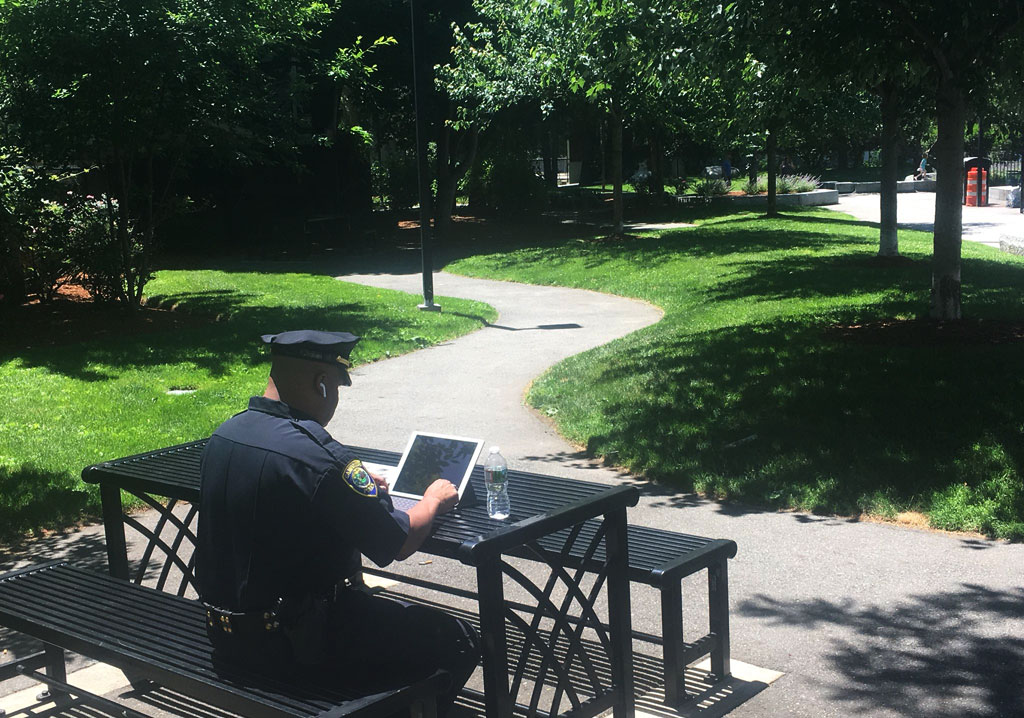 As requested by city councillors concerned about gun violence in The Port neighborhood, the Cambridge Police Department has formed an internal task force and assembled a massive presence in the neighborhood – teams including supervisors, detectives and patrol officers who will work long hours “for the foreseeable future” in uniform and plainclothes to supplement existing patrols on foot, bicycles and in patrol cars.

In addition, a group overseen by two deputy superintendents is meeting to coordinate efforts and do week-to-week evaluations that can be reported back to city officials. But “we’re not just in the building evaluating strategy, this is a boots-on-the-ground approach,” said Jeremy Warnick, director of communications and media relations for Cambridge police. In both cases, resources have been reallocated from other neighborhoods, he said.

The CPD Port Task Force described Thursday went into effect this week after 10 gunfire incidents this year – nearly all early morning incidents resulting in no reports of victims in The Port, with two taking place in the Wellington-Harrington neighborhood.

(An incident early Thursday was not part of the pattern: The victim, a 36-year-old homeless man, said he was sleeping in front of the Central Square Library before being awoken by a young man wearing all black and a baseball cap who shot him several times in the stomach and arm with what is believed to be a pellet gun, police said.)

“While all incidents of violence are unnerving, the frequency and emboldened nature of recent gun violence in The Port is increasingly disturbing and cannot be tolerated by the police or the community we serve. By establishing this task force and being active in the neighborhood throughout the summer, we intend to restore a sense of safety,” said Police Commissioner Branville G. Bard Jr.

The department also plans to increase outreach through summer youth and community center programs and collaborating with the faith-based community, participating in peace walks and community barbecues, Warnick said. A Focus Deterrence initiative and Safety Net Collaborative are intended to prevent “the same vicious cycle of someone consistently harming themselves and/or others,” police said in a press release. “CPD will evaluate alternatives to arrest by connecting individuals with relevant resources and treatment, if appropriate.”

The task force was introduced after impassioned but at times sour exchanges Monday by city councillors led off by E. Denise Simmons, a resident of the neighborhood, who pleaded for action for people “who are feeling frightened and unsettled. They don’t want to bring their kids out after sundown. Seniors don’t want to come into Central Square.”

“We want in The Port the same that anybody wants who lives in any other neighborhood, and that’s the ability to go outside, sit on our stoop, walk to the store, go to our neighborhood restaurants and go to our wonderful parks and enjoy ourselves and not feel that we’re going to be in harm’s way,” Simmons said.

“Crime rates are down, but then you hear the shootings. I personally don’t care about the statistics. I care about the gunshots,” Simmons said. “Gunshots that are happening next door to where my 4-year-old granddaughter lives.”

But she also highlighted the despair residents felt about the situation, and the perception that the city and even the City Council didn’t care, noting that some councillors hadn’t shown up in the neighborhood or at meetings where the incidents had been discussed – prompting councillors Dennis Carlone and Craig Kelley to remark that the Safe Streets Safe City initiative meeting to which she seemed to refer had been held without notice to them that would allow them to attend; Carlone said he would have attended but was “stunned” to arrive at City Hall  for another purpose and find the meeting just leaving. Councillor Tim Toomey said that when meetings were called on such issues without invitations to the rest of the council, “it makes us look disorganized.” He urged that all such meetings be organized through the mayor’s office.

More disagreement followed on the wording of the council’s task force order, with Kelley worrying that a call for an “aggressive new strategy” by police would be misinterpreted by officers as calling for aggressive policing techniques that could get quickly out of hand.

Simmons insisted on the language: “Why I use the word ‘aggressive’ is because it’s important that we say to The Port neighborhood that we are really, really serious about seeing something different.”

Much of the effort seen in The Port now is typical for what police do in the neighborhood in summer months, Warnick said Thursday, giving context for the three-day turnaround on a Monday order. Much of the resource allocations were in the works already but “solidified” by the council order.

Mayor Marc McGovern was a co-sponsor of the task force order with Simmons and councillors Alanna Mallon and Quinton Zondervan, but he acknowledged the limitations of what police could accomplish.

“We’re not going to police our way out of this. It’s about jobs, it’s about opportunity, it’s about education, it’s about housing. It’s about people’s basic needs. It’s about guns. And those are obviously longer-term issues to try to solve,” he said. “But this is an emergency, like no other emergency we’re seeing right now, and the folks in The Port and Wellington-Harrington deserve more.”