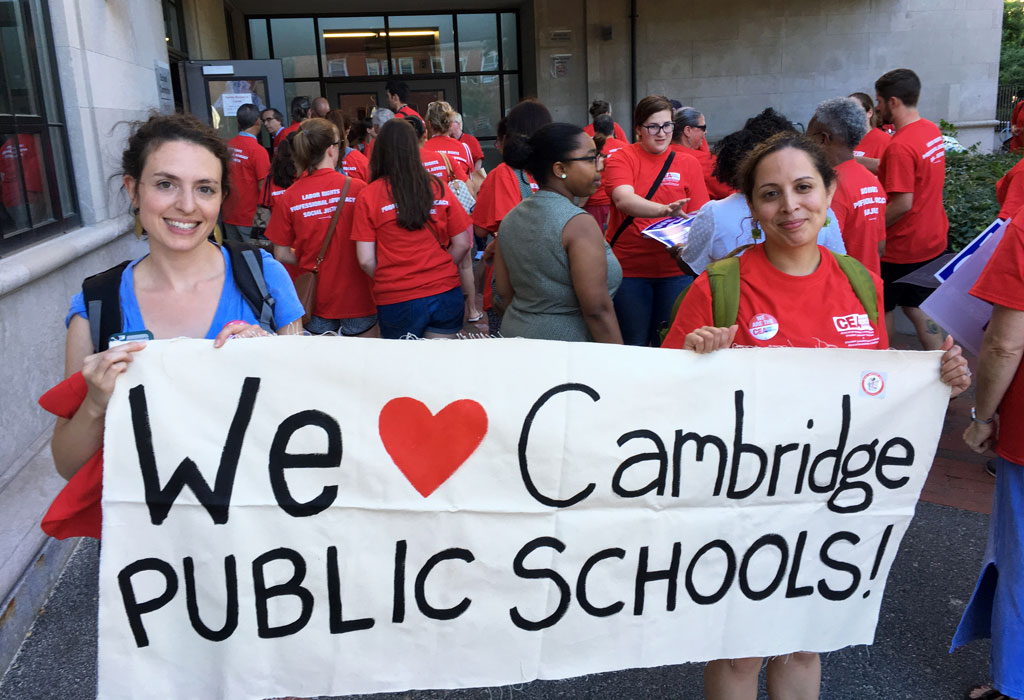 Deliberations on a longer school day, a continuously faltering middle school math program and discontent at the Putnam Avenue Upper School were joined at Tuesday’s meeting of the School Committee by a turnout of teachers and staff urging a successful end to contract deliberations for paraprofessionals.

Members voted to hold a televised roundtable on the “advantages, disadvantages and costs associated with extending the school day” to be held by Nov. 21, underlining the view that this would be “a major public policy change requiring input from the public and the entire school committee,” as member Emily Dexter wrote.

A 2012 plan by then-Superintendent Jeff Young to change start times of many elementary schools, said to be necessary with the opening of four new upper schools, was presented as a fait accompli without public input, and was scheduled to go in effect just a few months later. It packed a standing-room crowd into the King Open School library, and public outcry force the proposal’s withdrawal.

Since a presentation to members May 1 of a joint management labor committee recommendation to increase school time starting in fall 2020 – without details – the administration launched school visits to get feedback, slated to end by Sept. 1. The effort has failed by any measure. The May 16 visit to Cambridge Street Upper School, for example, attracted two parents and one staff member. Parent Daniel Michaud Weinstock said in public comment that administration congratulated attendees at the recent Cambridgeport School visit for hitting the “high water mark” of 24 attendees.

A joint motion by members Patty Nolan and Fred Fantini emphasized equity for middle school math students by ensuring that all sixth- and seventh-grade students can access placement tests to put them in “appropriate instruction” levels – seemingly countering the district’s recent decision to “untrack” and level all middle school math classes. With the meeting eventually running over four hours, Nolan calendared the motion “in the interest of time” and said they would work with the administration to further the issue.

Whether to track or “level” classes seems destined to be a never-ending argument, perhaps especially for math. All subjects are taught heterogeneously in elementary school and all non-math subjects continue to be heterogeneous through middle school, as they have been for years in Cambridge. Before the creation of middle schools, math for those grade years was tracked or not by school: For example, Graham & Parks and King Open were notable for heterogeneous teaching of algebra to all eighth-graders; Peabody and Kennedy-Longfellow had separate “advanced” Intensive Studies Programs. Since 2012, though, middle schools were “aligned” to be similar and have moved between heterogeneous to “leveled” hybrids, changing almost every year. The district recently announced returning to heterogeneous math classes next year.

That decision brought a concerned family to public comment. Grace Gillig, finishing seventh grade at the Rindge Avenue Upper School, urged that “it is in the best interest of students to be assessed and placed in the appropriate math class. In my entire middle school experience, I’ve barely learned any new math concepts. During most of my sixth-grade math periods, I sat alone at a table doing advanced math packets.” Grace’s mother, Chris Cuttitta, said her older son was allowed to move into a higher-level class when he was in fifth grade; for Grace, she said, they were told that “was no longer an option … I would love for every student to be able to have the math that they are ready for,” she said.

Fellow parent Dara Manoach said her daughter is “feeling bored and distracting other students” in the same class because she already knows the content. “Math is part of my daughter’s identity. I want her to steam ahead in it and not feel restricted. I want to give her and other children like her the chance to be assessed and take advantage of the very rich sources” at the high school or in outside programs.

Concern over losing the after-school Math Olympiad program at Putnam Avenue was raised by John Paul Kampazza, a parent of children there and in the Martin L. King Jr. School. His eighth-grade son, he said, went from a “D” to a “B” grade in math largely because of the program, and his rising sixth-grade daughter is an “A” student largely because of the MLK version.

But McGovern was contradicted immediately by the next speaker – one of the volunteers who started and runs the PAUS Olympiad. Parent Jane Chiang said she and other parents volunteer between four and 20 hours a week to run the program, but many parents “are either leaving the school or taking their kids out of club in order to get tutors … so that they can get their kids what they believe is basic math education.” Chiang is especially concerned about families without the resources to get tutoring in lieu of the club, which will end without district assistance in recruiting volunteers and securing a space to meet, she said.

This failure of Putnam Avenue to achieve success, especially in math, has been addressed by a steady stream of families for at least the past two years. In addition to some of the lowest MCAS standardized test scores in the state, only one eighth-grader per year has passed the Algebra I test in that time. Parents spoke about the urgent need for something to be done despite previous votes of support from the committee and assurances from Salim that “appropriate resources will be made available”; seeing unimproved scores and continuous complaints of behavioral issues, some ineffective teaching and high teacher turnover, some urged a co-teaching model like the one at the Haggerty School and Cambridge Street Upper School math program.

A related motion by Dexter, Fantini and Laurance Kimbrough for the administration to work “with urgency” next year on including “all stakeholders [in] transforming” elementary and upper schools was voted down after being edited to half its length, with only Dexter and Kimbrough voting in favor. Most members, and the superintendent, appeared to think the motion unnecessary (with Bowman saying “it sends the wrong message” by suggesting there is no urgency now); Fantini said that he had co-sponsored because “we heard from students who expressed disappointment and urgency. For me the spirit of the motion is that we want to take matters seriously.”

More than 60 teachers and staff packed the committee room to support finalizing a contract with the district’s paraprofessionals. Dressed in red Cambridge Education Association shirts, members from all staff units presented a petition with 685 signatures urging the committee and administration to “strike a fair bargain.”

Several members said they appreciated the successful agreements struck for clerical staff and substitutes – both passed unanimously at the meeting – but “want the same consideration.” All contracts, typically for three years, are scheduled to expire in August. Negotiators for the committee are Fred Fantini and vice chair Kathleen Kelly.

“It is exasperating to hear that the current [proposal for paraprofessionals] is being promoted as generous,” said paraprofessional Adaline Lining, who works at the King Open School. “We are scraping by, living paycheck to paycheck.”

“It’s not just about the money,” she continued. “Paras are asked to cover for teachers on a daily basis. Across the state, paraprofessionals are referred to as ‘teacher’s aide,’ ‘teacher’s assistant’ [but when] teachers are pulled from the room, we are the lead teacher. It is above and beyond our typical duties. The true root of the problem lies in the teachers being unable to be in their classrooms … There must be compensation for those who do the work when they are gone.”

This post as updated June 26, 2018, to correct the school at which paraprofessional Adaline Lining works. It was updated June 30, 2018, to remove the name of a parent speaker whose testimony had been tied incorrectly to other parents’ advocacy.