Recess standards win support of officials, but what kids get at schools can fall short 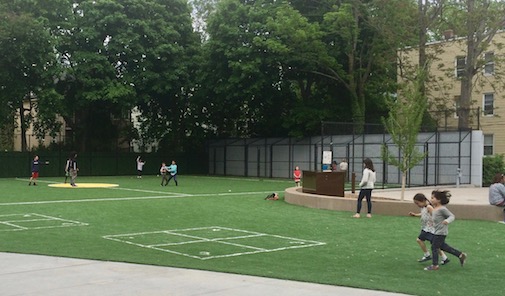 Recess standards win support of officials, but what kids get at schools can fall short

A plea for more recess time – along with renewed alarms that Cambridge Public Schools were not following their own recess policy – was heard by the School Committee on Feb. 6, part of a 4.5-hour meeting that included a televised roundtable on the superintendent’s District Framework.

Six parents, a teacher and one fifth-grader spoke to advocate for more recess as the committee backed a motion by members Kathleen Kelly, Emily Dexter and Manikka Bowman to support state bills requiring that elementary students get at least 20 consecutive minutes per day of “unstructured free-play recess.”

The motion passed easily, supporting Senate and House bills meant to guarantee recess time for kindergarten through fifth grade. (The vote was six in favor, with Mayor Marc McGovern absent due to the flu.) The bills say “‘free play’ means an unstructured environment …supervised by appropriate school personnel or staff.” It’s not clear if that definition would be met by outside recess organizers, such as the Playworks organization tried recently at the Dr. Martin Luther King Jr. and King Open schools.

The bills also say recess time needs to be included in “structured learning time requirements … and may not increase the total number of hours required in the school year.”

This is important because state regulations determine that all elementary school students must have a minimum of 900 hours of “structured learning time” in a minimum of 180 days. Time at recess, breakfast, lunch and passing between classes do not qualify. The need to get in required “structured learning time” is often used as an excuse to cut back recess.

Cambridge’s wellness policy, defined by the School Committee, sets a minimum of 20 minutes per day for recess, and stipulates that recess may not denied as a punishment or to make up work. Testimony at committee public comment over the years has asserted that despite these rules, 20 minutes of recess is not always guaranteed. Parents and students have repeatedly cited examples of shortened recess or recess withheld for punishment or to make up work. Principals have sometimes argued that withholding recess “is one of the only tools teachers have.”

There were more examples given last week. Parents Jessalyn Jarest and Rebecca Bailey said during public comment that their Peabody School children get only 15 minutes, if that, and came to the meeting with several more parents and students who supported more recess, saying “many more” could not come mostly because of child care duties. Bailey said teachers also backed the notion that “to move, to exercise loudly and energetically … is a much-needed break from the rigors of the academic day” – and that her second-grader started a petition to get more recess and “very quickly got all the students in her classroom” signed on.

Graham & Parks School fifth-grade teacher Rose Levine introduced student Noah Migbaru, who read his class essay on the importance of a having a half-hour recess each day. His interview with Bob Murray of Ohio State University emphasized scientific data showing that active breaks reinforce learning and memory, allow kids to learn more in the day, and make kids healthier. “And last but not least, kids would have more fun,” he said. “You might be worried that your kids would be too sweaty or stinky, but if recess were longer it would actually be more exercise … and interacting with more kids than just those in your class.” 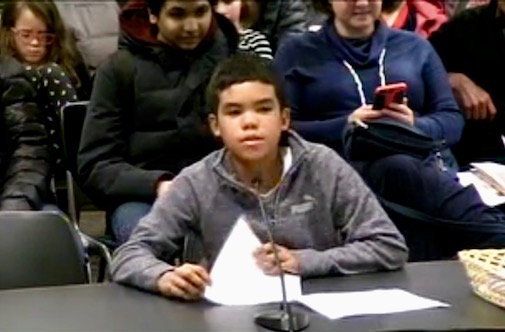 Graham & Parks School fifth-grader Noah Migbaru presents a report on recess to the School Committee in a video screen capture from Feb. 6.

“The more [Noah] researched, the more I reflected,” Levine said. “When I first started teaching, I generally kept recess to a bare minimum because the demands of our profession are virtually unachievable in the few precious minutes of class that we have.” When she adjusted her schedule to give 40 minutes each day outside, “it provided me with a second hour of freshness” from the students.

Parents agreed with Noah’s link between breaks, exercise and improved learning, citing other research. “We should not think of adding recess as cutting into instruction time, but as increasing the efficiency of the instructional time,” parent Sebastian Stockman said.

“Giving up necessary free play for the negligible practice of testing has developed a very rigid system where the demands of the system are being met but the demands of children are not,” Doug Healey said.

The committee motion passed unanimously. (Bowman voted via speakerphone due to an unexplained reason approved by vice chairwoman Kelly. State law says a member of a public body may participate remotely only if physical attendance would be unreasonably difficult).

Member Patty Nolan noted the importance of the bill identifying recess and play as learning time. Member Fred Fantini urged that Superintendent Kenneth Salim and his staff investigate how well Cambridge is complying with the district’s policy of 20 minutes of recess daily. “We need to respond to the voices” of the public, he said.

A late order by Dexter to establish an ad hoc subcommittee on the “upper schools and sixth- through eighth-grade program” was passed unanimously after a modification to charge the existing curriculum and achievement subcommittee with the task of ongoing review of those schools’ “student achievement, parent engagement, teacher retention, student retention, inclusion, school climate and other elements,” because Kelly voiced concern that with six members – the mayor does not serve on subcommittees – they were in danger of too many subcommittees to function well.

The motion was supported strongly by Putnam Avenue Upper School parents Kimberly Mancino and Bill Boehm, who have been pleading publicly for more supports for their struggling school for months. Parents say they have seen no signs of work from a committee motion from more than a year ago to develop a plan addressing what landed the school’s test performance among the bottom statewide.

Members passed unanimously a motion by Fantini and Kelly aimed at strengthening student access to vocational and occupational earning opportunities. Citing a particular collaborative that allows students to enter programs across several communities, the motion calls for a comprehensive survey of available career and technical programs, internships and apprenticeships, and asks the superintendent to develop a plan for implementing better communication to all incoming ninth-graders about those opportunities.

A Dexter motion to expand family and community engagement in the district budget process by outreach directly to parents, high school students, family liaisons, churches and several city community organizations was sent to the committee’s community relations subcommittee to gather a list of existing notifications first.

A motion by the governance subcommittee, chaired by Bowman, to allow the president of the Cambridge Education Association to be allowed six minutes at public comment instead of the three allowed for everyone else, as well as “be invited” by the governance subcommittee to provide an update “on a periodic basis” was calendared by Bowman without explanation, putting off discussion until another meeting.

A decision on an educators’ union grievance response was passed, with Fantini and member Laurance Kimbrough opposed (personnel-related details are not released to the public). Passed unanimously were approval of $147,000 for out-of-district tuition, $26,000 for the purchase of van for the plant maintenance department; and acceptance of a $3,000 increase to a $24,000 Massachusetts Cultural Council grant; and about $1,500 in miscellaneous gifts and other income.