A week of events in Cambridge, Somerville: Fourth of July, ‘The Beer Show’ and more 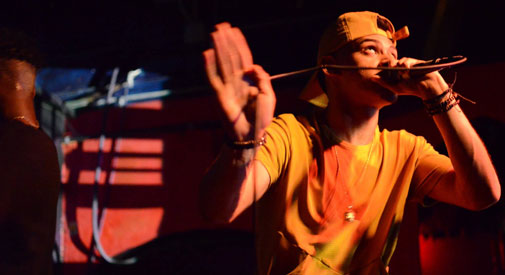 A week of events in Cambridge, Somerville: Fourth of July, ‘The Beer Show’ and more

“Troll 2” from 5:30 to 7:05 and 9:30 to 11:15 p.m. at The Brattle Theatre, 40 Brattle St., Harvard Square. General admission is $11.50. The notorious 1990 cult favorite and “best worst movie” returns, telling a cautionary tale of a family visiting the town of Nilbog, which is overrun with vegetarian goblins. Packaged with “Tucker and Dale Vs Evil.” Information is here.

Harriotte Hurie Ranvig at Story Space from 6:45 to 9 p.m. at Havurat Shalom, 113 College Ave., Somerville. There is a $5 requested donation. After losing her sight gradually between ages 7 and 14, singer and music teacher Hurie Ranvig went on to climb the Himalayas, roller skate (and try ice-skating), cross-country ski. travel Europe and live and study in India for seven years. She tell stories in English, Hindi, German, Spanish and French and is delighted to share her perceptions of the world and answer what it’s like to be blind. Hosted by Bruce Marcus. Information is here.

#MideastCorn comedy open mic by Anderson Comedy from 9 p.m. to 1 a.m. at The Middle East Corner, 480 Massachusetts Ave., Central Square. Free. Comedians of all levels take to the Middle East corner cafe stage to perform a quick set; audiences get a fast-moving glimpse of comics just starting out and pros trying out material along with their guaranteed laugh getters. Information is here.

Fourth of July at Bow Market from 11 a.m. to 11 p.m. at Bow Market, 1 Bow Market Way, Union Square, Somerville. Free. There’s beer from Remnant Brewing at a bring-your-own-grillables event where this retail and food center provides the grills and fuel. At 8 p.m. the courtyard becomes a dance party with DJ 7L of Vinyl Index. Information is here.

Fourth of July Fireworks at 10:30 p.m. watched from along Memorial Drive. Memorial Drive is considered the best place to watch the 23-minute fireworks shot over the Charles River as part of the Boston Pops’ Fourth & Fireworks concert, which begins at 8 p.m. in Boston with singer-songwriter Rachel Platten, Rhiannon Giddens of The Carolina Chocolate Drops, Indigo Girls and Rita Moreno. Radio station WMBR-FM 88.1, run by Massachusetts Institute of Technology students, will do its third annual broadcast with on-the-street reporters and program commentators interviewing people outside the steps of Walker Memorial, and it promises live narration of the fireworks show “with a special twist.” Information on the broadcast is here.

Old Powder House public opening from 6 to 8 p.m. at Nathan Tufts/Powderhouse Park, College Avenue and Broadway, Somerville. You may have passed by the powder house hundreds of times over the years, but the Somerville Historic Preservation Commission offers a chance to get inside as docents in period clothing run tours around the park with a historic narrative of the important sites. Information is here.

“Westworld” at The Brattle Theatre, 40 Brattle St., Harvard Square. General admission is $11.50. See where the HBO series got its start in a 1973 film written and directed by Michael Crichton in which two rich guys on vacation at a futuristic Western theme park are relentlessly pursued by a glitchy, murderous automaton. Information is here.

“The Pineapple Diaries” screening and writing workshop from 7 to 9 p.m. at The Center for Arts at the Armory, 191 Highland Ave., Somerville. Free, but RSVP here. The writer and director of the Boston-based comedic web series “The Pineapple Diaries,” Paloma Valenzuela, delivers an interactive monologue in the form of a writing workshop, with screenings from the series. Information is here.

Mistress Elizabeth tours Colonial Cambridge sites starting at 11:30 a.m. at First Parish Cambridge Unitarian Universalist, 3 Church St./1446 Massachusetts Ave., Harvard Square. Free. Arlington independent scholar Donna La Rue becomes Mistress Elizabeth each Saturday in July and August, including 11:30 a.m. sessions of children’s games, stories and lessons on such things as how to write with a quill pen and card and spin wool; 1 p.m. tours of the church, school and tavern sites, including three early buildings in Harvard Yard; and at 3 p.m. in a graveyard tour she discusses gravestone carvers, the differences between stones for the well-to-do and the impoverished of the town and more. Information is here.

“Conflict Zone: A Play of Mental Health and Other Wars” at 3:30 p.m. and 7:30 p.m. at Outpost 186, 186.5 Hampshire St., Inman Square. General admission is , or $15 at the door. Israeli-American musician and artist Leahy Ardon performs a one-hour solo show about recovery from an eating disorder, touching on wars internal and external and promising to leave the audience “touched and shaken” with laughter and tears. Information is here.

The Beer Show opening reception from 6 to 9 p.m. at Washington Street Art, 321 Washington St., Somerville. Free. This art show all about beer (on view through July 28, with regular gallery hours Saturdays from noon to 4 p.m.) has a bit of everything: sculpture, painting, multimedia, photography, music and more from artists including Jill Comer, Maggie Cedarstrom, Jamu White, Lee Kilpatrick and Mary Lewey. Information is here.

New England Music Improv Experience showcases at 6:30, 8 and 10 p.m. at ImprovBoston, 40 Prospect St., Central Square. General admission is $18. Musical improv comedy actors have come from all around to take part in an intensive four days of workshops to hone their craft, then put on these marquee shows open to the public. Information is here.

Doppelgang Music Showcase Vol. 2 from 7:30 p.m. to 1:30 a.m. at Sonia, 10 Brookline St., Central Square. Tickets are $10 in advance, or $15 at the door. The Doppelgang crew (pictured) has selected its top hip-hop, R&B and live performing friends from the area – P. Goods, AR, Brandon James, Mariano Xavier and Spacey  – and added the visual art of Aldora Barrow and Joey Free for this showcase. Information is here.

Summer BCMFest from 10 a.m. to 9 p.m. Sunday on Palmer Street, Harvard Square, including  a paid brunch show, free outdoor festival and evening show for which tickets are $18. This isn’t as big a deal as the winter version of BCMFest, which bring in more than 100 performers over the course of a weekend to celebrate Irish, Scottish, Cape Breton and other Celtic music. But there’s still two and a half hours of free entertainment starting at 2:30 p.m. out on the street with Scottish Fish and the progressive folk/traditional/fusion quintet Pumpkin Bread. Before the free stuff comes a Live Music Brunch inside from 10 a.m. to 2 p.m. with fiddle-piano duo Chris Overholser and Utsav Lal; after the free stuff comes a ticketed evening performance inside again with the duos Ari & Mia (pictured) and Matt and Shannon Heaton. Information is here.

Brew Haha at the Armory from 7:30 to 9:30 p.m. (doors at 7 p.m.) at The Center for Arts at the Armory, 191 Highland Ave., Somerville. Free, but RSVP here. This relaxed Sunday night show typically brings in seven or eight skilled comics – and if the comedy doesn’t do it for you, the beer selections in Aeronaut’s taps should. Information is here.