‘Ant-Man and the Wasp’: Universe gets bigger as a superhero team aims for the microverse 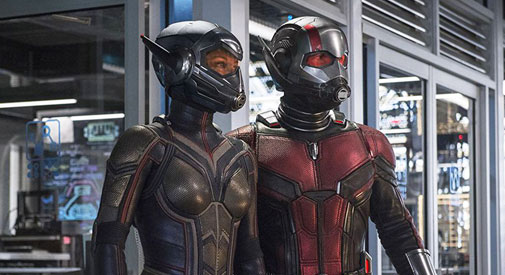 ‘Ant-Man and the Wasp’: Universe gets bigger as a superhero team aims for the microverse

There’s plenty big and small in “Ant-Man and the Wasp,” and I’m not talking about the diminutive or gigantic sizes its superheroes can achieve – and do, often and to great effect – but the elements of film. On the small, there’s a hive of plot activity, but little of it resonates or at least feels fresh or smart. On the big (or gigantic) is a kick-ass ensemble that plays off its sharp leads smartly, with fervor and punch in every frame. 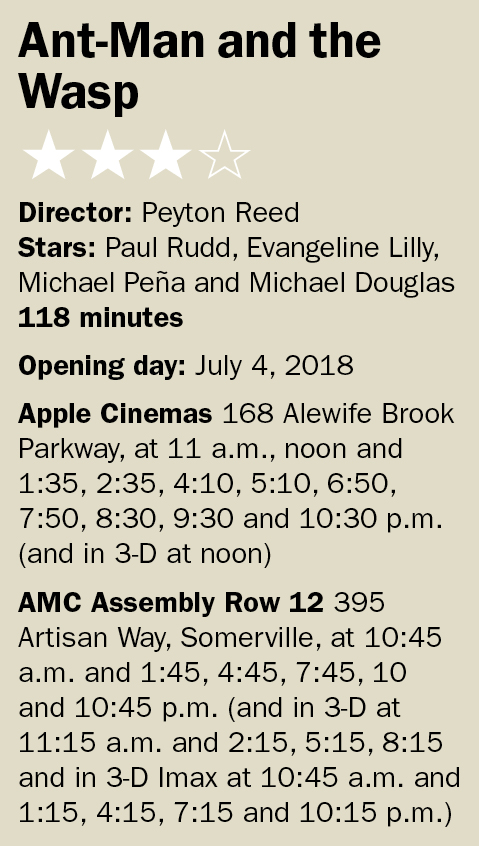 For those of you who missed the cornerstone “Ant-Man” a scant few years back in 2015, you don’t need to back up and catch that less interesting flick before diving in. What you do need to know is that “Ant-Man” is part of the whole Marvel Universe run by Disney and that the hero known as Scott Lang (Paul Rudd) sans the suit, is serving the end of a two-year house detention mandated by the FBI for his participation in a fracas over in Germany, seen back in “Captain America: Civil War” (2016). It’s also why Ant-Man didn’t put in a show in Wakanda this year for “Avengers: Infinity Wars.”

All of the crowd-pleasing heat of the film flows through Rudd and his quirky, blue-eyed likability, be it Lang’s wisecracking antagonism of an FBI caseworker (Randall Park, bringing the same sourpuss charm he’s made a career of on “Fresh Off the Boat”) who pops in for random house searches, or his parries with testy ant-suit inventor Hank Pym (Michael Douglas). The on-again-off-again romantic dynamic with Pym’s daughter Hope (Evangeline Lilly), which gave the first film a reason to be seen, bears fruit again and elevates Hope to superhero status as the other half of a bill that can shrink or enlarge. Hank’s also got a magic remote that can shrink cars and even entire buildings if properly configured; and there are those German shepherd-sized ants with massive mandibles that help run Hank’s shrinkable lab.

Fun stuff, but Hope and Hank newly believe they have a chance to rescue mother/wife Janet (Michelle Pfeiffer, who’s not in the film enough) from the quantum plane purgatory she’s been lost in for the past decades (there’s plenty of highfaluting mumbo-jumbo like this, and it’s best to just roll with it). The key to getting the right coordinates to her locale is implanted in Lang’s head through a dream or something of an out-of-body experience. To get there’s something akin to “Fantastic Voyage” (1966), but also one of the least interesting plot threads. Meanwhile, Lang, saddled with an FBI ankle monitor, has gone AWOL and there’s a Tom Wolfe-style restaurateur (Walton Goggins) who moonlights in black-market technology and wants Hank’s shrunken lab, while an entity known as Ghost (Hannah John-Kamen), ever angry and able to walk through walls, wants to disrupt the quantum plane quest for her own ends. Perhaps the most daunting obstacles are Lang’s ex-wife (Judy Greer) and daughter Cassie (Abby Ryder Fortson) who pop in via FaceTime at the most ill-timed moments looking for soccer cleats; even better is Lang’s security firm business partners, Luis (Michael Peña), Kurt (David Dastmalchian), and Dave (Tip “T.I.’’ Harris), who are both burdens and saviors, and quite effective as comic relief.

Peyton Reed, who test drove the cast for the 2015 outing, feels more comfortable and in control this go-round. The action sequences are seamless, funny and, with their use of big-small toggles, ever surprising and fresh. As much as Lilly gets near equal time – and she’s more than worthy – this is the Rudd show, and that’s not a bad thing; he’s just more the loose cannon, while the former “Lost” star anchors the film with emotional stability and grit. The combination of the personal and uproarious scenes such as Ant-Man summoning winged ants for transport that get picked off by a seagull put “Ant-Man and the Wasp” in the comedy-cum-action camp with the first “Guardians of the Galaxy” and “Deadpool.”