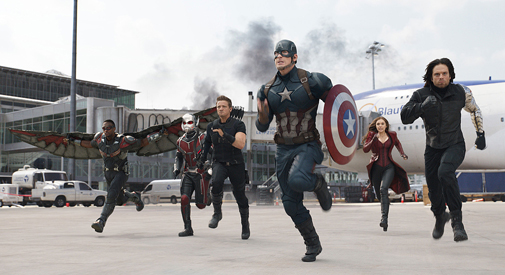 The good news about the latest Marvel project to land on the screen is that it’s livelier and more entertaining than the other “Avenger” offerings – even if this one technically waves the “Captain America” banner. “Captain America: Civil War” is a follow-up to the last Cap adventure, “The Winter Soldier,” with Cap’s troubled old pal and fellow modified, Bucky Barnes (Sebastian Stan) at the heart of the drama again. If you don’t recall, Bucky’s a Manchurian candidate of sorts, a brainwashed mercenary with a bionic arm who’s just as nails-tough and superhuman as Cap. In short, he’s lethal, and because his brain’s been scrambled and put back, he’s a sleeper cell who’s been in the hands of wrong-minded parties.

This has ramifications across the Avengers’ alliance. Bucky’s been underground since Cap put him down, but shadowy images show Bucky pulling off an assassination in Africa and there’s something about a 1991 incident for which we keep going back to video footage and getting new insight what happened and how the pebbles of one cold act ripple through time.

In the now, those ripples have become waves that put the square and righteous Captain America (Sudbury’s Chris Evans) at odds with old steel claptrap, aka Iron Man/Tony Stark (Robert Downey Jr.), first over an accord that seeks to limit the Avengers’ doings because too much collateral damage has befallen the world (a diverted bomb blowing up a building full of innocents, for instance) and later because of darker reasons tied to that mysterious 1991 incident.

When Stark and Cap square off, the teams line up for a street rumble of sorts. You could think of it as the Sharks vs. the Jets. It’s more chest pounding and posturing, and while there’s no Hulk or Thor in the mix, Spider-Man (Tom Holland) and Ant-Man (Paul Rudd), newly drafted, steal the show with wide-eyed naiveté and mini-man maxims. it’s a delicious add to the regular bang-boom-pow auto cycle. Many of the usual suspects, such as Scarlet Witch (Elizabeth Olsen), and other additions, such as Black Panther (Chadwick Boseman), fall into the background; Vision (Paul Bettany) like the similar-colored and suited Spider-Kid, gets some of the best dialogue, especially cooking a meal for the Scarlet Witch to ease her anxieties – the kicker being that he has no idea what paprika or food tastes like, as he’s never eaten.

The film, directed by the Russo brothers (Anthony and Joe, who did the previous “Captain” flick) and penned by several hands tied to several other Marvel franchises, do a good job of looping back to “Avengers: Age of Ultron” and the previous Cap entries. They also, with a hive of super beings buzzing around, wisely keep it all homed in on Cap and Stark. Evans, whose character is something of a two-dimensional Galahad, gets an opportunity to stretch himself opposite Downey Jr.’s snarky and domineering team leader whose id, arrogance and wallet are Trumpian in size. They’re both on the side of the right, but their sense of righteousness could not be any more polar.

Stan’s programmed mercenary, forced to face unspeakable deeds from his past, is by far the most complex persona on display. He’s so brooding and inwardly yearning toward atonement that it’s hard to reconcile that human nuance with the onscreen blur of parkour par excellence. At the end of “Civil War,” over the sea of superhuman stunts and blown-up buildings, it’s Bucky’s troubled warrior – the one who dons no mask or muscle-hugging Lycra suit – who is the most real and most like us. He’s flawed and in need of baring his soul.