‘Avengers: Infinity War’: Marvel’s universe has built to a climax, which isn’t this movie 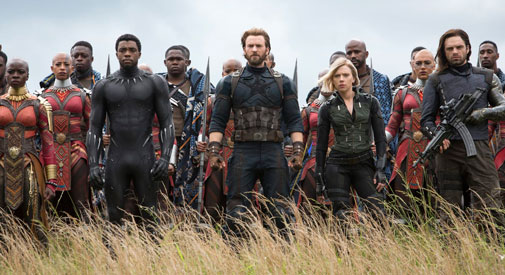 ‘Avengers: Infinity War’: Marvel’s universe has built to a climax, which isn’t this movie

Some might find this a bit of a spoiler, but it’s really more of a public service announcement: If you go into “Avengers: Infinity War” thinking it’s a neat, trim chapter like “Avengers: Age of Ultron” or “Captain America: Civil War” let me set you and the record straight – this is a “Part One.” Somewhere around the two-hour mark of the two-and-a-half-hour running time, I thought to myself, “How that heck are they going to tie this all up in less than 30 minutes?” They do, kind of, with a massive smackdown on the grassy plains of Wakanda pitting warriors and superheroes against a limitless pack of mutant space dogs, but how it ends isn’t an ending. It’s not even like Han Solo getting frozen in “Empire Strikes Back”; the last scene simply ends. You expect another scene, but the credits roll.

“Wah!” you might think, but a quick walk through IMDB shows myriad actors employed by the Marvel universe have signed up for a mysterious “Untitled Avengers Movie.” I can help all the people at Disney and Marvel: Your untitled film’s title is “Infinity Wars, Part Deux.”

In any case, there’s a lot going on here. Hulk (Mark Ruffalo) can’t get it up, Thor (Chris Hemsworth) needs a new hammer and Tony Stark (Robert Downey Jr.) wants to have a baby with Pepper Potts (Gwyneth Paltrow, who’s in the movie for a long nanosecond). Such mortal melodrama ensues as Thanos (Josh Brolin, rendered a steroidal, giant humanoid via some impressive CGI and live action capture wizardry) scours the universe and acquires a good portion of the coveted infinity stones – if he gets them all, he can wipe out all life with the snap of his fingers and nobody will be able to stop him. A few square-jawed studs say so at various points throughout the film, lest we forget.

Thanos, mind you, isn’t just an evil uber-being, but more of an efficiency expert who sees resources as limited; to get everyone under his thumb and happily cohabiting, 50 percent of all those living and breathing must go. How he has come up with such a formulation is never explained, but it’s often reiterated.

The panoply of personas and power on display here is impressive. Taking the field is the estimable Doctor Strange (Benedict Cumberbatch, a perfect, prim foil for Downey’s snarky Stark), who is in possession of one such stone, Spider-Man (Tom Holland) and the crew from “Guardians of the Galaxy” among many, many others – some in just walk-off glimmers.  The lot that gets the biggest short sheet, however, is Black Panther (Chadwick Boseman) and the Wakanda faithful who, without much choice, host the main event – something of a bean-counter miscalculation considering how well that superhero chapter crushed it at the box office, but “Infinity Wars” was likely being wrapped in the editing room as “Black Panther” screened. Naturally the big X-factor winds up being the Guardians’ green-toned Gamora (Zoe Saldana), the adopted daughter of Thanos. The fate of the universe pretty much hangs on the Guardians – and let’s just say it’s complicated.

Directed by the Russo brothers (Anthony and Joe, who did “Civil War”) there’s a lot to contend with visually and story wise. The brothers clearly know what clicks and to keep things moving, and the writing by Christopher Markus and Stephen McFeely (who paired with the Russos on “Civil War”) throws in enough zingers and comic relief to defray all the bang-bang and over-explained motives, though there doesn’t seem to be a much skin in the game as there was with “Civil War” (I know the fate of the universe is nothing to sneeze at, but …). Perhaps the next chapter will bare more fang? If it does anything I just hope they put Captain America (Chris Evans) back in his red, white and blue leotard. The biggest shock of the movie is seeing Cap appear on a European subway platform wearing a suit that looks requisitioned from “The Delta Force” and a beard and bob that are unshakably Barry Gibbs. I still can’t get over the visual.