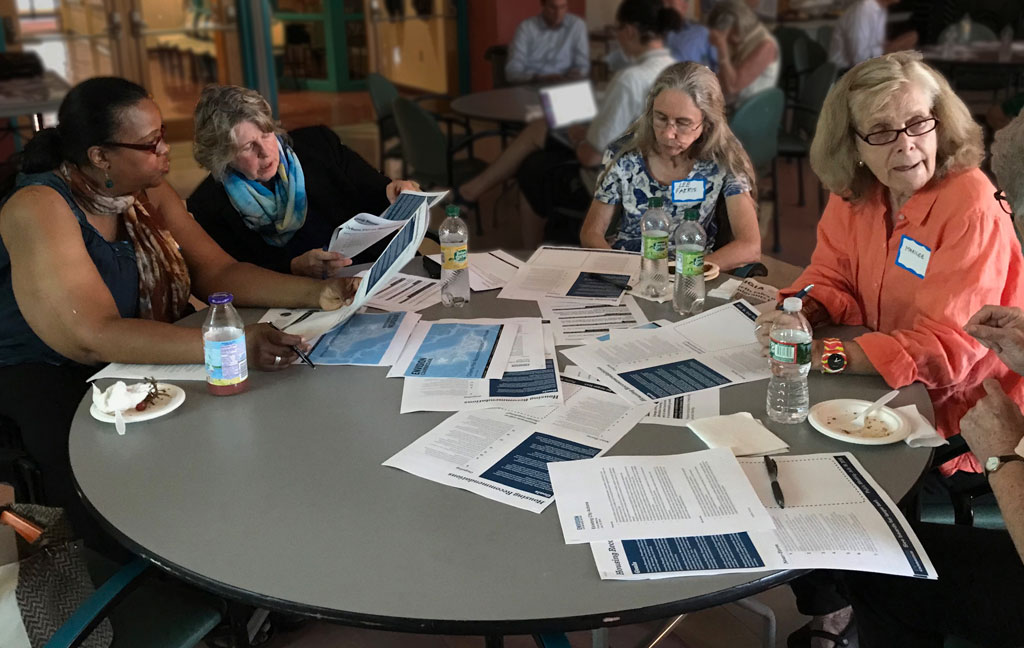 Suzanne Preston Blier, a leader of the Harvard Square Neighborhood Association, looks over documents at an Envision Cambridge open house Thursday. She is second from left. (Photo: Marc Levy)

Leaders of the Envision Cambridge citywide development master plan process reassured residents Thursday that no jump in height is assumed for Harvard Square buildings, and that there is still plenty of process to go before any such proposal is made.

It was leadership of the Harvard Square Neighborhood Association that noted with alarm that a June presentation to the City Council identified the square as a “potential change character zone” for buildings of 11-plus stories, while the Massachusetts Avenue corridor around the square could see heights grow to six stories without the need for a special permit exemption from zoning. The current square, a historic district of its own, is mainly low-slung, with many buildings topping out at three stories.

“These changes [could] be massive,” said Suzanne Preston Blier, a leader of the group, who believes residents, workers and visitors would suffer from added height, while the benefits would go mainly to investors and developers – many of the them from out of state. She was also critical that “the city never bothered to include Harvard Square in the areas they actually did studies for prior to proposing zoning changes.” 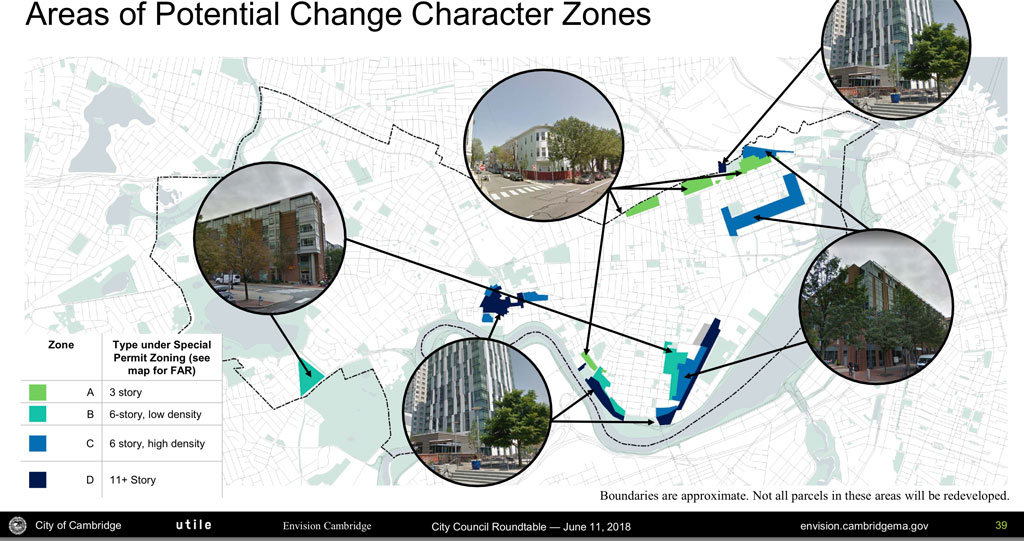 A page from a June presentation shows possible heights of 11-plus stories in Harvard Square.

But the heights are not proposals or zoning, said Melissa Peters, senior planner for the city. “There’s a little bit of confusion. Envision Cambridge is not proposing zoning for Harvard Square. There may be zoning that goes forward, but it won’t be at a neighborhood scale,” Peters said, “We will come up with recommendations for our corridors – Massachusetts Avenue and Cambridge Street.”

Proposals that would change Harvard Square, along with Cambridgeport, Central, Inman and Kendall squares, Charles Street, East Cambridge and the corridors, would get “detailed neighborhood district planning efforts,” she said.

The figures about building height on the presentation were “discussion starters” that came out of Envision working groups, made up of residents, and public walking tours held last summer, said Jessica Robertson, project manager for Envision Cambridge. They appear at that height for discussion because globally, development is clustered around transit – Harvard Square is a hub for buses and has a red line T station – and because of some standard math around construction: six stories is considered the highest you can go with wood-framed construction; 11 stories is considered the lowest point at which more expensive steel construction becomes financially viable.

“There’s going to be a very robust opportunity for public comment. Nothing has been decided,” Robertson said.

Analysis of the heights that alarmed Blier hasn’t been done, and the same figures might not be seen when conversation picks up in the fall, Peters added.

Three public meetings are planned for September to get feedback on how much more population growth is wanted in Cambridge, where it would go and how, according to Robertson and Peters. At the Thursday open house, which drew some 45 people, Peters took questions about population growth from Lee Farris, a leader of the Cambridge Residents Alliance, and deferred answers to September.

A finalized plan with action recommendations is intended to reach the City Council for a vote by the end of the year, with zoning proposals getting a process that might see a vote mid-2019, Peters said.

Blier was not comforted by the reassurances given at the open house.

“I feel like the process is just zooming forward. The moment you begin with the idea you’re going to add density on Massachusetts Avenue and you’re not able to determine specifically what is Massachusetts Avenue as opposed to the various squares [along] it, then there’s an awful lot of gray area,” she said.