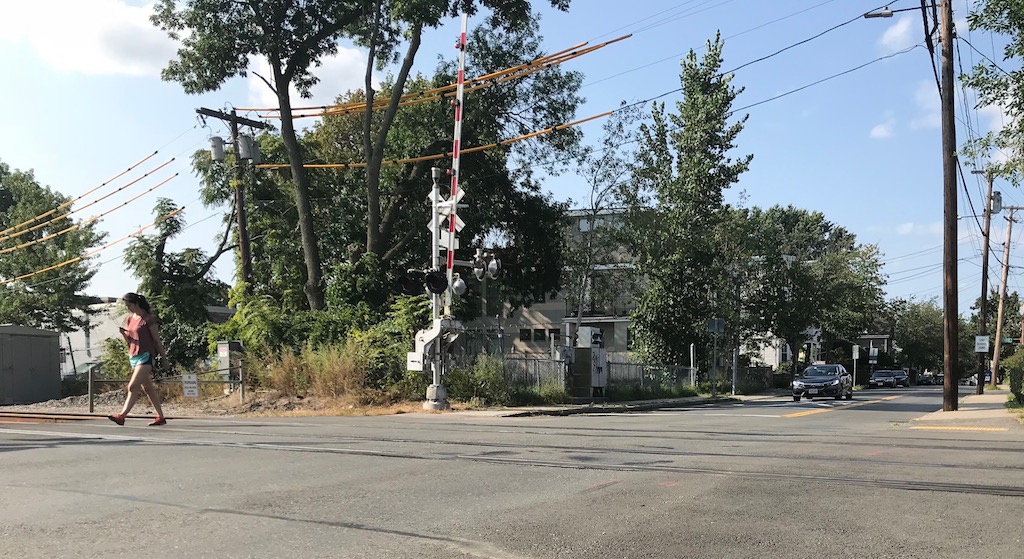 The train crossing at Sherman Street in North Cambridge regains its status as a “quiet zone” for warning horns in September. (Photo: Marc Levy)

Sherman Street train track neighbors will return to relative peace Sept. 15, when a “quiet zone” is reinstated for the first time since June, ending the practice of horns sounding to warn of passing trains from dawn until after midnight.

Construction on the safety improvements required for the quiet zone are set to begin shortly after Labor Day and take around a week, said Joseph Barr, director of the city’s Traffic, Parking & Transportation Department on Friday.

The horns should have been sounding since 2006, when the area lost its “quiet zone” designation; the neighborhood was spared the noise only because of an oversight, according to Keolis, which runs the Massachusetts Bay Transit Authority’s commuter rail. The company discovered the dozen-year error during a federally requested audit.

Thirty trains pass through the Fitchburg line commuter rail crossing every weekday, with each train blaring its horn for about 15 seconds. “While North Cambridge and Neighborhood 9 are bearing the brunt of this massive disruption, other neighbors up to one mile away have complained of the noise,” neighbors said in an online petition that looked to a similar situation in Medford in 2011 for a solution: Temporarily slowing the 79 mph trains so the horns don’t need to be used.

The state rejected the idea, saying it would delay commuters, which left the neighbors with the noise until construction that will stop cars from driving around safety gates – initially to be done with hard plastic “Qwick Kurb” but now to be longer-lasting granite and concrete that can be laid in the same amount of time, Barr said.

Users of the tracks – the state’s MBTA; Keolis; and Pan Am Railways – got a 60-day period to comment, but “with the exception of Pan Am, the stakeholders had no comment,”  Barr’s department said in a post on a Web page put up by the city to keep residents up to date on the situation. “Pan Am’s comment letter offered a general objection all quiet zones, with no specific concerns about the Sherman Street crossing.”

“We do not feel that the generalized objection requires any changes to our plans or timeline for the quiet zone,” the site says.