Constellation Center parcel sells for $50.5M, with arts to be ‘component’ of any future use 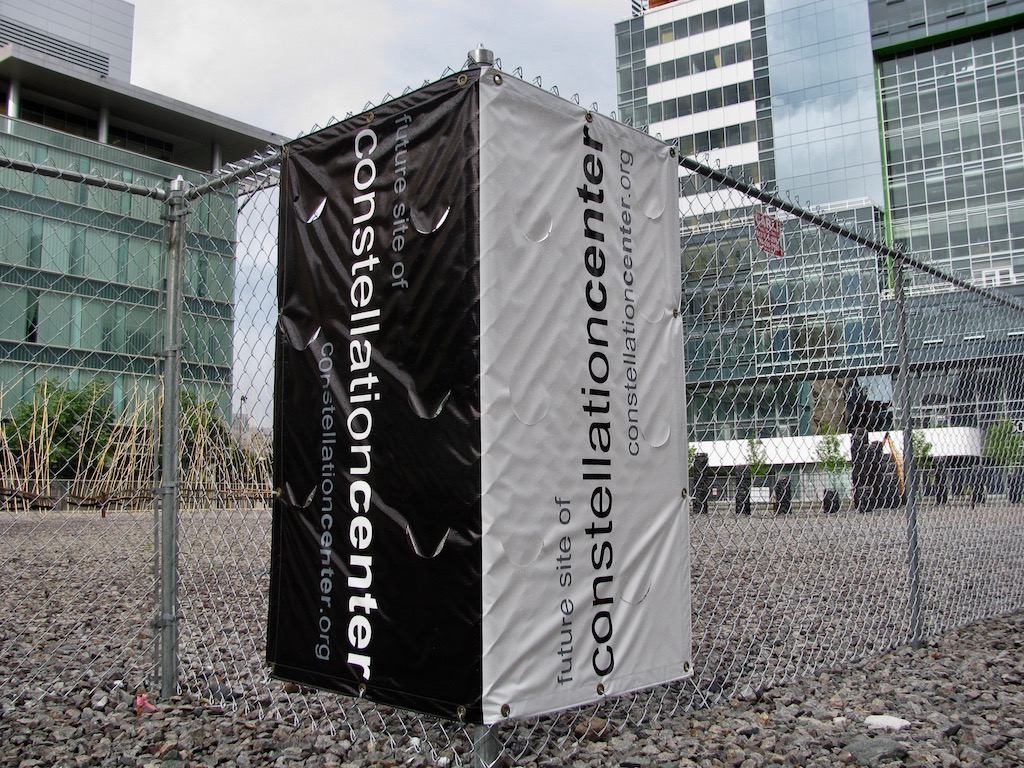 Constellation Center parcel sells for $50.5M, with arts to be ‘component’ of any future use

A sign posted in 2010 promised a Constellation Center for the performing arts in Kendall Square. (Photo: Marc Levy)

The Constellation Center in Kendall Square, where a grand performance hall was promised for nearly two decades, sold Wednesday to BioMed Realty Trust for $50.5 million, according to a spokesperson for the company.

A future use hasn’t been determined for the 35,865-square-foot lot at Kendall and Athenaeum streets, said Jennifer Hanley, an outside consultant to BioMed. But though it won’t be the grand, Lincoln Center-style performance hall once envisioned for the site, there will be an arts and cultural component to what goes up there.

“They want to engage the Cambridge community and are very excited to move forward. Given the history and what has happened at this space, they feel strongly about engaging the community so their input can be integrated into the plans,” Hanley said.

With the current zoning in place for the arts at the site, a change in use would require a change in zoning and in the site’s special permit, which would mean “a lot of public process” with the Planning Board and City Council, said Iram Farooq, assistant city manager for community development.

“Given that for multiple decades there has been this vision for creative, cultural uses there, I think  it would be nice to have that in the mix. But I would imagine it’s going to be something different than what was permitted,” Farooq acknowledged. “From the city’s perspective, we’re waiting to see what actually happens, because there have been these fits and starts. You believe it when it actually happens, and it will need public engagement and conversation.”

“It will be great to see something positive happen on that site,” Farooq said. “People have been chagrined by having this fenced-off area where nothing is happening.”

The cutting-edge, five-hall arts utopia for Kendall Square was conceived in 1996 by tech philanthropist Glenn KnicKrehm and at one time was expected to open in 2012. But fundraising lagged over the years as painstaking acoustical research went on and costs grew – from $85 million in 2007 to $100 million a few years ago to estimates of $300 million given to The Boston Globe in 2015. The plot of land called Parcel C languished, a gravel pit surrounded by chain-link fence, and in October the city said talks had started about instead building a mixed-use complex with ground-floor arts space topped by a tower of housing or business space.

In the years since the center was announced, plans for redevelopment of the neighboring 14-acre Volpe site have included some community uses, and The Foundry in East Cambridge is being built with the arts – and performing arts – as part of its mission. East Cambridge also holds the Multicultural Arts Center, which has been on Second Street since 1985.

Whatever cultural use is proposed for where the Constellation Center would have gone, urban planner and city councillor Dennis Carlone said Wednesday that he wanted to see it oriented toward Third Street, “just to give Third Street some animation. How they do it is key.”

The center’s lot was set aside in 1999 as part of the 1.3 million-square-foot Cambridge Research Park, which began its nonprofit exemption from taxes; after two decades of exemption as a proposed arts center, though, the status changed with the project, and the site returned to the tax rolls Jan. 1, according to Robert P. Reardon, director of the city’s assessing department.

News of the proposed sale in the spring was greeted with outrage by some in the community, who accused KnicKrehm and his Constellation Charitable Foundation of land banking – meaning he sat on developable, tax-exempt land until its value rose high enough for him to sell at a profit. In May, the City Council asked KnicKrehm to hold off on a sale while the city looks into its tax status and zoning history.

With public officials including Reardon out of town, it was not clear whether the analysis took place.

BioMed Realty is a San Diego company with offices in Kendall Square that boasts more than 12 million square feet of rentable space worldwide, mainly in the life sciences field. Its background and a Wednesday statement by president and chief executive Tim Schoen suggested the company might not stray far from its area of expertise when it comes to developing the Constellation Center land:

“BioMed Realty is honored to be selected as the developer for Parcel C and is excited to move forward with this project, given our existing investment in Kendall Square. For over a decade, we have been working to help make Kendall Square the heart of biotechnology and innovation while simultaneously building a robust community for residents and local businesses alike. We look forward to building on this history and facilitating a process that encourages community engagement and input to expand the arts and cultural component in Cambridge as we move the project forward.”

But the City Council wanted whatever happened to the site to include an arts and cultural component for the community, “and that’s something BioMed is gong to uphold,” Hanley said. “There’s more thinking to come on the parcel’s use.”

KnicKrehm, meanwhile, said he would use the proceeds of a sale to create a different performing arts center, though likely not in Cambridge. It would be a “movable feast, for application and realization on one or more sites elsewhere,” he said in April.

A message was left with KnicKrehm on Wednesday on progress on those plans and how the $50.5 million would advance them.