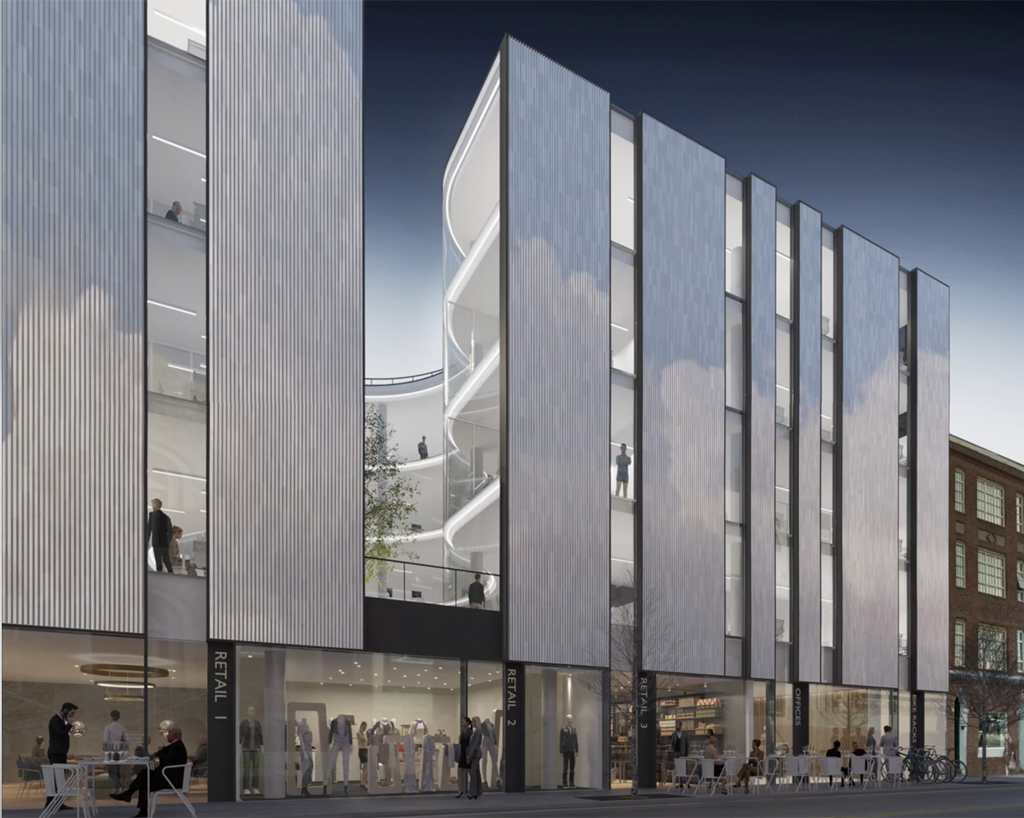 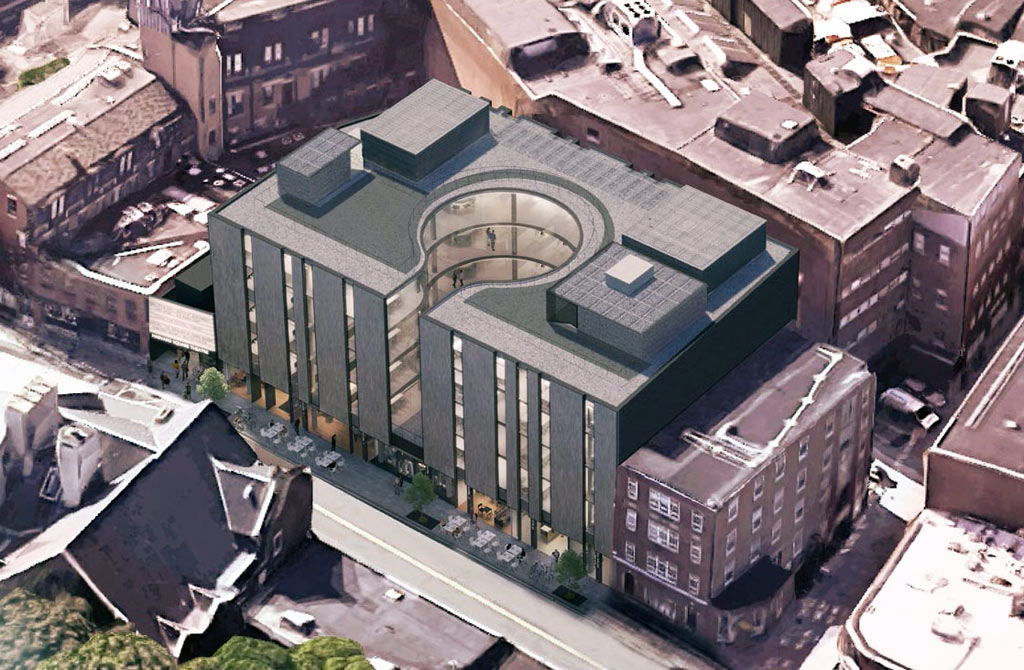 An aerial view of the 10 Church St. proposal The slot in the front of the facade from the project’s “keyhole” feature will cast a ray of light that moves down the street over the course of the day, “kind of like a sundial,” said Elizabeth Whittaker of Merge Architects.

The Cambridge Historical Commission gave positive feedback on the 10 Church St. redevelopment of the Harvard Square Theatre on Thursday, but did not grant the project a certificate of appropriateness, asking the proponents to return with additional details – and a scale mockup that will show its controversial multistory video wall in action.

The project will demolish the old theater, closed since 2012 by prior owners, and construct a five-story contemporary office building with three ground-floor retail spaces totaling 5,800 square feet; two below-grade movie theaters together seating 250 patrons; and a distinctive “keyhole” cutout opening to the street with views into a second-story courtyard accessible only to building tenants. The project, designed in collaboration between Lisbon-based Promontorio and Boston-based Merge Architects,  is expected to revitalize Church Street, whose retailers have suffered substantially after the theater closed.

“We expect to be here for at least two or three hearings,” said attorney Anthony Galluccio, representing billionaire Harvard Square property magnate Gerald Chan. Galluccio said he hoped the permitting process could be as short as 10 months, including the public hearing process before the Historical Commission, Harvard Square Advisory Committee and Planning Board, as well as administrative permitting through Inspectional Services.

The “project is proposing an expressive facade of concealed, fully dimmable LED lights to create subtle moving imagery to spur delight in passers-by,” application materials say. The developers hope to use the wall to allow local Cambridge schoolchildren to display artwork, they said.

The video wall proposal had garnered 10-to-1 opposition in advance letters to the commission, and many questions from the public at the hearing echoed that concern.“The expressive façade has gotten some attention. It’s a somewhat new concept,” Galluccio told the commission. “I would beg your indulgence on this topic because we’re exploring it and we’re trying to get feedback.”

“I really hope I don’t die before this thing is built – or have to move out of Cambridge – because I want to go here, big time,” commission chairman Bruce Irving said. “I think this new piece of architecture is about its surface very, very much. And I just love the idea of activating it with light.”

But Irving cautioned the project team: “I think everyone who spoke tonight has the correct concern: If you blow this, we’re not going to see anything – this has to be done right. And I think you guys are headed toward making it work right. I strongly suggest that instead of backing away from it, or watering it down, that you fine-tune it to the highest level.”

“This is a fantastic approach to a very complicated problem,” member Kyle Sheffield said. “The homage of keeping the theater as a program to the history of the building is a good one … I don’t see holding on to the existing building as something that is necessary.” Sheffield also asked to hear more about how Palmer Street, which runs behind the theater and intersects Church, might be used, especially by patrons exiting the theater. 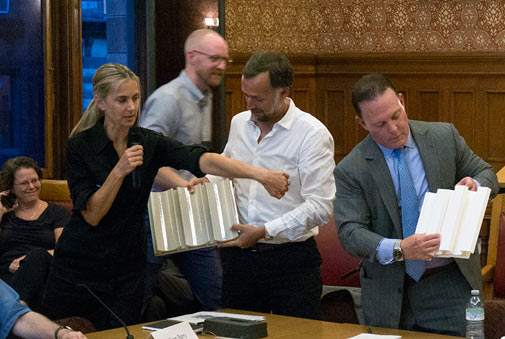 Architects Elizabeth Whittaker and Luís Teixeira present a terra cotta material sample for the video wall at 10 Church St. while attorney Anthony Galluccio shows a 3-D printed model of the concept Thursday to the Historical Commission.

Member Jo Solet asked the petitioners to work more on the sidewalk’s human-scale issues, and praised the vertical window slots of the new design nodding back to the brick pilasters of the existing theater building.

The building was a “bold and elegant statement,” member Bill Barry said, but he lamented that some of the quirkiness of the existing Church Street is being lost. “It’s very polished and very elegantly finished.”

Member Paula Paris asked if the basement-level theater spaces could be used by nearby performance venues such as Club Passim, and asked the petitioners to explore working with the MBTA to encourage the use of the Church Street exit from the Red Line.

Charlie Sullivan, the commission’s executive director, gave the petitioners some concrete things to work on. They should build an outdoor working mockup of the video wall, at least 6 foot square, that can be put on a building or put up outside. “There’s so many ways this could go wrong; we just need to see the physical character of this.”

Sullivan acknowledged a question from Cambridge resident Carol O’Hare, who had asked for more specificity about the operating parameters and restrictions about the lighting. He recommended the petitioners provide a map that shows from a larger area where this would be visible: “In the same way the Sheraton Commander sign – the red neon – is visible from unexpected places around the city, so might this be. Again, that is not necessarily a bad thing.”

Although the hearing ran nearly 3.5 hours, with extensive “questions of fact” from the public, the commission took only limited public comment from those remaining in the audience, advising them that they would continue to have the opportunity to comment at future meetings. Questions raised focused on the light from the video wall; shadows cast by the building, which is 14 feet taller than the old; and the lack of a ground-floor access to the courtyard.

This post was updated Sept. 10, 2018, with comments from Historical Commission member Paula Paris.