‘Bad Times at the El Royale’: You can check in, then suspect no one in this noir gets out alive 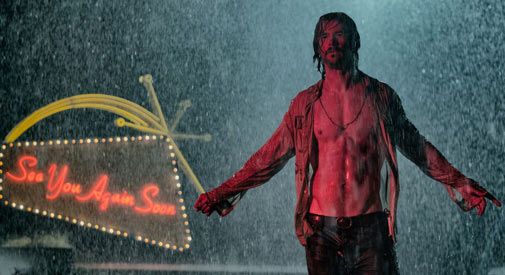 ‘Bad Times at the El Royale’: You can check in, then suspect no one in this noir gets out alive

“Bad Times at the El Royale” is a knuckleball-noir, a den of thieves stuffed with double agendas. The star of the film, besides the ripped abs of Chris Hemsworth or sexy boot-wearing waif Cailee Spaeny, is the remote resort of the title, once a grand casino straddling California and Nevada (there’s a red line down the middle of the lobby, and you can drink only on the California side). It’s seen better days, but lost its gambling license. Needless to say, few people check in; by the time the movie is over, even fewer check out. 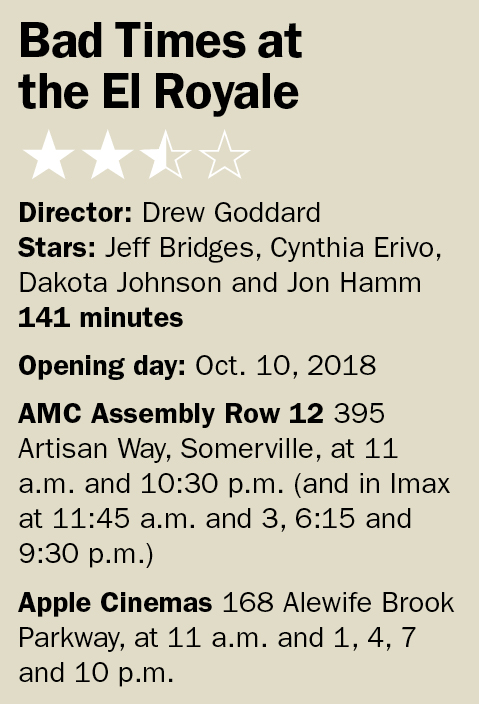 The time is the Nixon-tainted ’70s, so cellphones are not a thing, but wiretapping and one-way mirrors are. An amiable reverend (Jeff Bridges) and a backup soul singer (Cynthia Erivo) check in first. Then there’s Jon Hamm, right out of “Mad Men” as a vacuum cleaner salesman, and Dakota Johnson, who zips in Tarantino-hip in a mod model muscle car with a bound bundle in the trunk. Not everyone’s whom they pretend to be, and the skittish hotel manager (Lewis Pullman, son of Bill, excellent in a role that seems designed for the late Anton Yelchin) bears the weight of past horrors in the hotel and has demanding owners to answer to. The inn has a few secrets as well.

As the sands shift and the mother of all storms descends, the tension rises. What’s buried under the hotel? Who is the mysterious being fled by Johnson’s Emily Summerspring and her sister Ruth (Spaeny)? Plus there’s the gruesome murder of a couple nearby that we hear about over and over on TV, with the killer still on the loose. Deep Purple and some lesser-known Motown kick up the scene – something that’s needed, because at almost two and a half hours “El Royale” is nearly an hour too long (but stylish nonetheless). And though directed by Drew Goddard, whose debut, “Cabin in the Woods” (2012) was a breath of fresh air to the horror genre, the film overplays moments. The plot, which in premise bears much in common with James Mangold’s 2003 Nevada hotel thriller “Identity,” loses its enigmatic edge a little over halfway in, and many of the more likable souls perish far too soon. But fear not, everyone gets a flashback, and certain scenes get replayed from multiple POVs. They’re neat devices, but not every character comes out feeling fully sketched.

Hemsworth, who played beautifully against his Thor persona in “Cabin in the Woods,” isn’t given much to do here as a Cali-sun god and cult leader – Jim Morrison infused with the cocky cold-bloodedness of Charles Manson. It’s a big, hammy bone, and it gets well gnawed. The camp mostly works, while Bridges and Johnson hold the fort, Spaeny and Pullman add flourishes of manic quirk and Erivo adds soul, social context and glorious chops. The Watergate fiasco and a MacGuffin that could be tied to JFK loom at the corners, but they’re mostly distractions; the film is best when characters sit and banter over whisky, even if their hands are tied and a gun is to their head.