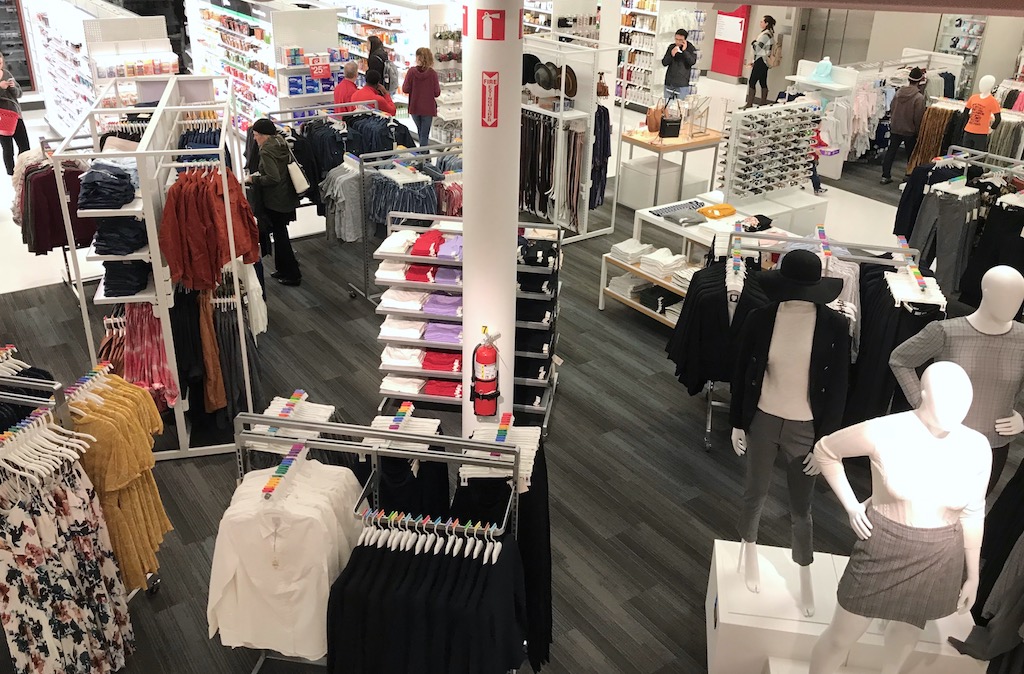 The new Target in Porter Square emphasizes apparel to stand out from nearby businesses, a store manager says. (Photo: Marc Levy)

The public got its first look Tuesday at the Target in Porter Square during a ribbon-cutting, though the store opens officially to customers Wednesday.

It is shiny, bright and fresh, and comes complete with groceries, health products, housewares, toys, arts and crafts gear and other stuff that can be found in greater variety right across the street at a 24-hour Star Market and 24-hour CVS as well as Tag’s Hardware, Porter Square Books, Henry Bear’s Park and a Michaels store – essentially duplicating the situation Walgreens encountered when opening in the same location in August 2013 and closing less than two years later, in July 2015.

Aside from the cult of Target, which was ranked the 10th most valuable retail brand in the world in August by the consultant Brand Finance, and a bit more square footage, what will keep Target from sharing the fate of Walgreens?

“Apparel,” said store director Chelsea Lucas, asked what Target had that was unique from the businesses across the street, many locally owned. “I think that’s where we’re going to do really well.”

Invited customers were encouraged to shop, celebratory cupcakes in hand.

The store emphasizes clothing, including sections for women …

… and for men, along with children’s wear and athletic apparel.

There is a small selection of groceries, including produce.

There is also a toy aisle …

… and an assortment of housewares such as towels.

The duplication in services “was taken into account” in crafting the store for North Cambridge, Lucas said, so the ground floor is turned over entirely to beauty, wellness and apparel, with a slight emphasis on children’s clothing and a selection that might appeal to college students and young couples. (There’s even athletic wear, for those still missing the City Sports that closed in Porter late in 2015.) “It’s probably the No. 1 department.”

The 822 Somerville Ave. small-format store – the nationwide retailer’s sixth in the Boston area, beating a Burlington location opening the same time by virtue of its official store number (3304, whereas Burlington is store No. 3305) – takes up approximately 29,000 square feet in the 54,265-square-foot Porter Square Galleria, filling the most prominent three-quarters of the building facing the red line T stop and bringing a complete redo of the mall’s central atrium and concrete entry plaza.

The remaining slot in the building, a former Potbelly’s sandwich shop that closed in June, should be filled by winter with a non-restaurant tenant that couldn’t yet be revealed, said Breanne Timura, a property manager for building owner CBRE/New England.