‘Aquaman’: Once we’re in the swim of things, there’s too much for newly hip hero to handle 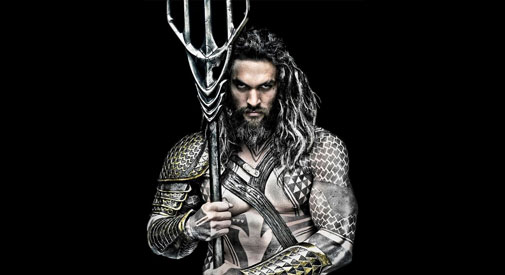 ‘Aquaman’: Once we’re in the swim of things, there’s too much for newly hip hero to handle

On film, DC Comics heroes seem to have heavier backstories than those from the Marvel Universe. You know: Most comes from another planet or an isolated island or underworld and could crush a human with a super burst of flatulence, yet somehow they love us, and there’s deep lore and rules we must be spoon-fed for at least 45 minutes before they ingratiate themselves into our society and ultimately take on the noble task of saving us from certain annihilation. 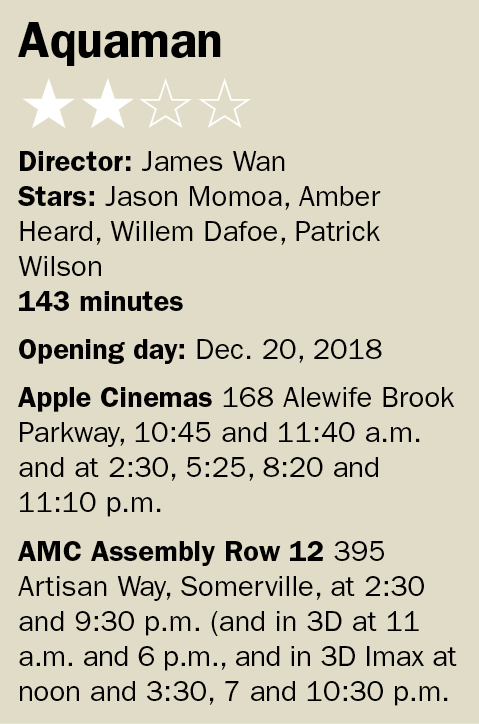 “Aquaman” is no different. Even before the buff surfer dude – Jason Momoa, who looks like The Rock draped in long tresses and with an extra battery of tribal tats – dips his toe in the water, we get a lighthouse caretaker named Tom (Temuera Morrison) toiling away in the chilly northern coast of Maine and one stormy day finding a beauty washed up on the rocks, glistening trident still in her clutch. This fantastic vision, something of a blend of Daryl Hannah in “Splash” and Gal Gadot in “Wonder Woman” is, in fact, Nicole Kidman with a touch of CGI to make her look more in her 20s than her current vintage – not that she needs it. Kidman is Atlanna, the escaped sea warrior daughter of one of the kings of Atlantis. After eating much of Tom’s goldfish Daryl Hannah style, the two become lovers and bear a son: Arthur, who on a class trip to the New England Aquarium is able to summon the biggest shark in the tank to scare the bejesus out of the class bullies.

The film, directed by James Wan – who cut his teeth on the “Saw” and “Fast and Furious” franchises – is a busy, busy affair. Think of it as swimming through an endless school of silvery fish. Atlanna is kidnapped from the rocky coast of Maine, a pirate by the name of Manta (Yahya Abdul-Mateen II) is out to kill the now mature Arthur/Aquaman in a poorly justified blood feud and there’s the seven kingdoms of Atlantis that Arthur’s half-brother King Orm (Patrick Wilson) wants to unite to destroy us land dwellers because of all the plastic and shit we dump in the sea. I can’t say I disagree, and in a neat payback trick he sends wave after wave of plastic bags, bottles and beer rings awash onto our beaches. Willem Dafoe has a role as Aquaman’s avuncular counsel and Amber Heard, toting a shock of Christmas-red hair, gets wedged between the bros as love interest. Dolph Lundgren even lends his square-jawed mug for a few nanoseconds as one of the seven kings.

Since this is an “aqua”-tale, much of it takes place below the ocean’s surface, except those early scenes in Maine and and one later in Sicily where the senseless destruction of ancient relics and structures will make archeologists in the audience reach for a vomit bag. The big undersea finale turns into the kind of wham-bam animated affair we’ve become accustomed to with films such as “Ready Player One” and “Avatar.” The wow factor is gone – it’s a bubbly undersea yawn.

Aquaman traditionalists, yearning for the stiff and square-jawed incarnation from Saturday mornings, are unlikely to be roped in. Momoa, who played the beefy barbarian incarnation Drogo in “Game of Thrones” as well as Conan in an ill-advised “Conan the Barbarian” reboot (2011), plays the part with a hip, feral flair. The character’s never given much of an opportunity to speak before his hands are busied. In shards, we know he has a sense of humor, making a “Fight Club” crack to break the ice with Heard’s undersea princess. The film’s funniest moment comes when our wet superhero walks into a New England biker bar. He can drink like a fish and the scene’s wrap-up is a smart departure, but after that it’s all down the drink.