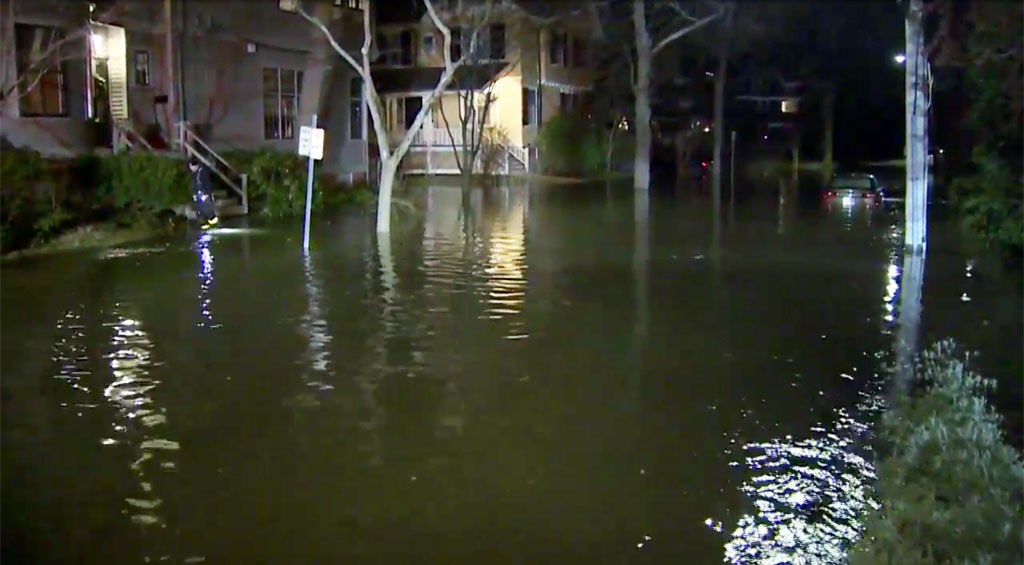 Extreme flooding from a broken water main hit West Cambridge on Dec. 23, as captured by the cameras of WHDH 7 News Boston.

A pipe described as being installed in 1867 and last upgraded in 1954 burst just before 4 a.m. Dec. 23 at Berkeley and Craigie streets, affecting nearby streets as well – “Brattle Street became a river and Mercer Circle a lake,” in Brattle Street resident Elizabeth Houghteling’s description – flooding eight homes and totaling six cars trapped on the street as waters rose waist deep.

For Houghteling, it was a library, guest room and gym ruined, with some repairs to be covered by insurance. For other residents in this West Cambridge neighborhood near Harvard Square – two of whom still hadn’t been able to move back into their homes more than two weeks after the break, according to resident testimony – the damage varies and will have to be paid back completely out of pocket. Roberta Hall, of Mercer Circle, lost 20 paintings representing 30 years of work; her husband lost business servers, while Allison Cook, also of Mercer Circle, saw “over a decade of filed papers of intellectual work gone” and, because she is self-employed, two weeks of business as she handled cleanup and repairs. Her heat and water, out since the flood, returned only Monday. One resident reported the filling of her basement with several feet of brown sludge, and many reported on the expenses they faced from various kinds of damage and fears of mold. 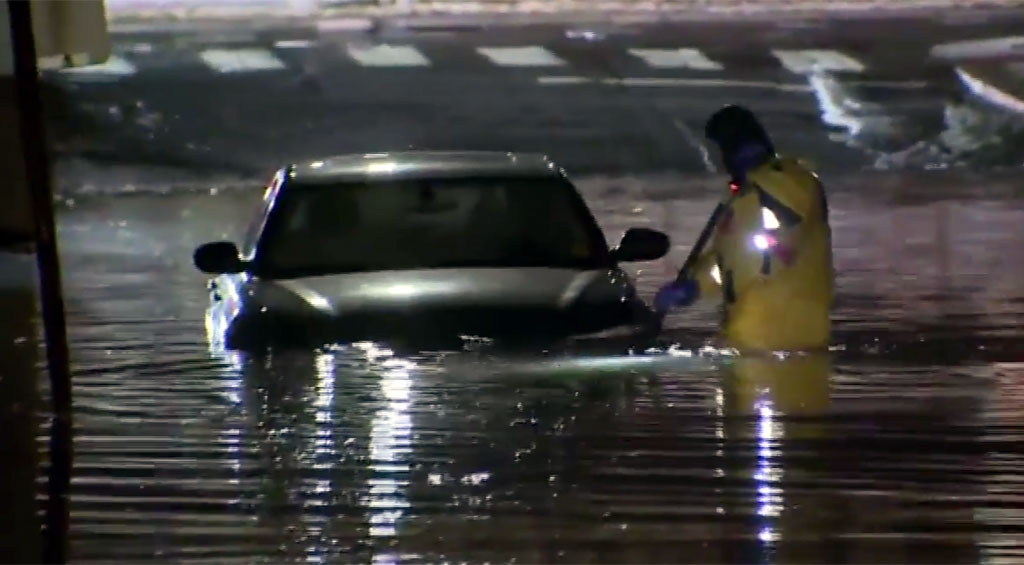 A screen capture from a WHDH 7 News Boston broadcast shows a city worker in a hazmat suit checking out a car trapped during Dec. 23 flooding.

Residents cited the American Water Works Association in putting the average useful life of pipes at around 120 years, with the Craigie pipe now more than three decades past that; resident Ann Porter of Mercer Circle was among those accusing the city of “neglect,” especially considering the regulatory boxes that must be checked for reasons of safety when residents seek to do their own construction. Alan Dworsky, another Mercer Circle resident, said cutting the property taxes of flooded residents by at least half was “the least the city could do” considering there was currently no way for the city to guarantee another water main break wouldn’t take place at any time.

The most common theme of the night was unhappiness over the lack of contact from the city, whether it be early warning for residents to move their cars Dec. 23 before they were trapped and ruined, or an expression of regret or explanation of available services since then.

“I wanted to express, frankly, my amazement at the city of Cambridge. We’ve not heard anything, no email, no knock on the door, no mail, no nothing at all. And that’s quite puzzling to me – if I were to cause damage to anyone of my neighbors, or anyone in the world, frankly I would reach out to them and say I’m sorry, I take responsibility, let me help you make it better,” said Ernst Teunissen of Brattle Street. “Apparently to the city it’s completely normal to not communicate after causing damage.”

Councillor Tim Toomey offered a clue as to why that was, saying later in the meeting that he had a letter from City Solicitor Nancy Glowa “disavowing responsibility” for previous flooding in the Wellington-Harrington neighborhood, which suggested the city wouldn’t make itself more vulnerable to legal claims by stepping forward in a way that suggests apology or fault.

“The legal remedy,” Toomey said of residents who’d expressed hopes for compensation from the city, “I just don’t think it’s going to happen.”

He had himself asked years earlier for a report on the city’s oldest water pipes, he said, but hadn’t seen the information. Councillor Quinton Zondervan, meanwhile, wondered about damage to pipes from the city’s uniquely chloride-heavy water, which has been shown to erode machinery – both the city’s own gear and, as Scout Cambridge’s Reena Karasin reported in November, “for the coffee shops that depend on large volumes of water every day [running through] ruined equipment that their warranties don’t cover.”

The city’s Water Board calls age an inexact proxy for the likelihood of a pipe breaking, Devereux said, but construction or roadwork that involves boring or pile driving could accelerate damage to pipes.

But “leaving aside any of the questions about legal liability,” Devereux said she felt “horrible” about what happened – and then didn’t happen – to the flood victims, and explained along with several other councillors that she hadn’t reached out because the extent of the damage had been unknown to them, possibly because of a breakdown in communications from city staff over the holidays.

“I want to talk about the communication and how we support residents,” Devereux said. “We’ve had a number of serious fires in recent years and there has been a tremendous outpouring to victims. [In this case] I feel like we dropped the ball … I feel badly that city’s response to victims is being criticized in this respect, but we deserve it and we need to think about how we do respond.”

“It was an un-Cambridge-like response,” she said.

Councillor Dennis Carlone agreed that the lack of response from the city added to his dismay over the flooding, calling it “equally as bad [that] no one from the city reached out to these folks … to today, no one reached out.”

Devereux said she was wary of digging into “legal and insurance issues” but did want to talk about the incident at more length. “My intent was not to have a post-mortem [except] on how did we handle the response,” she said.

Devereux’s policy order from Monday notes “at least five other water main breaks recently,” including ones on Pleasant Street, Clay Street, Inman Street, Berkshire Street and Marney Street, and asks for pipe preventive maintenance and replacement plans from the city, and asks the city manager “to consider the possibility of holding an informational meeting with affected community members.”

Messages were left Tuesday with Lee Gianetti, director of communications and community relations for the city. This story will be updated if there is a response.

This story was updated Jan. 8, 2018, to correct that a quote at first attributed to Mayor Marc McGovern was actually spoken by vice mayor Jan Devereux.