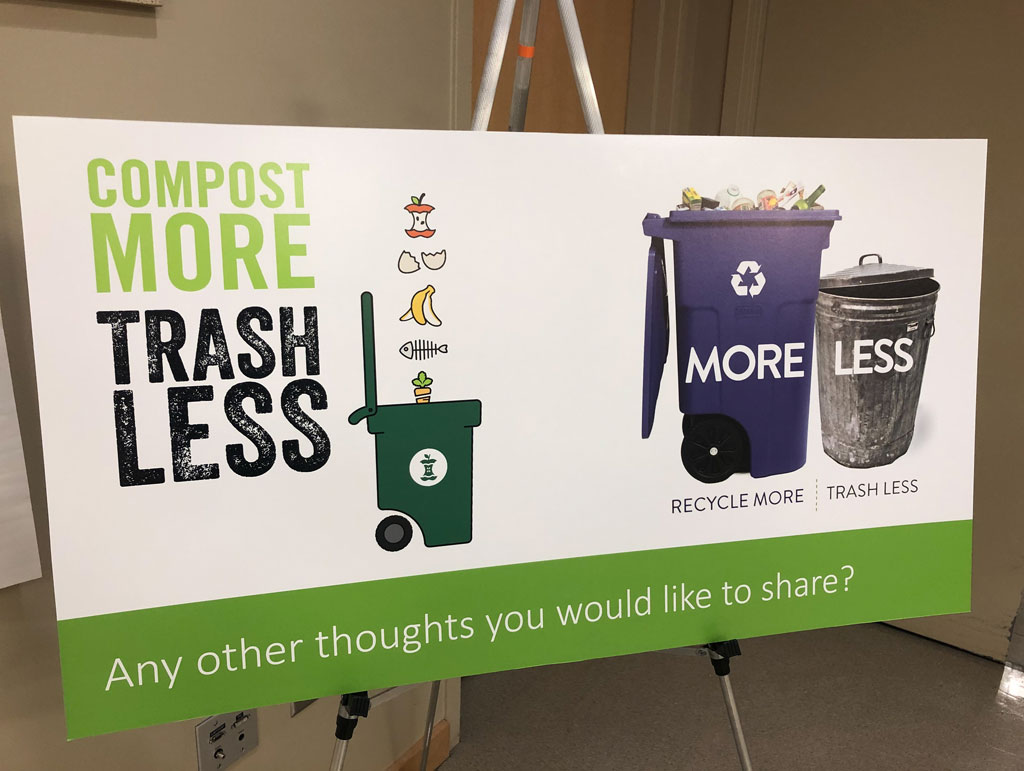 How far does the city plan to go in reducing waste? Down to zero, eventually, but “we must reduce and reuse first,” said Michael Orr, recycling director in the Department of Public Works, at a Dec. 18 public forum about the city’s Zero Waste Master Plan.

To reach what some may see as an optimistic goal of Zero Waste, Cambridge and other cities around the world face a number of challenges, from local participation in recycling programs to unstable global markets for recycled goods.

A complete, roughly 100-page version of Cambridge’s Zero Waste Master Plan is set to be posted online Jan. 31, followed by a 45-day period in which Public Works officials and city planners hope the public will comment on whether the city is headed in the right direction toward its Zero Waste goal: that “all discarded materials are designed to become resources for others to use,” as Orr explained in his presentation. Everything would be reused, recycled, composted or converted to energy. In other words, trash would no longer be burned in incinerators or buried in landfills.

With curbside recycling, composting and yard waste programs, Cambridge is well on the way to reducing waste significantly.

Using 2008 waste levels as a baseline, officials hope to reduce trash by 30 percent by 2020 and by 80 percent by 2050. According to waste audits, a decade ago an average Cambridge household threw away 22.8 pounds of trash per week. In 2017, that was down to 17.3 pounds. If goals are met, average household waste will be reduced to 16 pounds by 2020 and 4 pounds by 2050.  The Bring Your Own Bag ordinance passed in 2016 resulted in a 50 percent to 80 percent reduction of single-use bag consumption.

But city officials, working with consultants, have drafted a number of additional recommendations to consider as part of the master plan created to help Cambridge reduce waste and greenhouse gas emissions, including:

Expanding curbside composting to include buildings with 13 or more units

Reviewing operations of the Recycling Center on Hampshire Street

As the goals and noise of weekly trash trucks still attests, there are still some things to figure out.

For years, China was the chief market for recycled plastics, including plastic collected from Cambridge’s blue toters. In early 2018, citing concerns for its own environment, China banned the import of most plastics, eliminating the world’s biggest market for recyclable material and sending the United States and other countries scrambling to figure out what to do with their waste. Besides creating havoc in the global business of trash disposal, China’s ban was seen by many as a wakeup call to develop and diversify markets.

Some of the China-bound waste was diverted to U.S. landfills. Some was shipped to recycling facilities in other countries at much higher costs. Shipments with high rates of contamination were refused or fined heavily, further increasing costs.

Contamination of curbside recycling has now become a major concern for trash haulers, who have to find a market for the materials they collect. Buyers are increasingly strict about inspections and enforcing standards. Contamination costs the haulers, who in turn pass on those costs to the cities they serve.

A recent audit of blue recycling toters in Cambridge showed that 40 percent of their contents have moderate to major contamination. Common offending materials include bubble wrap, wire hangers, dirty diapers and Styrofoam. Educating residents about what they can and can’t recycle is a key challenge. To confuse matters further, the list of recyclable items changes over time as technology evolves and markets change.

To help address confusion, DPW offers a Zero Waste Cambridge app for Android and iPhone. Users can enter the name of an item and learn how to dispose of it properly. The app also allows users to set weekly reminders for trash pickup days, as well as monthly reminders for street cleaning. A Web version is also available.

Increasing resident participation is another challenge. Cambridge rolled out curbside compost collection to 25,000 households last spring. A survey conducted in the fall with more than 1,300 responses showed a 90 percent approval for services – but the audit found that only 60 percent of households set out their green bins for organics collection.

There’s also the layout of the city itself, which can be difficult for truck drivers collecting trash and recyclables.“There’s a lot of multi-family housing here, with dense narrow streets and lots of on-street parking, so that’s problematic,” said Christine Roarke, a consultant from the firm HDR who helped with the Zero Waste Master Plan and was at the forum in December.

About 30 people attended the forum,  held at the Cambridge Public Library, including Public Works Commissioner Owen O’Riordan, environmental services manager John Fitzgerald and several students fulfilling an assignment for an environmental science class at Cambridge Ridge and Latin School. “It’s interesting to hear about the environment that we as a species are hurting and how we can also help it,” said Claire McNeill, 17. Cambridge resident Alan Lai said he came to see the city’s plans and came away “impressed with what Cambridge does. It’s nice to see all their long-term planning.”

After presentations, attendees were invited to write comments and suggestions on Post-it notes, which revealed advice for such things as: a “plastic straw ban ordinance,” “clothing swaps!” “every-other-week trash collection,” “consistent educational outreach in all schools,” “more fix-it clinics on [a] predictable schedule,” and to “make sure [the Zero Waste] plan covers businesses, not just residents.”

“Changing the mindset of people on waste reduction and reuse is becoming more and more important,” Roarke said. “It’s becoming part of people’s mentality. It will be important to keep that momentum up and keep educating people about the importance of it.”

A complete version of Cambridge’s Zero Waste Master Plan will be posted online Jan. 31 at cambridgema.gov/ZWMP, and Orr, the recycling director, urged people to read and respond. “We want feedback,” he said.

Martha Henry is a member of Cambridge’s Recycling Advisory Committee and writes about refuse and recycling.