Requiring more permits could slow tree loss, but many feel tweak to law is too small a step 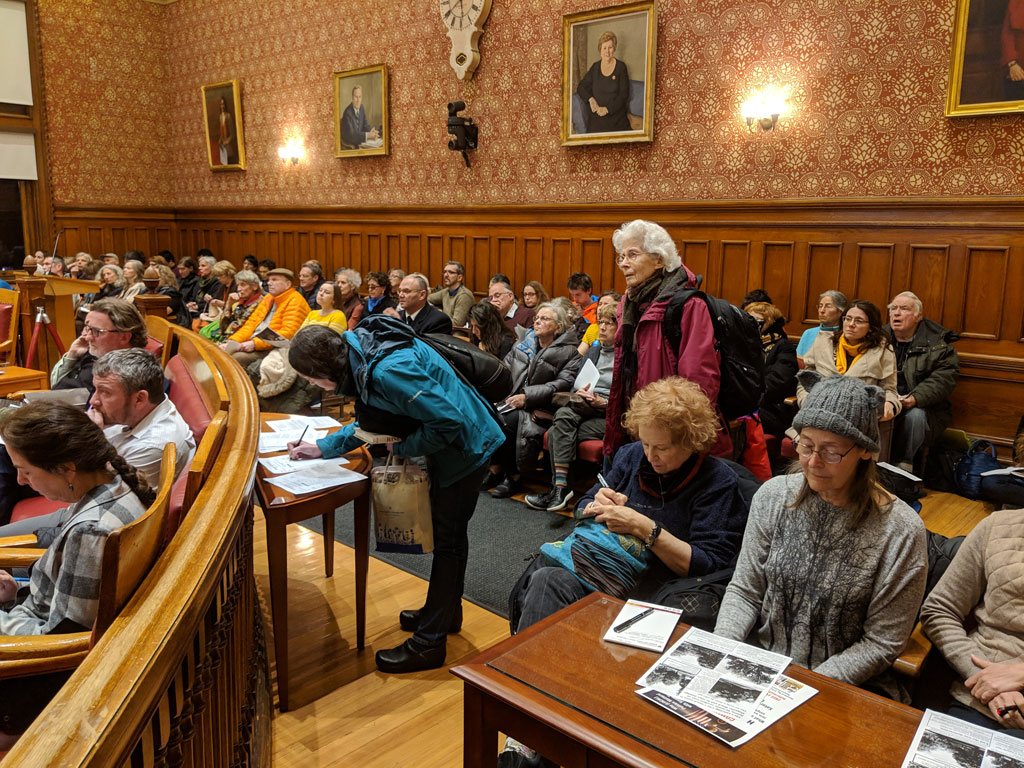 Requiring more permits could slow tree loss, but many feel tweak to law is too small a step

Though a complete moratorium on cutting down trees drew strong support among speakers at a packed Ordinance Committee hearing Wednesday, what the City Council committee members voted on instead was to demand a permit for anyone planning to take down a “significant” tree – those 8 inches or more in diameter when measured 4 feet above the ground.

The idea passed 5-1 among councillors at the hearing and will go to the full council for a vote, which could move it to a second reading and then passage. A tree-cutting moratorium could be added at the final vote for passage of the ordinance. Those in favor saw a need to act despite there being an Urban Forest Master Plan Task Force in place that could have its draft recommendations for tree protections ready for the council to consider as soon as May, with councillors projecting the earliest change to the law in September.

“We’ve already waited. That’s part of the problem, that we started this conversation early in the last term and the urgency wasn’t universally felt,” vice mayor Jan Devereux said. The task force met for the first time 16 months after passage of her policy order Feb. 13, 2017, calling for one.

In public comment, resident Marilyn Wellons reminded the council of the failure to enact a Lighting Ordinance despite a three-year task force.

As many of the 80-plus people among the hearing’s overflow crowd made their way to a lectern to speak, an across the board tree-cutting moratorium was a common suggestion, including from three members of the task force. “We are in a state of emergency,” said Elena Saporta, and fellow member Maggie Booz said she opposed councillor Quinton Zondervan’s amendment only because it was “inadequate and probably ineffective, a kind of minor alarm bell to citizens not inclined to environmental responsibility.”

The city has lost about 18 percent of its tree canopy in the past decade, and the task force has learned that the current rate of tree planting – up to 600 trees annually – and an optimistic tree mortality rate of no more than 5 percent suggests that in a little over a decade Cambridge will still have only about half the trees it has now, already low from the 18 percent loss. It’s a worrisome figure when coupled with the extreme heat waves and flooding bearing down on the city due to climate change.

Factoring in climate change and only “one moderate drought,” the city’s consultants now project that the tree canopy will be reduced by more than 60 percent in the next 11 years.

“We will have more loss, it’s unavoidable,” Zondervan said, yet “planting more trees won’t help if we don’t stop the loss.”

His amendment was needed, he said, because as he sees the current city code, “It’s really great, except unfortunately it doesn’t actually protect any trees.”

The current city tree ordinance, adopted in 2004, covers projects of 25,000 square feet or more and significant trees on a property up to a year before a developer files a special permit to start construction. What Zondervan proposed Wednesday expanded the need for a permit to cover any significant tree now standing – eliminating the possibility that people might cut down all the trees on their property and wait just long enough to file for a special permit to not be held responsible. “The hope is that it would act as deterrent so people wouldn’t preemptively cut down the trees,” Zondervan said. “We would know that because we have satellites that take pictures of the city all the time.”

Projects for 100 percent affordable housing would still be exempt, and so would trees that the city arborist agrees are dangerous and need to be taken down on an emergency basis. But Zondervan said it fixed a problem in the current law: “If I wanted to cut down a more-than-8-inch tree in my backyard, the ordinance is silent on that.”

Councillors discussed the change as a largely “benign” one that would be more about data gathering than punishment, but deputy city solicitor Arthur Goldberg noted that enforcement mechanisms in the existing ordinance would apply, including the halting of construction and fines running into the hundreds of dollars per tree.

Owen O’Riordan, commissioner of the Department of Public Works, was concerned about the burden on staff as well as the details on enforcement and effect on the work of the 18-member task force. “It’s important that the integrity of that be maintained,” he said. The first few months of discussions within the task force “have essentially provided background in terms of the existing urban tree canopy, the extent of loss … and where the loss is most pronounced,” he said, but recommendations had started to take shape that included lowering the definition of a significant tree to 6 inches in diameter from 8 – a change being seen in many other communities – and changing how developers make up for tree destruction. Current law allows them to pay into a fund instead of replant.

The effect on staff would likely not be that great, considering that the bigger the tree, the more likely the owner will go to a professional to do it – and those professionals already come before the city to get permits to block a sidewalk or street with their equipment, Zondervan said. The new permits could be sought by the contractors during the same trip.

Zondervan’s proposal passed, with himself, Devereux, and councillors Dennis Carlone, Alanna Mallon and Sumbul Siddiqui in favor. That overruled Craig Kelley, who ran the committee hearing and wanted to keep the proposal allowing for a moratorium in committee.

“Intuitively, I think it’s a really good idea,” Kelley said. “But I’m not willing to support it right now.”