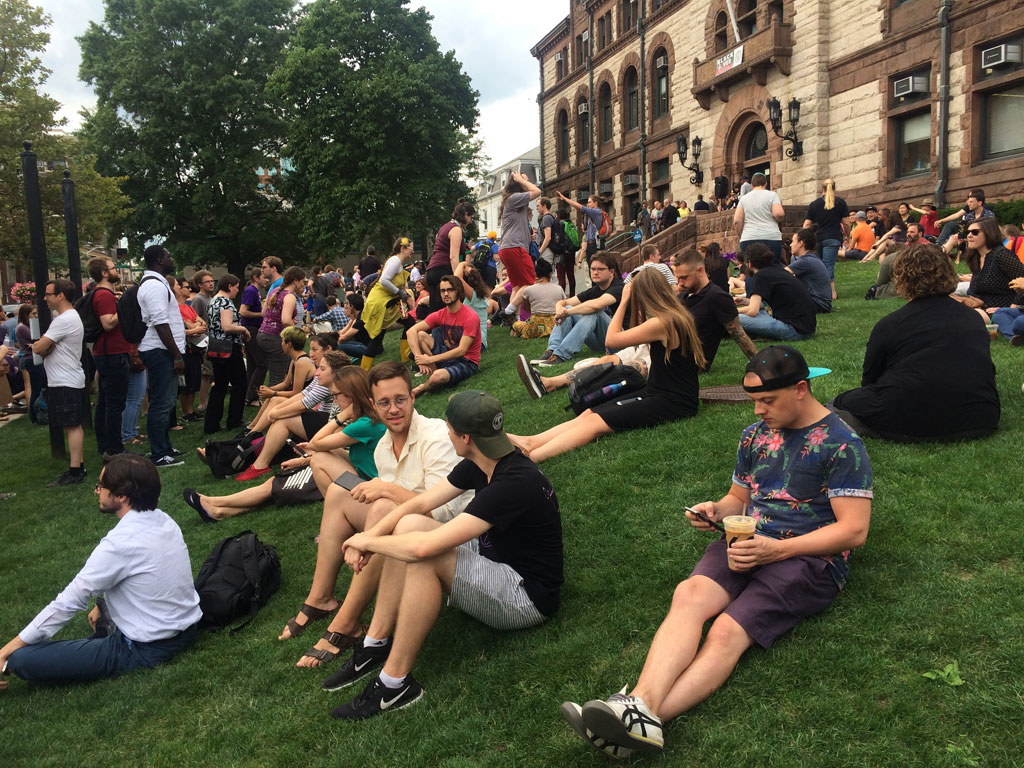 Residents gather on the lawn at City Hall – near where a tree may be planted – for an August 2017 rally. (Photo: Marc Levy)

Environmental projects dominated the results of the year’s participatory budgeting process, with planting 100 additional trees the most popular by far of 20 possible funding priorities chosen by residents – the second year in a row planting trees has been selected by residents as a priority – and arriving just as city councillors also chose to stress the importance of tree planting on their own lawn at City Hall.

The $200,000 request for citywide tree plantings drew 4,011 votes from the 6,849 residents age 12 and older taking part in deciding how to spend $900,000 of the city budget; the next most popular project drew 2,356 votes to put water fountains in every park for $90,000 (which was also essentially a duplicate of an idea funded in the previous participatory budgeting process, as well as hydration stations voted for in 2016 and water bottle refill stations in 2015).

A “Rain Gardens for Resiliency” project that will plant rain- and flood-absorbent bioswales drew 2,159 votes to supplement the city’s nine existing bioswales, and pushed the participatory budgeting money to $925,000 for the cycle, though budgeted money has always expanded to fully fund a year’s most popular projects and the amount set aside has nudged up annually anyway with the number of participants. The annual project began as an experiment in 2015 with $500,000 set aside and a little more than 2,700 residents voting.

Meanwhile, the City Manager’s Office has been slow to act on the loss of trees despite the acknowledged crisis of climate change bearing down on the region. Preliminary results of a study reported in September suggested the city had lost 18 percent of its tree canopy within the past decade. “Today, Cambridge has 25.3 percent of its land area covered by canopy. Cambridge has had an average net loss of 31 acres of canopy cover every year,” the preliminary study summed up. “At this rate, canopy cover will be 16.2 percent in 2030.”

Trees will cool the city during its expanding number of extreme heat days and help handle flooding, which is already a problem in parts of the city and is expected to worsen.

On Monday, city councillors sent on an order to the City Manager’s Office to look into planting “a substantial-sized tree” on the front lawn of City Hall at Inman Street and Massachusetts Avenue. Aerial photos showed an obvious “big gaping hole” that would be “a great place to plant a tree,” said vice mayor Jan Devereux, who initiated the order with councillor Quinton Zondervan. “I do acknowledge that the lot is used for children playing and people sunbathing, but a [newer] tree won’t interfere with that kind of activity – and by the time the tree is large enough to cast a large circle of shade on City Hall lawn, that will be about the time when we will be experiencing a full three months of what we would now call a heat wave, and shade will be very appreciated. Sunbathers can bathe at their own risk elsewhere.”

A buried tank may make the planting of a tree on City Hall lawn impossible, but Zondervan said that if that were the case he would want city staff to find another location “to use this opportunity to make people aware of the extent of the challenge that we’re facing with climate change.”

The year’s priorities also include upgrades for existing trash barrels and recycling containers to keep streets cleaner, prevent pests and make it easier to dispose properly of different kinds of waste, a $100,000 project that was the fifth-most popular and drew 2,253 votes. 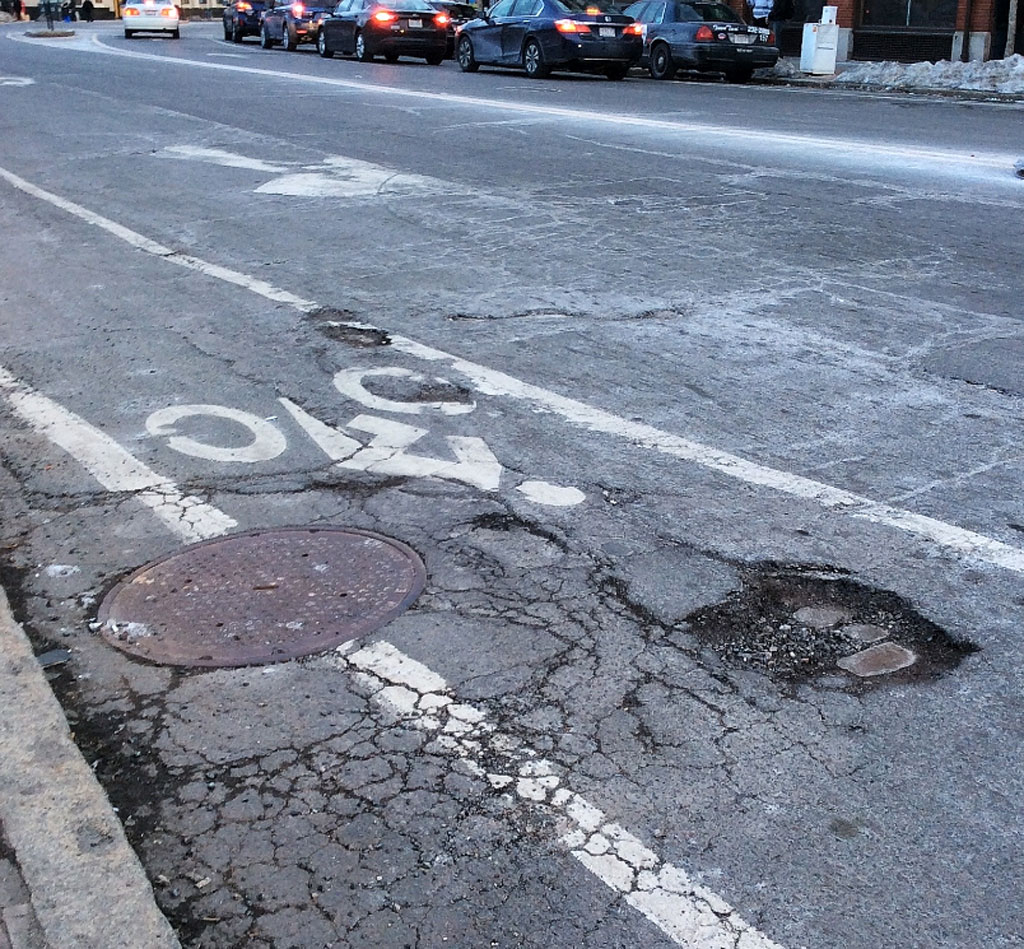 In fourth place was another idea similar to those in previous participatory budgeting processes: a “Smoother Cycling” series of bicycle lane repaving to take care of potholes, cracks and uneven pavement that could cause cyclists to veer farther into streets for their own safety, but potentially into traffic. The $250,000 project drew 2,342 votes and follows three projects from participatory budgeting’s first year: “Make Massachusetts Avenue Safer for Bikers” that adding shared-lane markings for bicycles as well as other signs, “Separate Bike Lanes from Traffic,” as well as a “Shape Up Our Squares” to paint green bike lanes at Massachusetts Avenue intersections in Central and Inman squares.

Last year, during the winnowing of ideas solicited from residents into the proposals seen during voting, the city reportedly rejected bike infrastructure projects despite their popularity because it had “its own process and timeline for installing separated bike lanes. The city wants to evaluate the separated bike lanes that were recently installed before committing to additional separated bike lanes via the PB ballot,” said Alex Meyer, a budget delegate in the process who wrote about his experiences in a piece published on Medium.

The third-place project this year was to “Protect the Health and Safety of our Firefighters” by buying and installing six gear-drying units to shorten wait time for clean gear and adding 11 sets of wireless headsets to protect hearing and improve communication. The combined projects costing $110,000 drew 2,377 votes.

City Manager Louis A. DePasquale said improving the city’s fire stations has been a topic he and acting fire chief Gerard Mahoney had been wrestling with for the past year, but current budget constraints made bigger allocations “close to impossible” to even place in a timeframe.

The six projects will show up in capital funding for the 2020 fiscal year, DePasquale said.

A volunteer outreach committee of more than 25 residents helped collect 1,047 ideas from the public online and in person at community events, according to the city. More than 60 volunteer budget delegates researched and developed the submitted ideas into formal project proposals, meeting with city staff to shape cost estimates and grapple with project feasibility, consolidating the list to come up with final proposals put on a ballot for a week of public voting.

The final 20 concepts voted on are listed here.