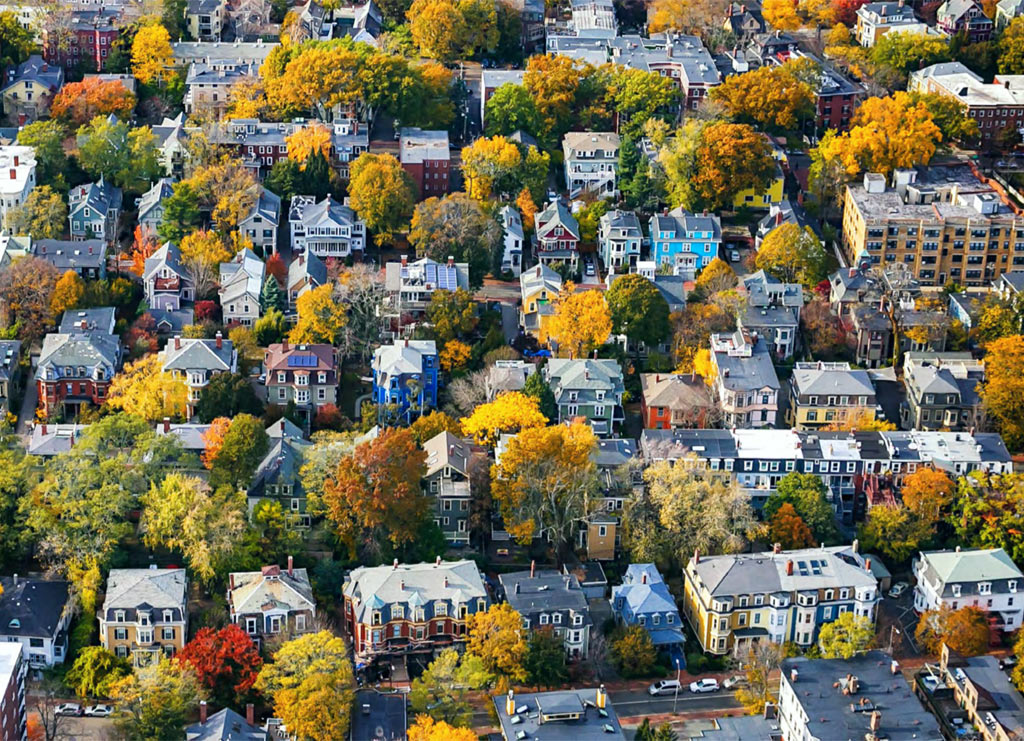 Cambridge foliage is captured on a presentation for the city’s Urban Forest Master Plan Task Force.

Dramatic tree loss has continued since an assessment four years ago, according to city consultants, with 11 percent of Cambridge’s tree canopy lost in that time. That comes on top of a study that found that between 2009 and 2014, the city had lost 8 percent of its tree canopy (previously widely described as a 7 percent loss).

In all, the city appears to have lost 18 percent of its tree canopy in less than a decade.

The information appears in an urban forest master plan presentation dated Thursday, prepared by Cambridge landscape architecture firm Reed Hilderbrand for the city and based on lidar scans – a remote sensing method similar to radar that uses pulsed laser to measure ranges. Until the University of Vermont Spatial Analysis Lab has a chance to review the analysis, the data are considered preliminary and may change, the city says. 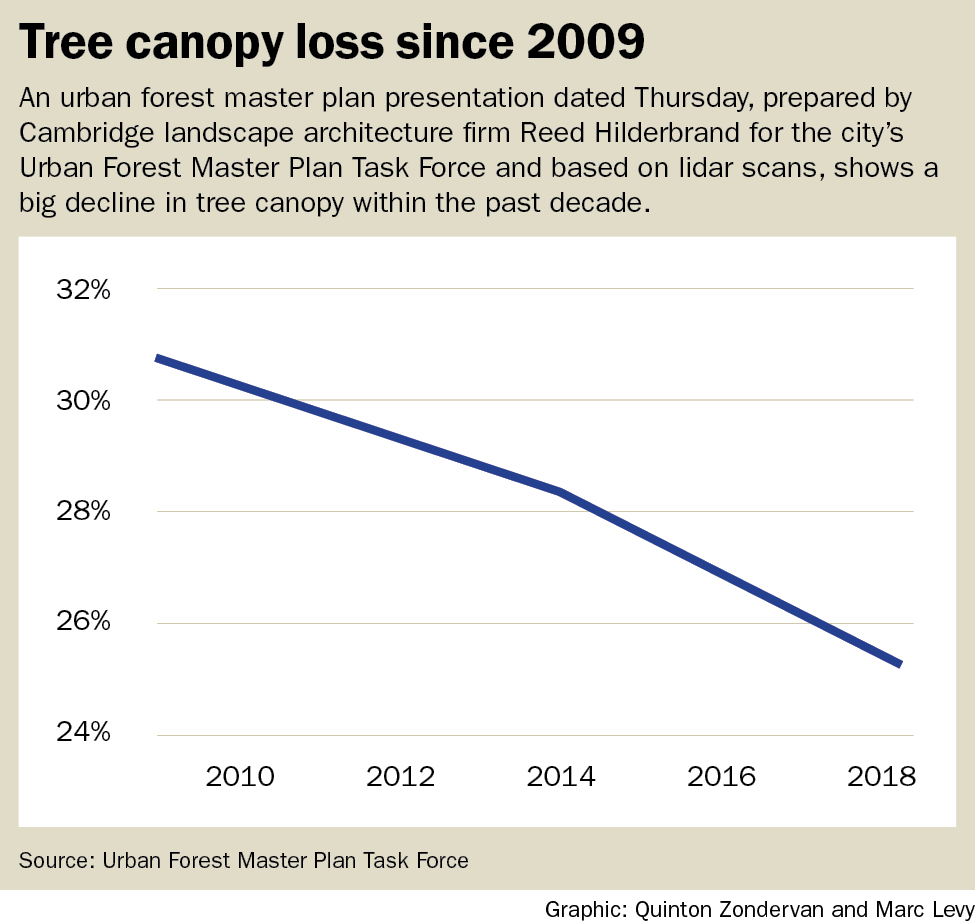 Making up for the loss – replacing 31 acres per year – would require planting 4,300 trees each year, assuming a 3-inch trunk, and making sure they grow for two decades, the report says as a “thought experiment.”

City councillor Quinton Zondervan, a climate activist who served as president of the group Green Cambridge for six years, reviewed the report Saturday.

“This is terrible news and really should inform our policy decisions going forward on where we build,” Zondervan said. “It takes a long time to replace lost tree canopy, and we have many places in the city that would be improved by building on them. Cutting down more trees to plant more buildings, however, makes no sense, especially in light of these numbers.”

Trees will become vital as the worst effects of climate change arrive, scrubbing poisons from the air, cooling neighborhoods on multiplying extreme heat days and absorbing floodwaters. “Trees are too valuable for all of us and too important to our survival, health and safety, to continue destroying our canopy at this pace,” Zondervan said.

The loss of trees from various causes has been a concern for many years; a policy order from city councillors in May 2010 expressed the anger and frustration of residents over watching decades-old, seemingly healthy trees be chopped down with little clear reason or explanation, and that order asked for an accounting back to 2005. “We are losing our mature tree canopy at too fast a rate,” landscaper Carolyn Shipley warned a year into the first five-year study period.

The Urban Forest Master Plan Task Force began meeting in June with the intention of issuing recommendations next summer. Its work stems not only from a council order, but from Zondervan’s work before joining the council: Green Cambridge alerted the city manager in an August 2016 letter of the creation of its own Cambridge Trees Advisory Committee, formed because “our city trees are not doing well,” and asked the city – buttressed by an online petition with more than 100 signatures – to take a similar step. The council filed a policy order for a task force in February 2017, with city staff taking the next 16 months to pull the group together and organize its work.

In the meantime, tree losses have become flashpoint across the city, complicating a plan to remake Inman Square that would cost several mature trees, and outraging residents when already unwanted street work by the utility Eversource accidentally damaged the roots of a large oak tree, forcing its removal. Last week councillors asked the city to undo damage to 55 trees just along Linear Park in North Cambridge.

Another person who saw the data this weekend was Doug Brown, who this summer helped write and introduce zoning that could help Cambridge deal with climate change effects. It failed 4-5 in a council vote.

“Yet more evidence that we are not doing enough to protect our residents from imminent climate impacts, and that existing city efforts are clearly not strong enough to reverse course in a timely manner,” Brown said of the task force data. “In fact, some of the largest losses of the last decade have been associated with city-run projects.”

He cited the Alewife constructed wetland, Huron Village sewer separation project, and the Water Department’s recent work at Tudor and Kingsley parks. “We need to strengthen tree protections ASAP or else in another 10 years we may have very little left to protect,” Brown said.