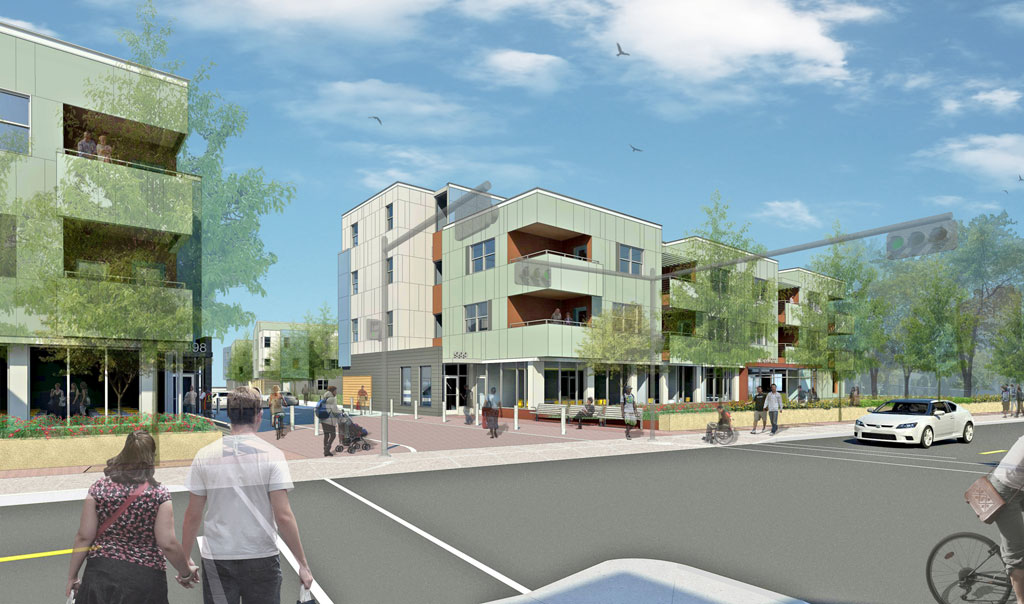 Things got complicated at Jefferson Park housing as an architect’s rendering got turned into reality by the Cambridge Housing Authority. (Image: MassDevelopment)

Pipes under a dilapidated public housing development that was scheduled for replacement were crumbling and contained asbestos that had contaminated surrounding soil – a surprise to planners. Also underground: a large, old and mysterious wooden structure. And a vein of clay that builders hoped would support new buildings turned out to be too watery to use.

These unexpected items in the ground under the Jefferson Park State development in North Cambridge had to be removed, and the work added more than $450,000 to the total cost. Now the brand-new buildings and their 104 modern apartments for low-income tenants are officially complete – and there’s a new bill for even more extras: $1.1 million.

That amount was negotiated by the Cambridge Housing Authority and the general contractor for the project, W. T. Rich Co. The contractor had demanded $3.4 million that it said was the extra cost caused by changes, incomplete and conflicting designs and drawings, and “the volume of change orders” and other requests, according to a memorandum submitted to CHA commissioners at their Jan. 9 meeting.

The authority countered with its own accounting of extra expenses caused by W. T. Rich. In the end, the two sides settled for $1.1 million. By agreeing, the housing authority avoided more extra costs from further delays, as well as what it would have paid to go to court, the memo said.

The $1.1 million, along with previously approved change orders, brings the total cost of the project contract to $53 million, almost $4 million more than originally approved in September 2015. And officials had to tack on another $522,000 for unexpected expenses outside the contract, such as building a traffic signal, paying a telephone “connection fee” of almost $35,000 and installing an electrical transformer for $120,000. The city’s fire department ordered CHA to install equipment that cost an extra $110,000.

Commissioners seemed satisfied with the agreement. “It seems like a good deal to walk away from this,” said Elaine DeRosa, former head of the anti-poverty agency Cambridge Economic Opportunity Committee. Asked by DeRosa whether the dispute with W. T. Rich was “a unique bad experience,” CHA planning and development director Margaret Moran said there were similar problems with rehabilitation of the Lincoln Way development and housing built at the YWCA on Temple Street.

For Jefferson Park State there were even more financial shortfalls – besides the $1.1 million in costs – caused by the approximately nine-month delay in finishing construction. Long after such expenses as digging up the wooden structure (likely an old stormwater drainage structure for a brickworks company), the private companies that invested in the project by buying federal tax credits reduced their contribution by $747,000 because CHA didn’t meet the target date to have all apartments rented, the memo said. And loan interest charges increased $123,000 because of the longer-than-expected construction time. The project was supposed to be complete in September 2017 and wasn’t done until the end of June 2018. Apartments were fully occupied on Sept. 30, 2018.

In the end, the extra costs burned through the project’s contingency fund and the reduced revenue added to the shortfall. The housing agency, which is practiced in finding sources of funding, deferred part of a “developer fee” that was built into the budget, increased the permanent loan for the project and tapped into savings from legal, accounting and other “soft costs” of the project. CHA also used income from increased payments it got from the federal government while the project was being constructed.

Planning and development director Moran acknowledged that some of the money that plugged the gaps might have funded other programs at CHA. Speaking of the negotiations with the contractor that led to the additional $1.1 million in costs, she said: “It never gets as black and white as you want. This is a number that I think we can live with. It keeps our warranty in place.” Despite the conflict with W. T. Rich, “they stayed with the project and they brought it to fruition,” Moran said.