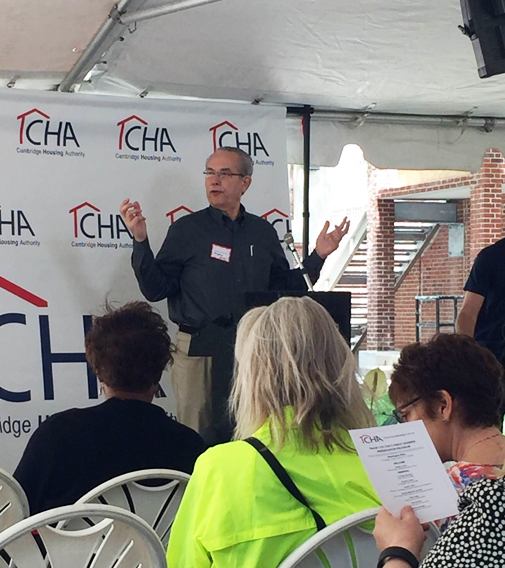 Public housing officials are encountering unpleasant and expensive surprises as they modernize and rebuild hundreds of apartments in a citywide project aiming to preserve low-income housing for decades. In some cases, the unexpected discoveries have exhausted contingency funds, forcing the Cambridge Housing Authority to tap unintended budget sources and risk other projects.

The tiles date back to the 1950s; asbestos was not strictly regulated in the United States until the late 1980s and is still not completely banned. Experts say asbestos-containing floor tiles are not dangerous unless they deteriorate to the point where the material can crumble, and shouldn’t be removed unless damaged – but some commercial cleaning companies warn that even cleaning with coarse scrubbers carries risks.

CHA planning and development director Margaret Moran said the agency inspects apartments annually and checks the condition of the tiles, which are only 2 percent to 3 percent asbestos and carry risks only if sanded. She said she doesn’t know whether tenants were told “specifically” about the tiles, but “it is my understanding that there is no specific notification requirement.”

The authority is removing tiles at Putnam Gardens only because plans call for new flooring, and engineers said they wouldn’t provide a good surface, she said.

Contractors discovered that pipes under the demolished Jefferson Park State complex on Rindge Avenue, being readied for new buildings, also contained the material and had deteriorated to the point of contaminating concrete casings and the surrounding soil. The charge to remove everything: an extra $155,000.

Workers excavating for the basement of a new building there also found a 300-foot wooden trough buried deep – likely an old stormwater drainage structure for a long-closed brickworks company. Removing it cost an extra $50,713.

Planners expected to reuse a vein of “marine clay” under the water table at the same site, but when workers unearthed it, the clay was too wet to support structures. Removal cost an additional $256,900, including the bill for procuring additional material.

Finally, redevelopment work at the Washington Elms development in the Area IV/Port neighborhood uncovered serious deterioration of plumbing in the crawlspace under buildings. The pipes were replaced – for an additional $1.1 million. 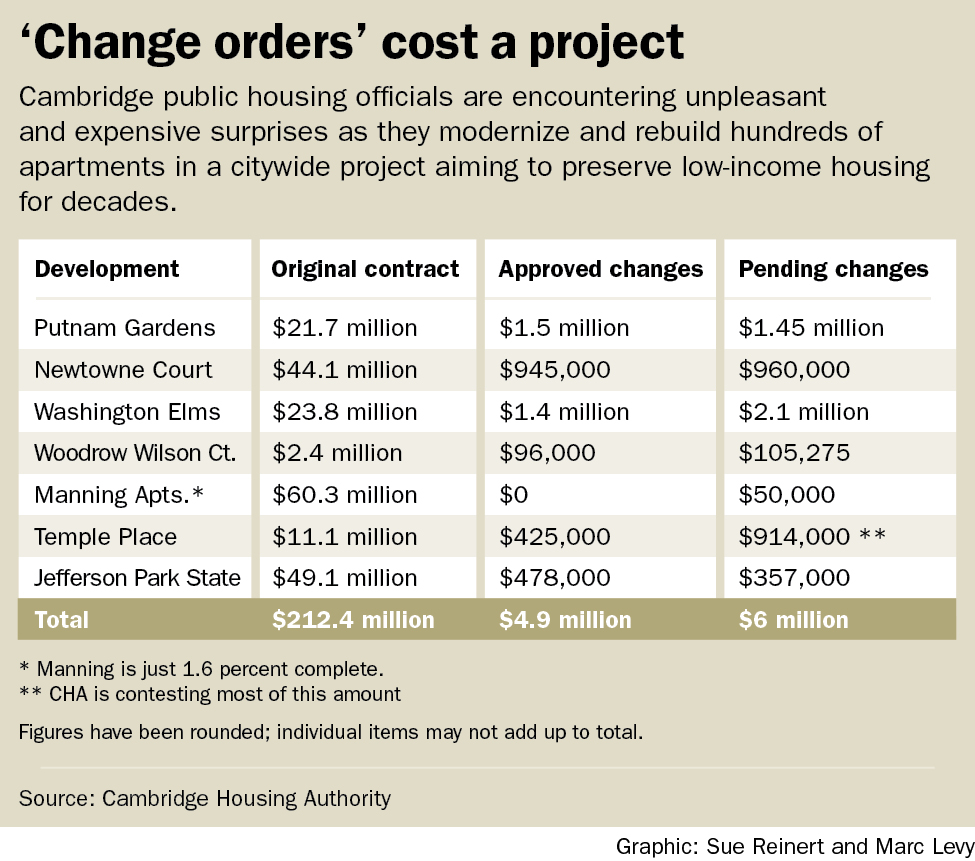 A report to agency commissioners in April listed approved and pending change orders totaling $10.8 million at seven developments (including $914,000 in extras at the new Temple Place apartment building, next to the Cambridge YWCA, that the agency is contesting).

The total amounted to only 5.1 percent of the original contract amount of $212.4 million for all the projects. But the cost of changes at Putnam Gardens and Washington Elms have exceeded the original 10 percent contingency funds included in those projects’ budgets. The authority must tap other sources, including cash from rent and federal subsidies during construction, that would have gone back to the housing agency.

Asked last month whether this could eventually affect other authority programs, Moran said: “We’re very conscious that this has consequences.”

Washington Elms and Putnam Gardens are part of the authority’s Rental Assistance Demonstration program, known as RAD. The program transfers public housing units to private, nonprofit entities controlled by the agency to get private financing necessary to modernize the developments. The authority and many others across the country are turning to the program because support from the federal government has been shrinking for years.

On Thursday, agency officials held a ceremony at Washington Elms marking the completion of financing of the first phase of the program, representing $153 million for five developments that are among the largest and most in need of renovation. Four other developments in Phase 1 were previously renovated under other financing programs. Phase 2, for eight smaller developments, was planned to begin this year. And the revamp of Millers River, the East Cambridge senior complex that is in the worst shape among the city’s public housing complexes, is ready to start under a different federal program. Finally, the agency is replacing Jefferson Park State’s buildings with the aid of the state and an assortment of other funders.

The new Phase 2 projects and Millers River face challenges, agency officials have said. At a hearing held April 12 by the City Council’s Housing Committee, Moran said the agency may face increased competition from other affordable-housing developers for federal low-income housing tax credits. These credits, sold to private investors, are a key element of financing for Millers River and the Phase 2 projects.

A related problem involves restrictions on the amount of federal tax-exempt bonds available to be distributed by state development agencies. These bonds, another part of the financing package for RAD projects, also entitle developers to the tax credits.

In January, financing for the modernization of almost 200 units at Manning Apartments in Central Square almost fell through because the Massachusetts Development Finance Agency didn’t approve tax-exempt bonds for the project that had been in the works since 2014. The reason: MassDevelopment’s bonding authority had unexpectedly been cut almost in half for this year, officials said. CHA rejiggered its financing schedule so it could reduce its bonding request and save the project.

Officials have said the improving economy means more competition for the bonds at the same time there is less bonding authority left over from previous years to roll over into the current year’s cap. And the huge scope of the Cambridge program would claim much of MassDevelopment’s total capacity, leaving relatively little for other housing developers.

“Our ability to do all [of the remaining projects] will be impacted” if there are restrictions on bonds and their related tax credits, Moran said at the committee hearing.