Animal Commission steps in to amplify neighbor message: Pick up after your dog 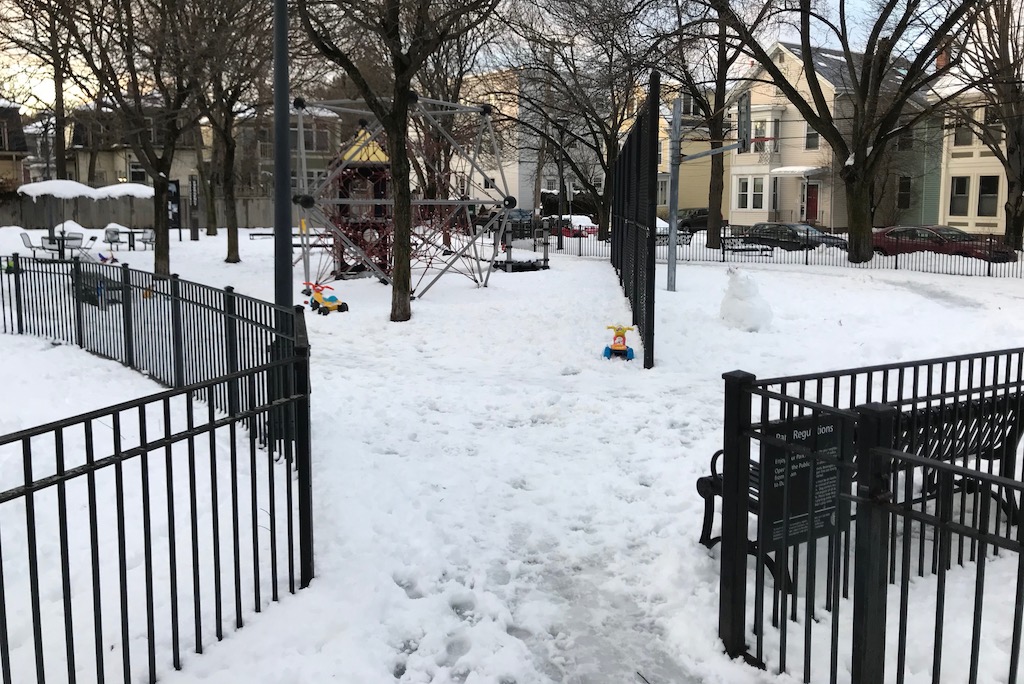 Animal Commission steps in to amplify neighbor message: Pick up after your dog

Dogs are sometimes off leash and not cleaned up after at Paine Park on Amory Street near Inman Square, seen Monday after snowfall. (Photo: Marc Levy)

Sidewalks in neighborhoods around Inman Square have been littered with dog feces for years, with Amory Street in Mid-Cambridge being among the most hazardous stretches. Avoiding fresh piles of droppings can seem like winding through a minefield, while month-old waste can be seen hardened and dried or lurk invisibly under winter snow, waiting for a thaw to stick on your soles.

It’s been bad enough that residents posted signs last year asking dog owners to clean up after their animals. The city has taken notice, and city workers posted fliers in February on trees and poles up and down the street: “City ordinance states that dog waste must be removed from the public way. Fines start at $100.”

This is a steep jump from the $10 fine for first-time offenders imposed until October 2015, but it remains to be seen how effective the warning will be and to what extent the fines are enforced. 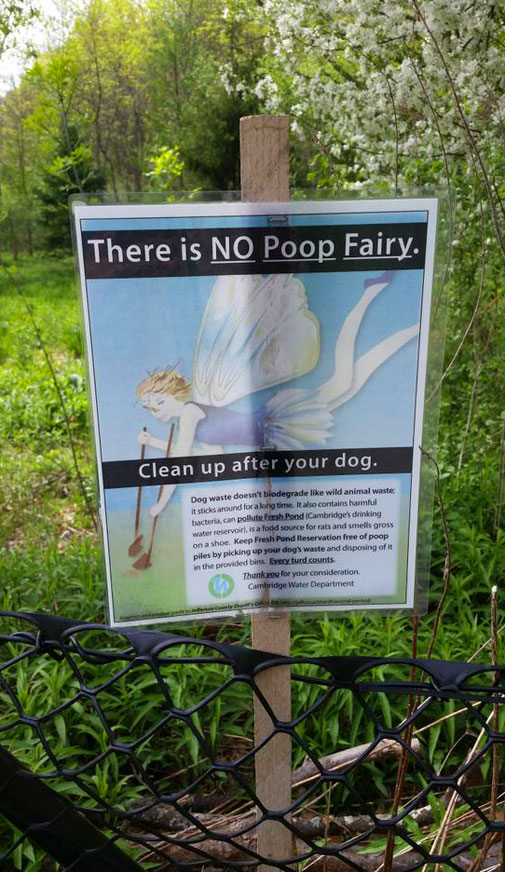 The Water Department had to remind dog owners in 2015 to pick up after their pets near the city’s watershed. (Photo: Cambridge Canine)

“It is a difficult regulation to enforce,” acknowledged Mark McCabe, director of the Animal Commission. “We would have to witness the person letting their dog defecate and not picking up after the dog.”

“These offenders are usually dog owners who use the cover of darkness at night to let their dogs relieve themselves and then not pick up – or very early in the morning, before working hours,” McCabe said. “The waste is probably from a small group of repeat offenders.”

Dogs are often let off leash to run free at Paine Park, in violation of posted regulations, frequently defecating where children play. “In a small area such as Paine Park it does not take many dogs to create a very unhealthy situation. Dogs usually relieve themselves at least twice a day, and five dogs in one day would create 10 stools – over a seven-day week you end up with 70. I apologize for the stool math,” McCabe said, “but it illustrates how a small population of irresponsible owners can create unhealthy conditions.”

Five years ago, the City Manager’s Office reported concerns from dog waste left by the city watershed at Fresh Pond, when the Water Department posted its own signs to remind owners to pick up after their pets. The message of those signs was that there was “no poop fairy.”

Anonymous reports of improperly handled dog business anywhere in the city can be made to the Animal Commission, which will at least alert the offender to the fact that the city, and the community, are taking notice.