Protesters press Harvard on #MeToo issues, citing surge in complaints made in past year (updated) 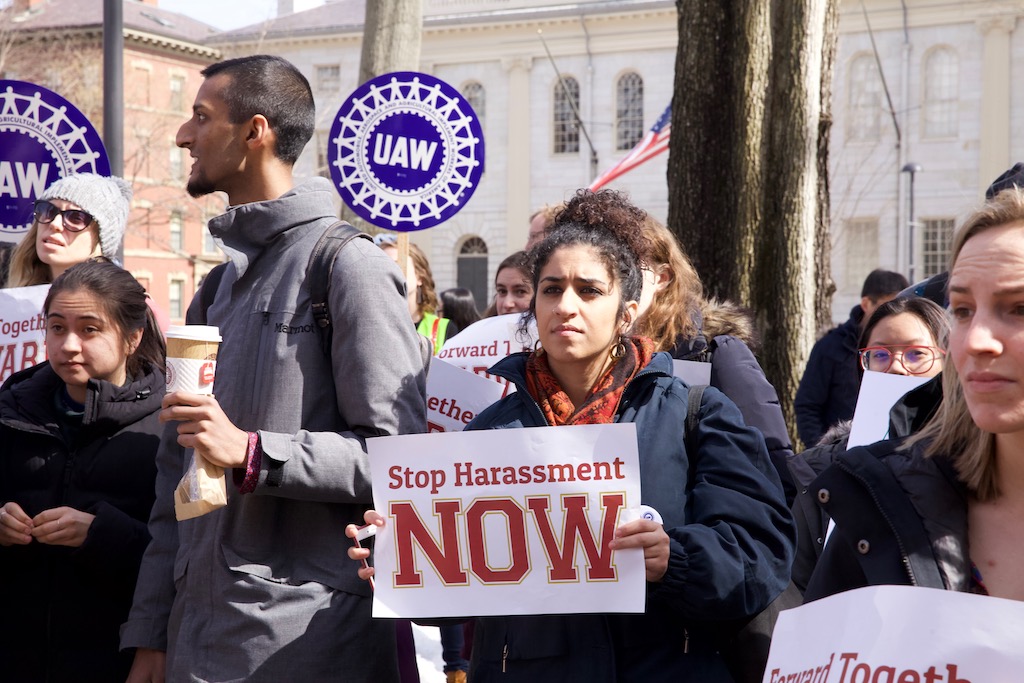 Protesters press Harvard on #MeToo issues, citing surge in complaints made in past year (updated)

Student workers and other protesters said Harvard chose to protect high-profile professors accused of harassment such as Roland Fryer and Jorge Dominguez while complaints of sexual and gender-based harassment counted in 2018 rose 55 percent from the previous year, to 416 from 266, and and formal complaints were up 7 percent, to 46 from 43 – and more dramatically from the 26 reported in the previous two years.

“Harvard University has a world-class reputation and a world-class #MeToo problem,” said Cherrie Bucknor, a second-year graduate student in sociology. “Harvard needs to change its culture and stand up for women, people of color, LGBTQ people and all those impacted by discrimination and harassment. Not one by one, after we’ve been silenced and our careers have been sidetracked.”

A union contract with guaranteed provisions would ensure that reports of harassment are “heard, protected and supported,” Bucknor said.

But the grievance and arbitration process proposed by the workers would skip over a process that Harvard said Wednesday “is in place to ensure thoroughness, fair play and due process for the complainant and respondent alike.” An independent arbitrator would have no legal power to issue sanctions or punishment on an offender, the university said through a representative, and would put complainants, the accused and witnesses in a single room in a way the university “does not believe is appropriate for these important, complex and sensitive issues.”

Graduate and undergraduate workers voted 1,931 to 1,523 in April in favor of forming a Harvard Graduate Students Union, but the university hasn’t reached agreement over key provisions. The HGSU, of which Bucknor is bargaining committee member, said more than 2,000 signed a petition calling on Bacow to commit more time to negotiating and support workers and reporters of harassment and discrimination.

Harvard disagrees with the premise.

“Negotiations have not stalled. They are active and ongoing. Since October, there has been and continues to be an exchange of proposals and counterproposals,” said Jonathan Swain, of Harvard Public Affairs and Communications. “Many of the items being negotiated by HGSU-UAW and the university are complex and take time to be vetted, including outside of bargaining meetings, in order for the University to respond appropriately – something we know our HGSU-UAW colleagues appreciate, as they spent five months creating and putting forward their economic proposals.”

The last union proposal was received Feb. 22, Swain said, and didn’t respond to proposals the university put forward in October and November.

The Wednesday rally on the Science Center Plaza included student workers, campus allies and labor leaders; many elected officials were traveling this week to the annual conference of the National League of Cities in Washington, D.C., but union officials said city councillors E. Denise Simmons and Sumbul Siddiqui had agreed to attend.

Participants walked to the university’s Massachusetts Hall, where they delivered petitions to Bacow outside his office. “It was nice of him to come out, but he said the same thing we’ve been hearing for years,” Bucknor said. “It’s not enough. You can’t just claim to support survivors – you have to act like it. We won’t stop until we have these protections in our contract.”

This post took significant amounts of material from a press release. It was updated March 13, 2019, with comments from Harvard and a corrected account of April voting about forming a Harvard Graduate Students Union.