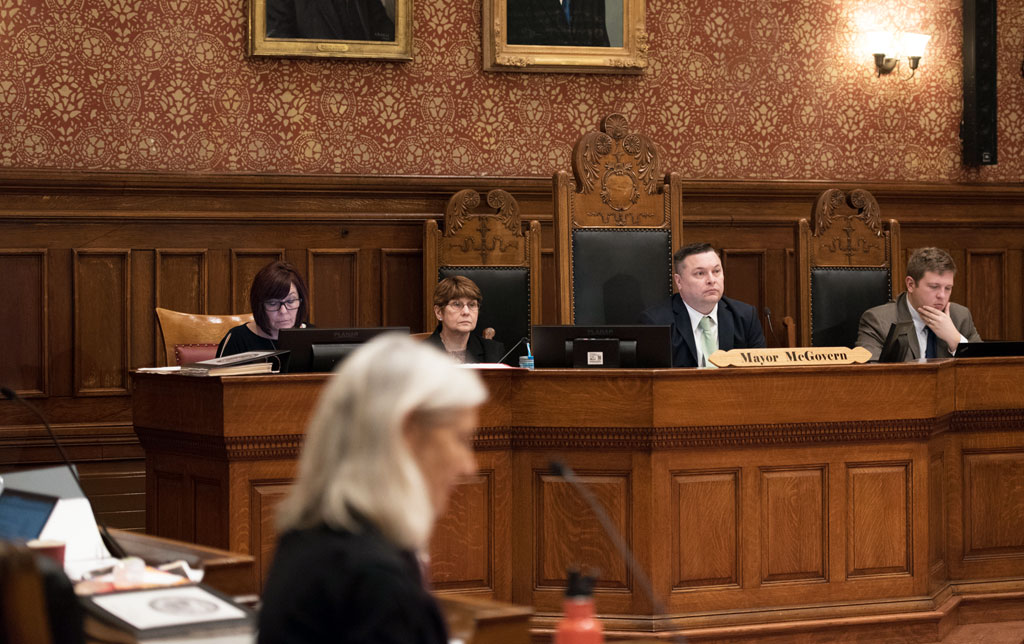 The first sales of recreational marijuana in Cambridge will be delayed even longer than expected because the city’s Law Department is saying it wasn’t told formally to answer questions that emerged from a City Council hearing.

Mayor Marc McGovern signaled impatience and “disappointment” with the Law Department on Monday, saying he had reviewed the video from an April 11 hearing held by the council’s Ordinance Committee and found it clear that city solicitors were expected to start work answering several lingering questions.

“If there’s a miscommunication in the solicitor’s office about whether or not a motion is needed, they need to clean that up with their staff,” McGovern said. “We would have filed a motion and passed it and we may have had those answers to those questions in front of us, and maybe we’d be having a different conversation tonight.”

Instead of working with answers from April 11 and potentially passing a law, councillors passed a formal order Monday calling for answers to the more than 20 questions arising from the hearing.

A series of possible amendments to the law responding to those questions was introduced by councillor Quinton Zondervan, but they were merely referred for discussion by a council that felt it didn’t even have enough information to go into them in depth.

“We’re sort of in a weird place where there’s this new law that no one quite understands perfectly. well, anywhere. And we have a lot of ideas of how it should take place in Cambridge or might take place in Cambridge – but absent guidance from the Law Department, we’re sort of stuck in what we can and can’t do,” said councillor Craig Kelley, who wrote a memo and the formal order with questions resulting from the April 11 hearing.

When the answers come back, another Ordinance Committee hearing will be scheduled, he said.

McGovern urged the Law Department to act “with all due diligence … so that we can move this along.”

After a statewide ballot initiative in November 2016 in which 69 percent of Cambridge voters signaled approval of recreational marijuana businesses, sales were allowed officially starting in July 2018. But more than nine months later, Cambridge has yet to pass its own laws allowing adult-use cannabis shops. With some humor, councillors thought the law might be enacted around April 20 – that is, 4/20, National Weed Day and a universal code for marijuana.

It became clear, even as nine potential sellers lined up for community meetings to take place in late April and early May, that the deadline would be missed because there were still issues to be hashed out. The key sticking point for councillors was ensuring that the benefits of the new pot industry go to small-business owners, not giant conglomerates. They wanted priority to open shops for Cambridge residents, especially those in low-income areas, and social equity and economic empowerment applicants – basically, people of color who were targeted disproportionately by police and courts during the war on drugs.

The first version of the law said the first two years of recreational marijuana sales in Cambridge would allow businesses to be opened by those economic empowerment applicants, following certain rules, and by existing medical marijuana dispensaries (of which Cambridge has six allowed, with three already open). Councillors including Zondervan, Sumbul Siddiqui and Dennis Carlone and vice mayor Jan Devereux want to explore giving priority to economic empowerment applicants for at least five years.

Some applicants ready to go

Among the nine applicants are two who grew up in Cambridge, are economic empowerment applicants and are ready to go, including having spaces to sell in, McGovern said, but even they can’t move forward.

There are several pot shops open statewide, with the closest being one that opened March 23 in Brookline. In Cambridge, even after a law is enacted, sellers will have approval processes to go through in addition to the usual challenges of opening a business, which will likely make for several months before a shop opens to serve the voters who approved them.

“At one point [Deputy City Solicitor Arthur] Goldberg asked if we needed a motion to get these questions answered. I said, ‘So moved,’” McGovern recalled of procedural discussions at the April 11 hearing that ended with this: “What Mr. Goldberg said was that it was the sense of the committee ‘that you want us to start working on these questions,’ and we said yes.”

The minutes of the hearing confirm McGovern’s memories and review of the tape, saying that Goldberg “stated that if the City Council wanted a more definite answer, the Law Department will get back to the City Council on this.”