Bike lanes to be added by Museum of Science, where bicyclist hit by truck died in November 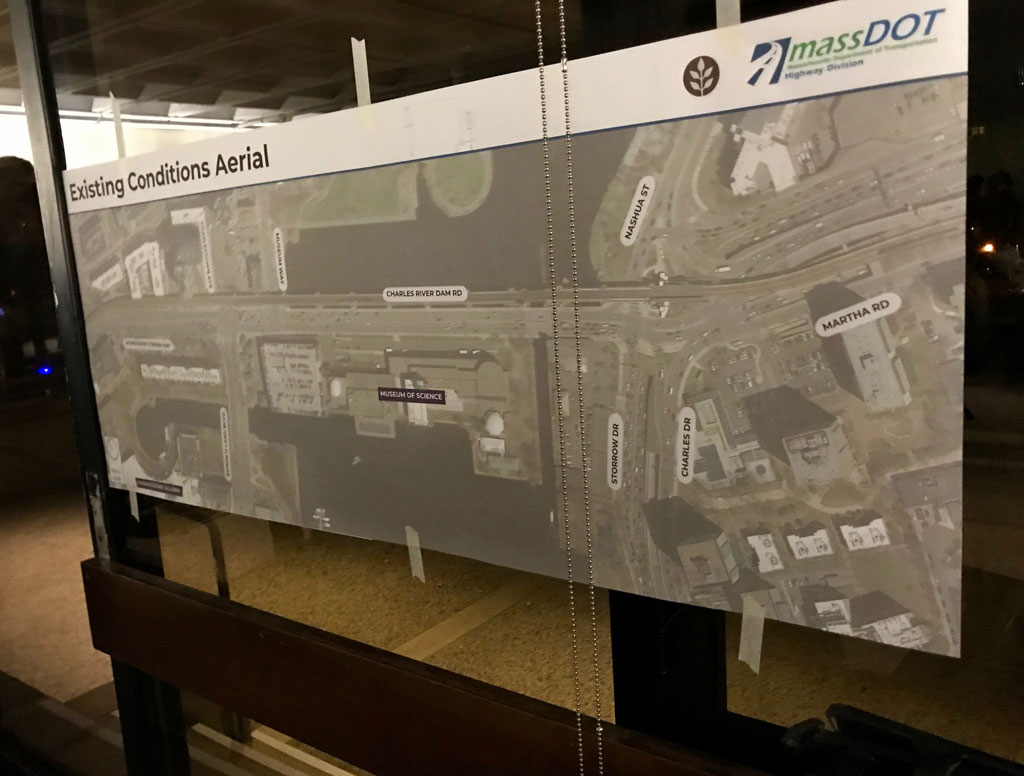 Bike lanes to be added by Museum of Science, where bicyclist hit by truck died in November

State transportation officials presented issues about road improvements near the Museum of Science and gathered citizen suggestions at a Dec. 18 meeting held at the Massachusetts Institute of Technology. (Photo: Marc Levy)

Crews will begin work in June to reconfigure the Charles River Dam Road near the Museum of Science to make two car travel lanes in each direction, a protected bike lane in each direction and a dedicated turn lane onto Land Boulevard, state Department of Transportation officials said Wednesday.

Bicyclist and Boston University grad student Meng Jin, 24, was struck and killed Nov. 9 by a dump truck at Museum Way and Monsignor O’Brien Highway, leading to widespread calls for improvements there.

It’s currently a six-lane stretch of highway that many have called confusing and dangerous, especially with a large number of trucks swelled with construction nearby and use by Duck Boats accessing the Charles River.

Charles River Dam Road and Craigie Bridge will also get enhanced pavement markings, wayfinding signs and traffic signals for bicycles and vehicles. The work will be timed for minimal impact at peak travel hours, officials said. The work is expected to be completed by August.

“We are very pleased that MassDOT listened to the concerns of advocates and bicyclists and found a way to widen and add flex posts along a majority of the new bike lanes on the Craigie Dam Bridge Road, as well as bicycle signals at key intersections to prevent conflicts at turns,” said Becca Wolfson, executive director of the Boston Cyclists Union, in a press release. “What we appreciate most is a second instance – similar to the Longfellow Bridge bike facility design – when MassDOT showed leadership in revisiting an old plan that met outdated safety goals to update it to reflect their current priorities, bike facility demand and best practices as far as physical separation is concerned.”

In the five years beginning July 1, 2018, the state expects to spend more than $7.6 billion on roadway and bridge construction projects, officials said. It coincides with Cambridge’s renewed focus on transportation safety through infrastructure, with the City Council approving a Cycling Safety Ordinance last month that requires the city to add separated or protected bicycle infrastructure during construction of key routes, and a new look at the Cambridge Bicycle Plan.

Joseph Barr, director of the city’s Traffic, Parking &Transportation Department, said the improvements to the road – also known as Monsignor O’Brien Highway and state Route 28 – were “a great example of MassDOT collaborating with municipalities, community members and advocates to improve safety on state-owned roads.”