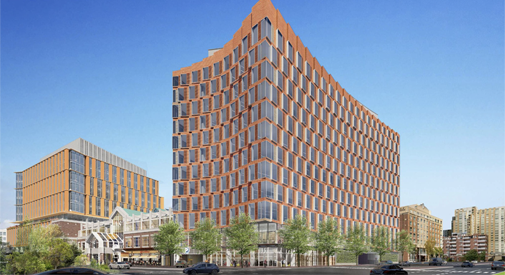 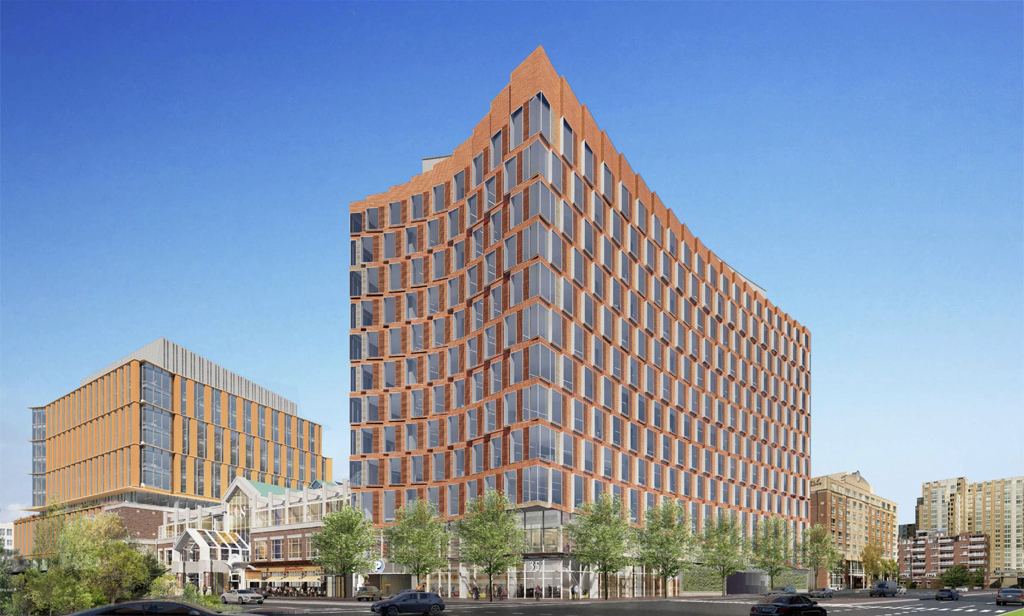 A proposed revamp of CambridgeSide mall properties would include a variety of uses and architectural styles. (Image: Elkus Manfredi)

New England Development is petitioning the city to rezone the CambridgeSide mall area. Through initiatives that include building 10- and 12-story buildings that are 118 percent higher than current zoning regulations, the developer plans to increase square footage by more than 100 percent (to around 1.7 million square feet). Retail space will be scaled back, and the vast majority of the site will be devoted to ultra-lucrative office and lab space.

This initiative should be rejected – there is no financial justification for the requested building heights, and it will result in significant costs for all Cambridge residents.

The company’s primary argument for rezoning is to save the mall from the pain e-commerce has inflicted on bricks-and-mortar retailers. “Survival is a must for us,” said Stephen Karp, the developer’s chairman and chief executive.

We all understand that stores are suffering – with a market cap approaching $1 trillion, Amazon has disrupted the retail industry. I’m pro-business and want the mall area to thrive. That said, the questions every Cambridge citizen should be asking are: Why it is necessary to increase building heights by 118 percent to save the mall? Why can’t it be saved within current zoning code?

How much is enough to “survive”? 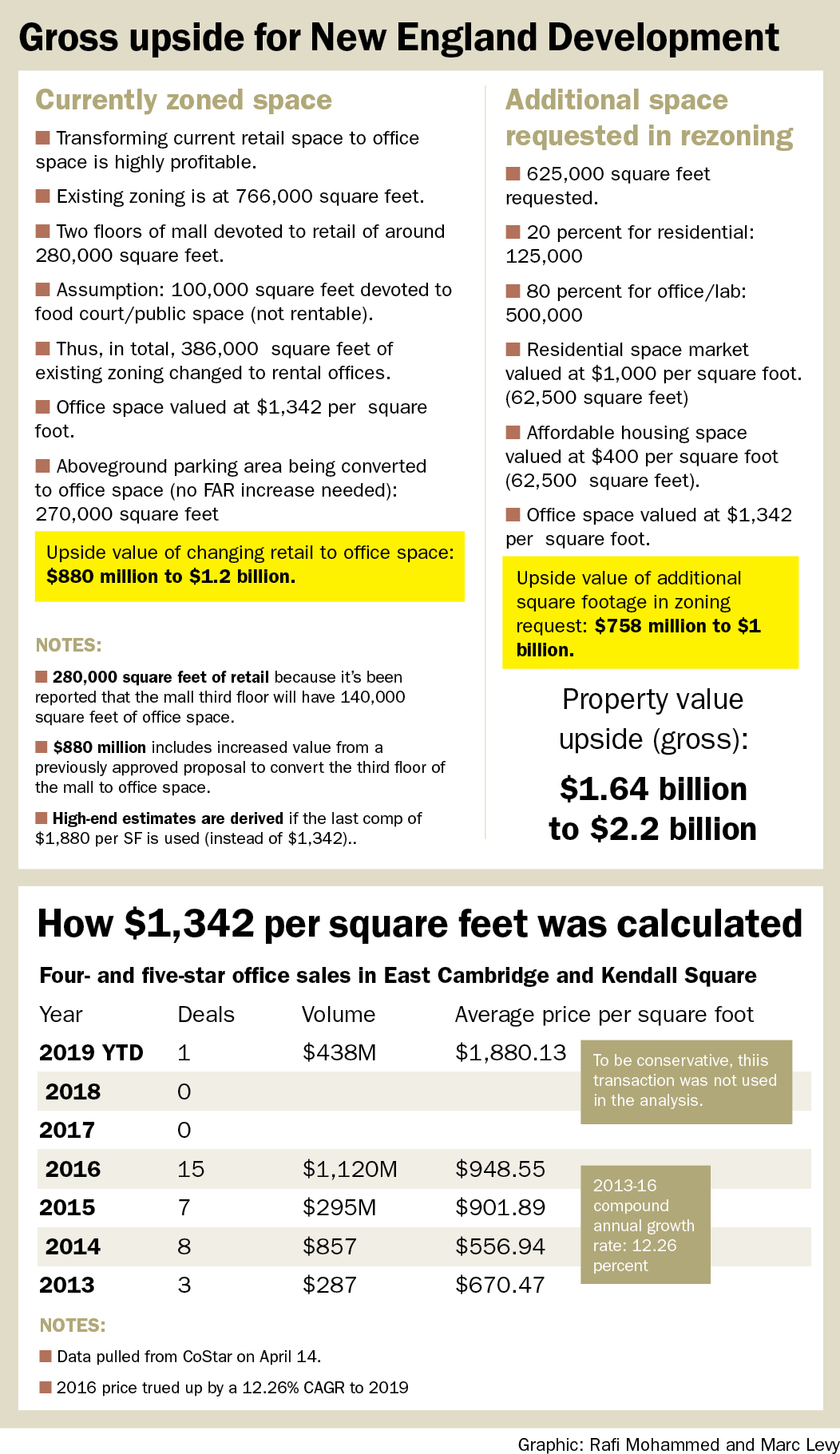 The above ballpark analyses are meant to start a conversation. The estimates represent the upside in value and do not account for costs, and I used publicly available data and strived to be conservative in my assumptions. New England Development is welcome to provide cost data to determine its total profit; I’m open to feedback and will revise my estimates accordingly. Transparency and conducting fair analyses are paramount to me.

Now let’s turn to the downsides to residents. Key costs include increased traffic, noise (labs are notorious for unreasonable noise), light and other pollution, enhanced shadows from tall buildings, heightened potential for the infrastructure to fail (e.g., Eversource reports that electricity demand reached 98 percent of all-time peak in Cambridge last summer) and, very importantly, how adding a 10- and 12-story office buildings will alter a historical neighborhood with architectural significance.

While the full effects of many of the above downsides are truly felt only if you live next door, don’t discount them – your neighborhood could be next if this zoning precedent is set. Even if a 12-story office building isn’t located next to your family’s home, this growth can significantly affect you. Imagine if you lived on Fulkerson Street and discovered that Eversource is planning to build a large electric substation across the street from an elementary school because it’s running out of energy. What if you lived on Gore Street and one day woke up to learn you’ll be facing a year or more of construction and torn-up asphalt because the Cambridge Crossing sewage system needs to be expanded? How would you feel if an electrical blackout occurred and your loved one is unable to get medical attention due to snarled traffic? 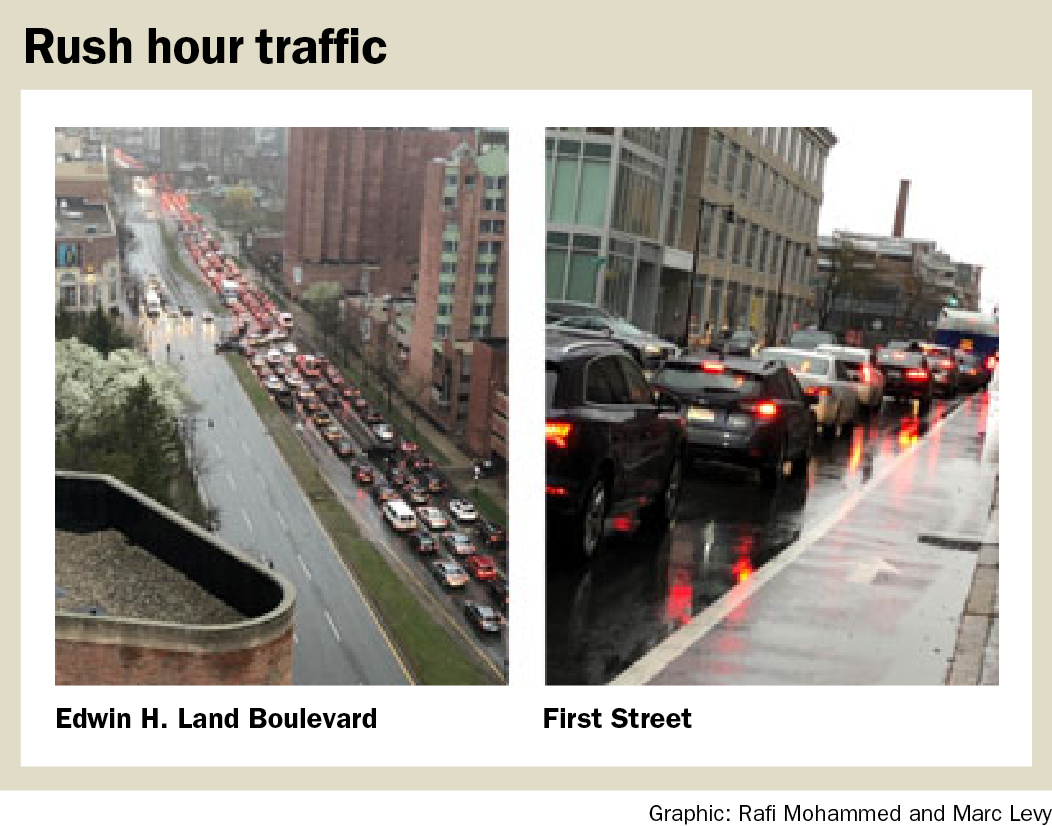 A blisteringly hot office market shouldn’t be viewed as a tax dollar bonanza by the City Council, though, interestingly, most of the extra tax revenue is returned to taxpayers. Since 2010, the residential property exemption has increased by 89 percent and the residential tax rate has decreased by 23 percent. In a debatable move, our commercial tax rate has decreased by 27 percent during that same period.  Cambridge’s current commercial property tax rate is a bargain (45 percent cheaper) compared with Boston’s. According to data from The Tax Foundation, Cambridge’s effective tax rate on its median home value (0.32 percent) is peanuts compared with taxes in other states. For clarity, I am not advocating increasing property taxes. My point is that Cambridge is in a healthy financial position where it can consider fully the costs of upzoning to the community.

New England Development has recently mentioned the possibility of designating 50 percent of its residential building for low-income and affordable housing. Fifty percent is a generous offer if the development were only residential. But keep in mind, housing accounts for less than a tenth of this development – the real money is in the office and lab space. I estimate that this 50 percent offer will cost New England Development roughly $1.1 million annually, which is trivial given the gross potential project upside of up to $2.2 billion. 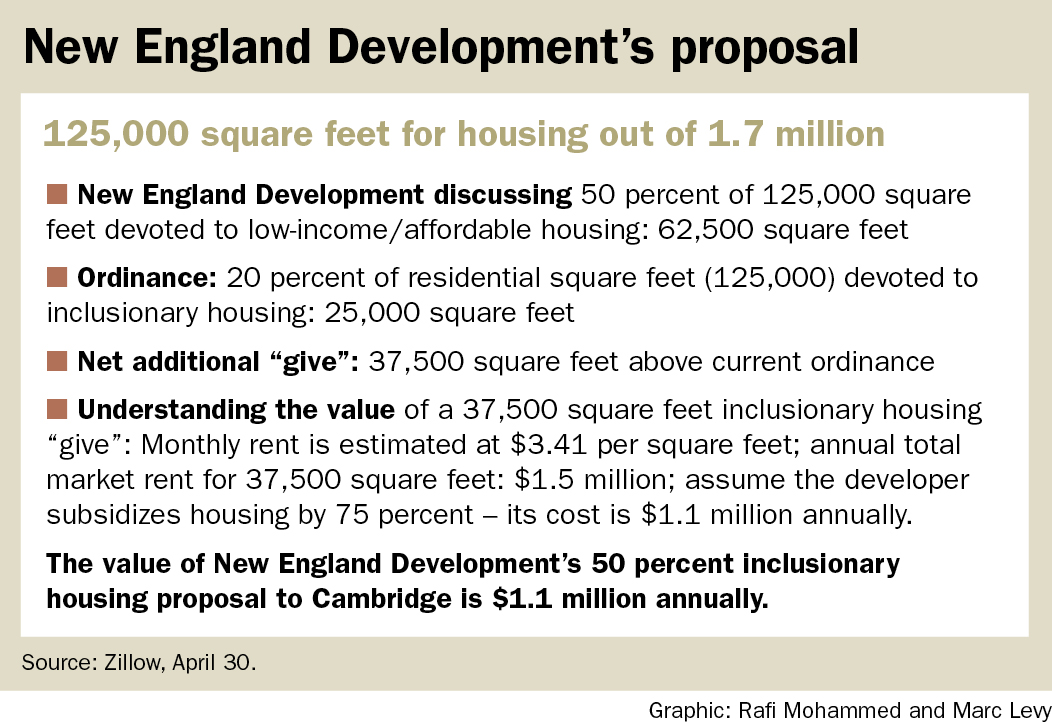 Here’s the bottom line: The city shouldn’t be drawn into the classic negotiation game of one side throwing out an outrageously high demand (“Raise building height by 118 percent!”) and bargaining downward. New England Development should justify why it’s financially mission-critical to break the current zoning rules to save the mall; wordy “it’ll cost a lot” explanations aren’t sufficient. Instead, the company should provide actual figures to prove why building heights need to exceed code in an area where developers have stayed largely within building height code.

More importantly, the council needs to rethink how it handles these rezoning positions. Its goal should be more robust than striving to offer the lowest property taxes. The city should have a rigorous methodology in place to evaluate the community costs of upzoning from proposals such as at CambridgeSide. While it’s easy to dismiss “if you live next door” costs, they are real and have long-term effects that can’t be reversed. A moratorium on increased density projects should be imposed until these downsides can be understood fully and incorporated into zoning decisions.

Rafi Mohammed is an economist who has lived in East Cambridge for more than 20 years. He is the author of “The Art of Pricing: How to Find the Hidden Profits to Grow Your Business” (Crown Business) and “The 1% Windfall: How Successful Companies Use Price to Profit and Grow” (HarperBusiness).

This post was updated May 25, 2019, to adjust some figures and graphics.