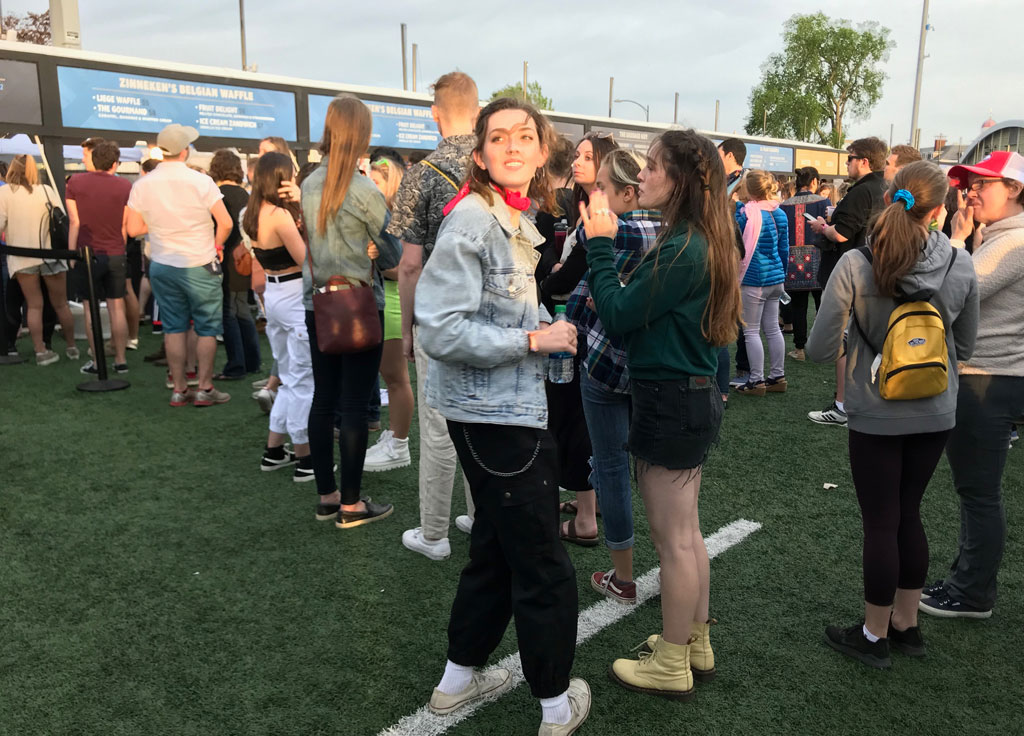 Music from a Boston Calling stage draws the attention of a festivalgoer waiting in line Saturday in Allston for a food stand run by a Harvard Square business. (Photo: Marc Levy)

Cambridge celebrated the three-day Boston Calling music festival, now just past its 10th year but only the third in the Harvard Athletic Complex across from Harvard Square, in its usual fashion: obsessing over the Memorial Day weekend noise.

“The bass is booming non-stop, literally shaking our walls, and my 1-year-old son is trying to sleep. I like that there are events like this, but there’s no way it needs to be so loud,” said one commenter on Nextdoor, a neighborhood-based platform where residents compared notes on how far away the music could be heard – to Davis Square and Spring Hill in Somerville at points, while at times the sound barely carried into Harvard Square – and whether the volume was higher or lower than years past.

In dialogues also taking place on Facebook, residents traded views on whether it was just the price of living in the city (“If you don’t want city life, move to the ’burbs”) and variously waxed philosophical (“Having gone to a few of these events in my youth, I guess I am happy they still occur”) or argued that, with few local bands making it onto Boston Calling stages, their patience was minimal (“If it was free, I wouldn’t care, but they’re making gobs of money and subjecting us to the unnecessary extreme volume.”) 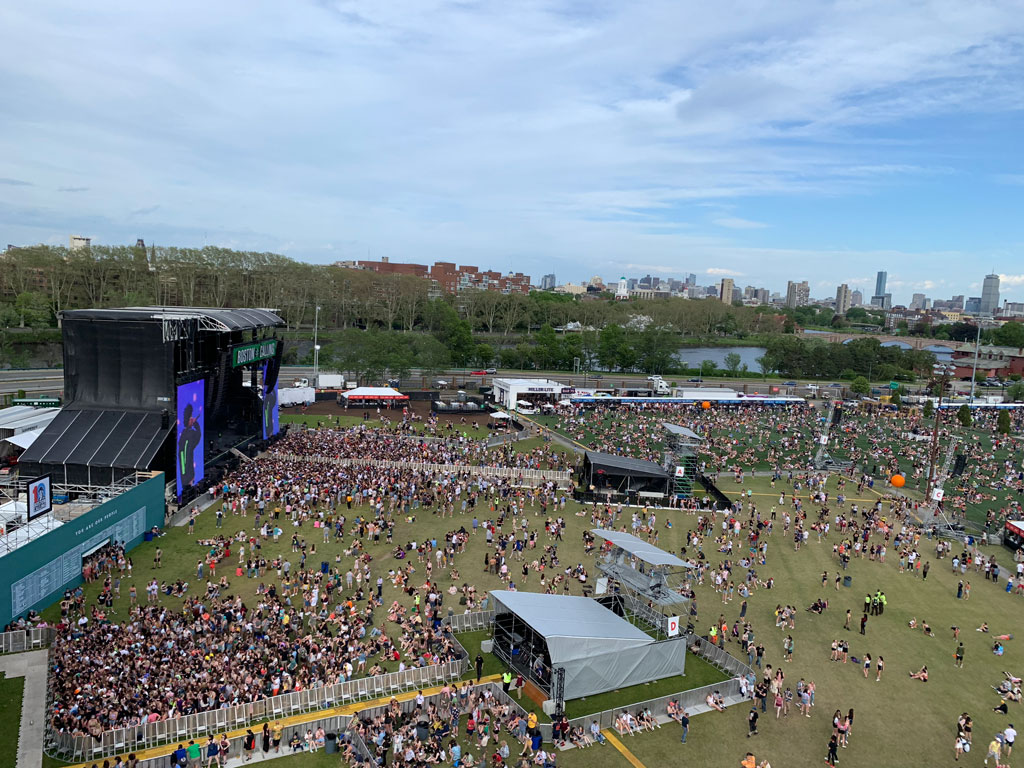 “It can be very big weekend”

For others, the festival was a less ambiguous win.

“From a business perspective, having an additional 25,000 people walk through the square on Friday, Saturday and Sunday – not a bad thing, right?” said Denise Jillson, executive director of the Harvard Square Business Association. “The retailers and the restaurateurs look forward to it now in the same way that we look forward to the Harvard-Yale game every other year, or even commencement. It can be very big weekend in the square.”

Shops on JFK Street benefit the most, as it’s on a direct route across the Anderson Memorial Bridge to the Allston festival from the Harvard Square T stop. But Brattle Street businesses also see an uptick in business, Jillson said, and the association tries to promote businesses farther down Massachusetts Avenue especially for people who may be first time visitors to the area. (Interviews Sunday at Boston Calling readily turned up many visitors from Connecticut, New York and New Hampshire.) Some festivalgoers take advantage of Boston Calling’s wristband access to duck in and out depending on the performer, and they come to the square between bands. “That part is, is very, very good for us,” she said.

Suzanne Preston Blier, of the Harvard Square Neighborhood Association, also appreciated the bump Boston Calling could provide to local businesses feeling pressure from rising rents and decreasing foot traffic as parts of the the square shut down ahead of long-term construction projects. “There’s real nervousness [around] the fact that the boards are going up and people are not going to be finding their way into businesses,” she said. “We are really supportive of events such as Boston Calling that will bring more local people and outsiders into the square and help contribute to the economy.” 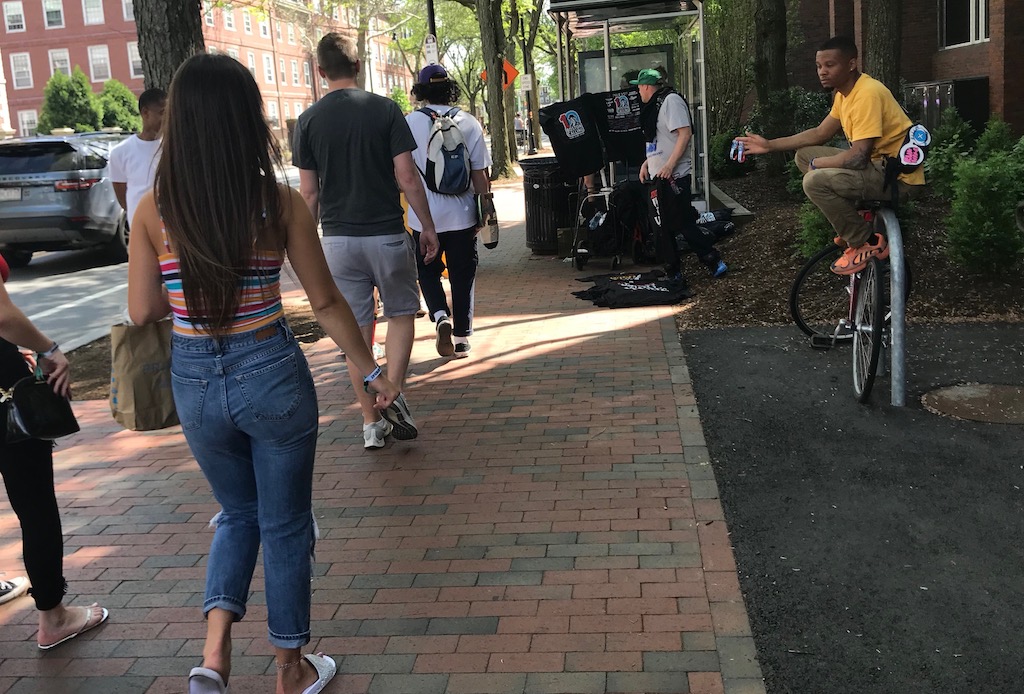 Bootleg merchandise vendors and ticket resellers – not to mention buskers and people with crates of water bottles – set up along JFK Street in Harvard Square on Sunday to entice dollars from Boston Calling festivalgoers. (Photo: Marc Levy)

Cottage industries of merch and water vendors and guerrilla musicians set up along JFK Street in hopes of drawing off money that would otherwise be spent on festival grounds, but there’s also a more official way Boston Calling benefits the local economy: By bringing in local food vendors, including Whole Heart Provisions, a healthy eatery with bricks-and-mortar locations in Central Square and Allston, and barbecue from Kendall Square’s The Smoke Shop.

Considering the “steep prices” paid for Boston Calling tickets – three-day passes for more than 50 acts across four stages can be as low as $249 for early buyers or more than $1,100 for top VIP access, and general admission for a single day is $114 – Blier hoped to see a direct financial contribution from organizers. “It would be important that some of the revenues from this get distributed in a way which will be helpful to Harvard Square and the neighborhood in addressing some of the ongoing problems we have here,” she said.

The festival, despite its scale and need for medical and law enforcement presence from Cambridge, Boston and state police, is a generally low-key event.

Over the course of three festival days, Cambridge police had one medical call for service – believed to be the result of intoxication, said Jeremy Warnick, director of communications and media relations for Cambridge police. “Otherwise, while there was a steady flow of patrons walking to and leaving the event, there were no problems to report. The crowd was orderly each of the three days and nights walking to and from Harvard Square to the Boston Calling venue,” he said. 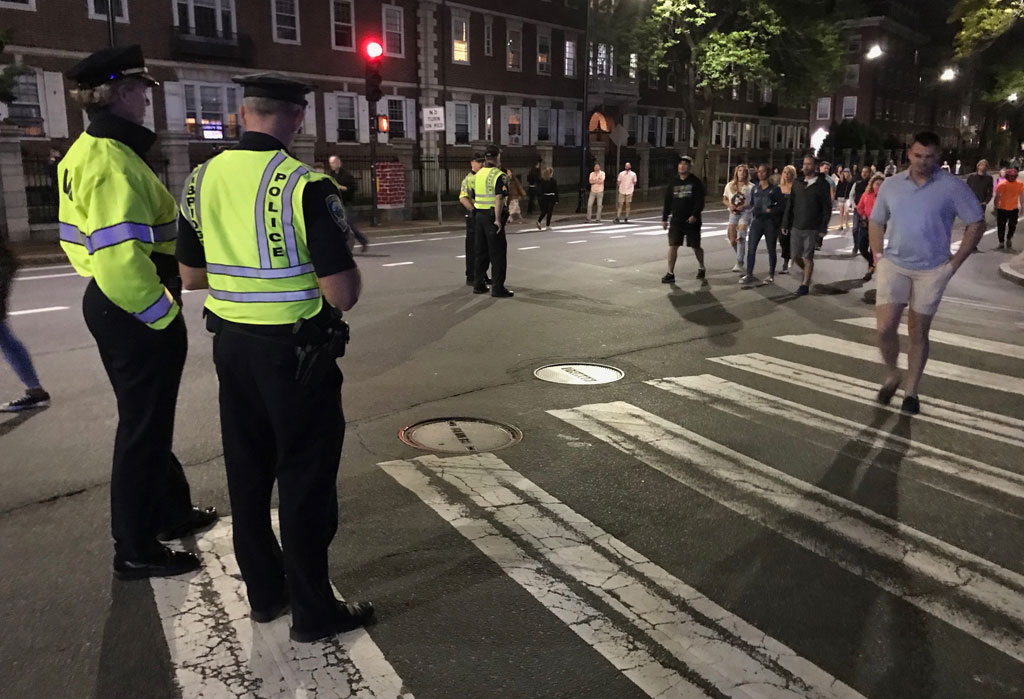 As to the noise, the biggest problems resulted from a single rogue band on Saturday night, according to Warnick and vice mayor Jan Devereux, who engaged with constituents in real time on social media as the festival went on.

“One of the acts overrode the agreed-upon settings on the sound board, and the promoter’s sound engineer couldn’t dial it back in time. On Sunday the promoter assigned an engineer to supervise each act so that couldn’t happen again,” Devereux said.

The festival has a neighborhood hotline number for noise complaints. Others go to police, but the calls were “minimal’ Friday, and after Saturday’s spike, changes by sound engineers cut the number of noise complaints on Saturday by more than half on Sunday, Warnick said.

Still, Blier said she was troubled by the ability of a single band to disrupt so many people’s night – not to mention the noise levels varying so wildly even by relocating a couple of blocks. “If there is supposed to be a science of sound and acoustics and how sounds ricochet off buildings and in relationship to many other things, I think it needs a lot more work,” she said.