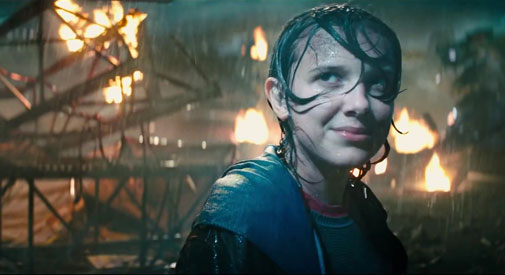 Who knew that “Godzilla: King of the Monsters” was a Boston movie? I won’t say how much it is, but I will say that the oldest ballpark in the country (RIP Bill Buckner) and that iconic high-rise so eloquently framed in a semi-famous short story by John Updike make it in there – and then some. The Japanese-launched franchise has matured to full CGI fury, improving on the effects in versions from 1998 and 2014 and certainly from its 1950s beginnings, when miniature models of Tokyo were stomped by a man in a rubber suit. (Let’s call those the MIRS years.) 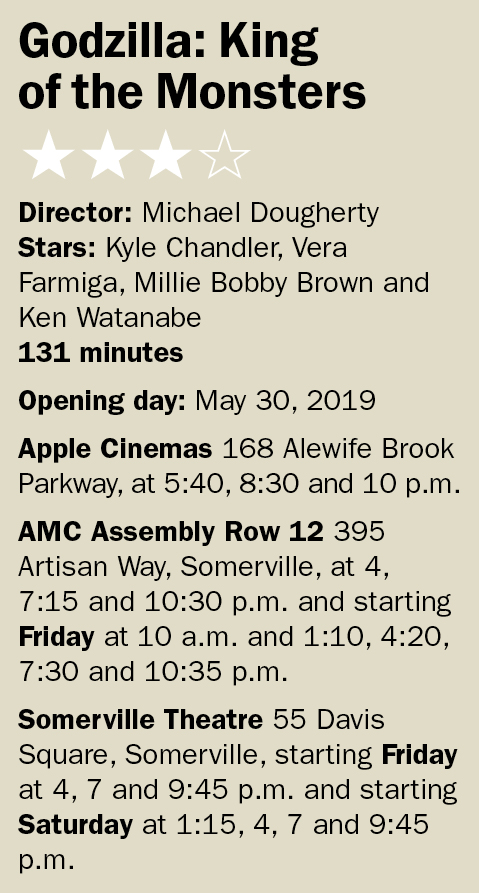 The tagline is the same as in 1956, when American actor Raymond Burr (“Ironside”) lent his American mug to an early Japanese MIRS entry. Here, the film picks up five years from when “Godzilla” (2014) left off, namely the leveling of San Francisco, with all “titans” now neatly in hibernation. Some players from that chapter (Sally Hawkins and Ken Watanabe) reprise their roles as scientists, appearing before congress to try to derail plans to exterminate Godzilla and the other titans – while in hibernation, a cryptozoological agency known as Monarch has pretty much put all the beasts in an electronic lockdown. We also meet the Russells, a family of Monarch scientists fractured by the loss of their son in the stomping of San Fran. The father, Mark (Kyle Chandler, so good in “Manchester by the Sea” and “Zero Dark Thirty”), unable to cope with the grief, has gone off to film wolves in the wilds, while wife Emma (Vera Farmiga) and daughter Madison (Millie Bobby Brown, from “Stranger Things”) are nestled in a forest abode near one such titan bunker where they witness the larval birth of Mothra.

Before the flaming pterodactyl Rodan and three-header King Ghidorah – aka Monster Zero – make it into the mix, of course we need some zany zealot to bring down the boom. In this case that’s a former British special ops officer played with charm and menace by Charles Dance, who has had an awakening of his own and sees the only way to right humankind’s environmental wrongs being to raise the titans and let them cull the population. Much philosophical talk is made early on about man being an infection, and the titans something like white blood cells to take care of it. Sure, okay, nothing new: The original Godzilla was an incarnation raised by man’s use of nukes and nuclear energy, so the themes imbued here by writer/director Michael Dougherty seem in line. And a little biorhythm device Emma has made (the thing everybody wants) has the monster-whispering effect that the two thumb-sized Japanese twins had in the old MIRS flicks.

But this is a big CGI flick, seen to good effect as Brazil gets bowled over by Rodan and Ghidorah (which, given all the talk of infections and viruses, sounds even more like an STD) gets awakened from his icy crib. Boston, home of the Russells, hosts a Godzilla-Ghidorah smackdown – and if some of those new high rises in the Seaport irk your aesthetic eye, here’s a shot at some virtual schadenfreude.

The film does what it needs to. The trio of lead actors manage to elicit enough emotion and Godzilla, a hero whose mission and morals are as straightforward as Clint Eastwood’s indelible “Man with No Name,” gets to don the superhero cape, if just for a small while. It’s bang-bang fun that clicks by with smart, rapid pacing, all the while reminding us of just how much a mess we’ve made of this planet.