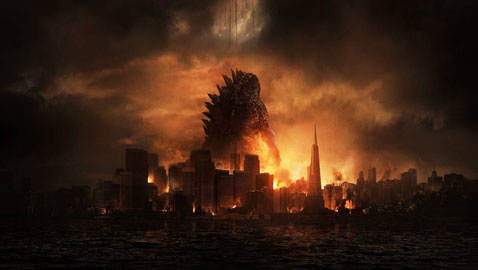 Serious actors in movies that feature monsters, cute kids or animals tend to fare poorly, ever upstaged by the title incarnation and addled by a blockbuster-minded script driven more by target marketing campaign goals than heart of character. Steven Spielberg might be the one great exception, but when you throw in mankind-crushing mayhem and imminent world destruction, as he did with the “War of the Worlds” remake, and even in his good hands some of the edge of his heartwarming fastball comes off. 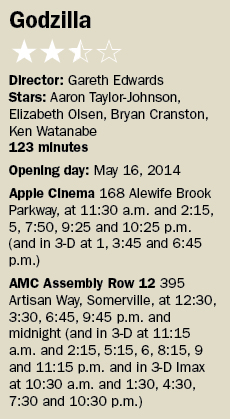 Why a “name” thespian checks into such a project has to be twofold: a leading-role paycheck for cameo work and exposure – “You’ll become a household name,” you can almost hear an agent say. Think of Marlon Brando in “Superman,” a record payday for a few minutes of labor, though by that time he couldn’t much care about exposure because it invariably became fodder about his increasing corpulence. One too might think of Raymond Burr (“Perry Mason” and old “Ironside”) appearing in the 1956 American recut of the 1954 Japanese “Godzilla” (née “Gojira”). To garner a U.S. market, Burr was edited in as an American in Tokyo as the infamous dino-beast rose up from the ocean depths and merrily stomped the port of Japan.

Which brings us to today. Here, in the 2014 update, which thumbs its nose at Roland Emmerich’s poorly received big-budget go back in 1998, we get Bryan Cranston, Juliette Binoche, Sally Hawkins, David Strathairn and Ken Watanabe. That’s one Academy Award, a few Emmys and a fistful of nominations – pretty serious stuff to be playing around in Gojira land. Last summer “Pacific Rim” tried to spin the mega beast stomping out humanity into a mano y mano cage fight. It nearly succeeded, but the equilibrium between the human drama and the super spectacular smackdown in the denouement is a high-wire balancing act not meant for amateurs. Even proven helmsmen have fallen.

Enter Gareth Edwards, whose end-of-the-world, alien-invasion debut, “Monsters” (2010) was a lot sharper than its uninspired title. He adds flesh and soul to “Godzilla” with Cranston playing Joe, an American engineer in Japan overseeing a nuclear power plant. Joe’s on edge over some recent seismic activity that makes no logical sense, and as you can probably guess, boom happens and the plant (a nod to the recent earthquake-reactor disaster at Fukushima?) implodes.

Flash forward 15 years. Joe’s son, Ford (Aaron Taylor-Johnson of “Nowhere Boy” and “Kick-Ass” notoriety) is a U.S. military bomb disposal grunt, but the kinder, more balanced version of Jeremy Renner’s mercurial sergeant from “Hurt Locker.” He’s married (to Elizabeth Olsen) with his own progeny in San Fran, but dad’s gone all Walter White, lurking around the cordoned-off reactor site trying to prove a conspiracy. Sure enough, he’s onto something and gets into hot water over it. Ford’s got to hop the Pacific (ah that rim) to bail dad out, all just in time to see the hatching of a winged kaiju, looking like a fusion of Rodan and the incarnation from “Cloverfield,” that had been gestating in the plant.

Where is Godzilla or Ms. Binoche, one might ask? I won’t tell you the latter, as it would be an unfair spoiler (there’s a plot thread that seems to be lost in the story), but good old ’Zilla comes on up from the depths to have a go at it with the winged beast know as a MUTO (an inane acronym that would appear more silly with explanation, so I’ll save the surprise of the groan for the theater). Part of Japan gets trampled in the first round, as does Hawaii and Las Vegas at the midway point, with Ford’s home base serving as the stage front for the Thrilla in Manila.

It’s here too that the long-brewing human drama is neatly jettisoned and the CGI behemoths topple buildings like ankle-high building blocks. There’s not that much joy in it. It was so much more fun when the guy in the rubber suit kicked around train sets like a rock star having a bad day. There you could take the silliness seriously and you didn’t need “actors” or Hollywood to make it so.

The poetic political zing to the classic “Godzilla,” which is largely absent here, was that the monster was a Cold War baby boomer born of Japanese imagination steeped in the memory of Hiroshima and Nagasaki and attributed to U.S. nuclear experiments in the South Pacific. In the age of dirty bombs we have Hawkins and Watanabe onboard as scientists who show up from time to time like a Greek chorus to give us spoonfuls of ’Zilla history and make sense of the confounding nonsense. In his solemn proclamations Watanabe talks about Godzilla as an ancient apex predator who by default is on earth to help maintain the balance of nature. If the world was built by intelligent design, this would seem about as good of an idea as nuclear arsenals. The balance in such a universe would be skewed by the hand that holds its finger on the button, be it the higher calling of the dino-from-down-under, the governing body of a nuclear state or the powers that be in Tinseltown.