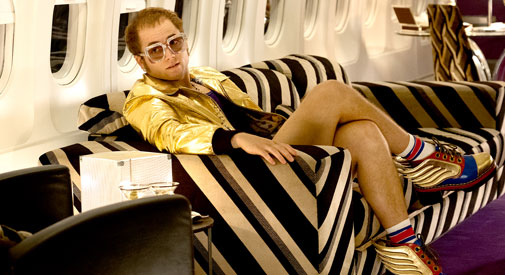 It’s difficult to judge a musical biopic without grading on a curve, thinking less about  “extraordinary” and more along the lines of “better than the last.” On the latter front, “Rocketman” by far surpasses last year’s neutered and insulting Freddie Mercury flick “Bohemian Rhapsody” and, even beyond that slightly unfair comparison point, is a pretty fabulous ode to a legend. It fails to buck every tired trend of the genre; there’s too much time spent pre-big break, and too much reliance on racing us through Elton John’s moments of debauchery and drugs to try to fit as much storyline as possible into a packed two-hour runtime. But when director Dexter Fletcher allows star Taron Egerton to run wild, well, “Rocketman” is pretty damn near spectacular. There’s a gleefully electric charge to the better musical moments and a clear urge to abandon conventional linear storytelling, playing with standard jukebox musical conventions to provide music and madness in equal measure. It’s a spark Fletcher isn’t able to keep aflame for the entirety of the film – but for the best moments of “Rocketman,” it burns hot. 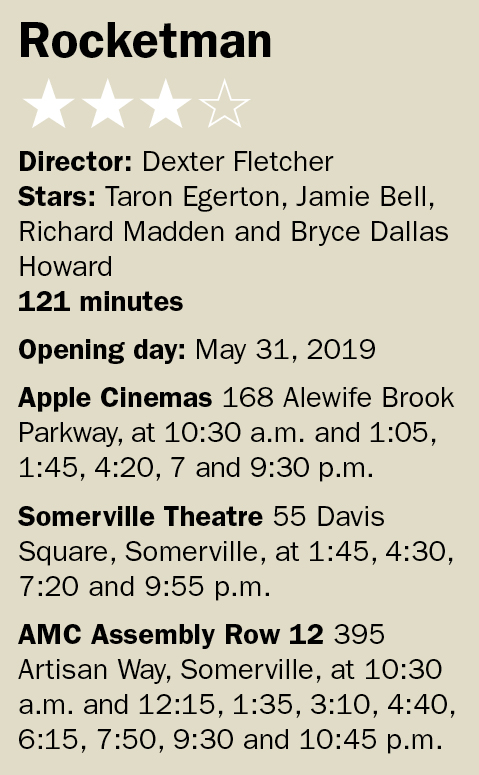 The story is standard: A young man with a tremendous amount of gifts makes it big and, after playing his music for the world, falls into an oblivion of drugs, booze and sex that threatens to steal everything he’s created. We’ve seen this level of visual opulence in musicals before (films such as “Across the Universe” and “Moulin Rouge!” did so with much greater confidence and delivery) and every year we see some sort of narrative that follows this path, but Fletcher and screenwriter Lee Hall lean into Elton’s open vulnerability. He isn’t just flawed, but openly yearning for love, and the film is transparent about it. The “musical fantasy” portions help. The screenplay takes liberties with timelines, and the arrival of each song is fitted to a moment – using “Tiny Dancer” in a moment of loneliness or “Rocketman” as an expression of the euphoria and unquenchable despair that comes from warding off sobriety.

Despite these highs, Fletcher’s stilted direction causes the set, production design, choreography and leading man to bear the weight of the film’s charms. The film and Fletcher’s direction would’ve done better to try to sparkle as much as the orange horns that adorn Elton’s magnificent headpiece that bookends the story. (Elton’s outfits, which make him stick out like a fluorescent sore thumb, show who he feels the need to become to welcome the adoration of an audience, and it does much to convince us of his insecurity.) Imagine what someone such as Julie Taymor or Baz Luhrmann – each director have taken classic songs and elevated them to vivacious, unexpected heights – might have done with this material.

The first song that kicks the film into high gear, merging energy, production and pageantry, is also the first number Egerton leads as the adult Elton: “Saturday Night’s Alright for Fighting.” Thrumming with the energy of a concert hall, alive in a way that helps mimic the sense of urgency one must’ve felt at one of the singer’s earlier showcases, it’s pure showstopper, marrying everything that embodies Elton as a performer into a visual extravaganza.“Rocketman,” “Crocodile Rock” and “Benny and the Jets” are other standouts.

None of this would’ve worked without the right star wearing the bedazzled spectacles and impressive heels, and Egerton introduces himself as an assured, wildly charismatic performer in a career-redefining role. The rest of the performances vary, with Jamie Bell carrying an easy charm as Elton’s longtime lyricist Bernie Taupin and Bryce Dallas Howard miscast as his dismissive mother; Egerton both anchors the film with raw sincerity and allows it to take flight. He’s simply magnetic, gracing the singer with just the right amount of tempestuous vulnerability, petulant anger and a very naked want for affection that allows the viewers to sympathize even in his lesser moments. His scenes of affirmation, success and musical exploration are evocative because this is less a portrait of a superstar and more a finely sketched image of someone who is impossibly human. It certainly helps that he has quite the vocal talent, singing the famous songs himself without mimicking the original tone.

It’s what makes the standard beats land with such hollow thuds – by the time the film rushes to the finish line for a forced happy bow, we’ve seen the potential the film had to truly run wild with a story that deserved that level of chaotic energy. “Rocketman” is far from a failure, too fun and musically abrasive for audiences to lose interest in. Regardless of its shortcomings, the film’s love of its subject matter is apparent, managing to help raise the predictable into something more daring and visually exciting than it has any right to be.