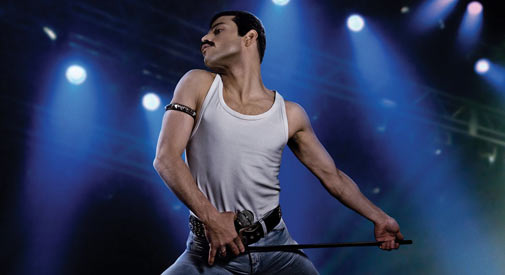 Freddie Mercury deserved a director and screenwriter with an ounce of his prowess to tell his story. Regardless of the misleading title “Bohemian Rhapsody,” this is his story – but an audience member would be better off scrolling through his extensive Wikipedia page to simply learn about the man behind the legend (and legend he was, though the film seems to admit so with a roll of the eyes.) There is no arguing the sugary, high level octane the picture operates on, desperate to please. But it’s only in a family-friendly manner that doesn’t offend and, in the end, doesn’t inspire. It’s fun in the moment, but bitterness lingers over the waste of an opportunity and seeming drive to fit everything that made Mercury – an exuberant maverick, unquestionably iconic lead singer of Queen and pioneering showman – into a neat box the man himself would detest. 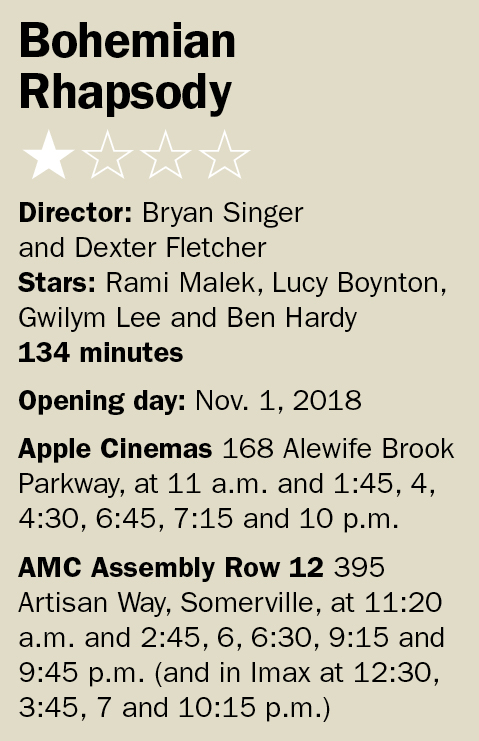 Sanctified and shallow and casting a perplexing “otherness” lens onto Freddie’s sexual exploration – it’t dubbed in an ominous red glow and juxtaposed with a mounting drug habit – few biopics have held such little love for the person behind the legend. Following his joining the band and all the way through its famous Live Aid performance, the film pays no mind to linear time stamps, instead asking us to keep up with a breakneck pace that doesn’t allow for meditation on some of the more monumental moments in a career full of them. Written by Anthony McCarten (who wrote the similarly vapid “Darkest Hour” and “The Theory of Everything,” which succeeded based on explosive leading performances) “Bohemian Rhapsody” is too engaged with the spectacle to take heed of the very human, inherently mystifying and intriguing man at its core.

Rami Malek brings an electrifying energy to the screen, distracting veneers and wigs aside. As Mercury he has a feline energy, manic but composed, wide-eyed with a mischievous tint – and in any other hands he may have fared better, but director Bryan Singer (“X-Men”, “The Usual Suspects”) wasn’t remotely up to the task. Faced with decades worth of abuse allegations and disappearing from set before being removed from the film, Singer’s direction is a lack thereof, slapping together scenes that fit a general flow of a film without any sense of rhythm: a pop song without the soul, or a rock anthem without heart. Everything is big and loud and boisterous but nothing matters, aside from what fans know of the band and Mercury and any affection brought into the theater with them. Possessing some of the more incomprehensibly ugly shots in film this year, the tired imagery and disinterest in creative storytelling are just a few of the signs of discontent behind the screens. (Singer was fired and replaced by Dexter Fletcher with two weeks to go. Singer gets sole screen credit.)

Malek singlehandedly makes the film bearable and, depending on the audience you’re with, may fool you into believing you’ve seen a crowd-pleasing piece of fluff. But there’s an insidiousness in a narrative that portrays Freddie swinging in mansions filled with strangers and cats, drugged up and self-destructive, as the band goes home to their heteronormative lives, sober and smug. A large portion of the film is dedicated to his long-term relationship with a woman, but only a beat of a moment with the man who would spend six years with him, up until his passing.

If the rousing final moments are the ones you remember, as Malek gives his all to embodying the live-wire charisma that Mercury exuded so effervescently onstage, there’s a chance you’ll leave fulfilled; they’re the only inspired moments of the overlong runtime. There’s such a want to enjoy this film, to listen to the music only and watch Malek work the stage and simply get lost in the songs that have become deservedly timeless. Beyond Mercury and Malek both deserving more than what they were given and portrayed as, the audience deserved a film that dared to be more than a fleeting and self-loathing jab at iconography.