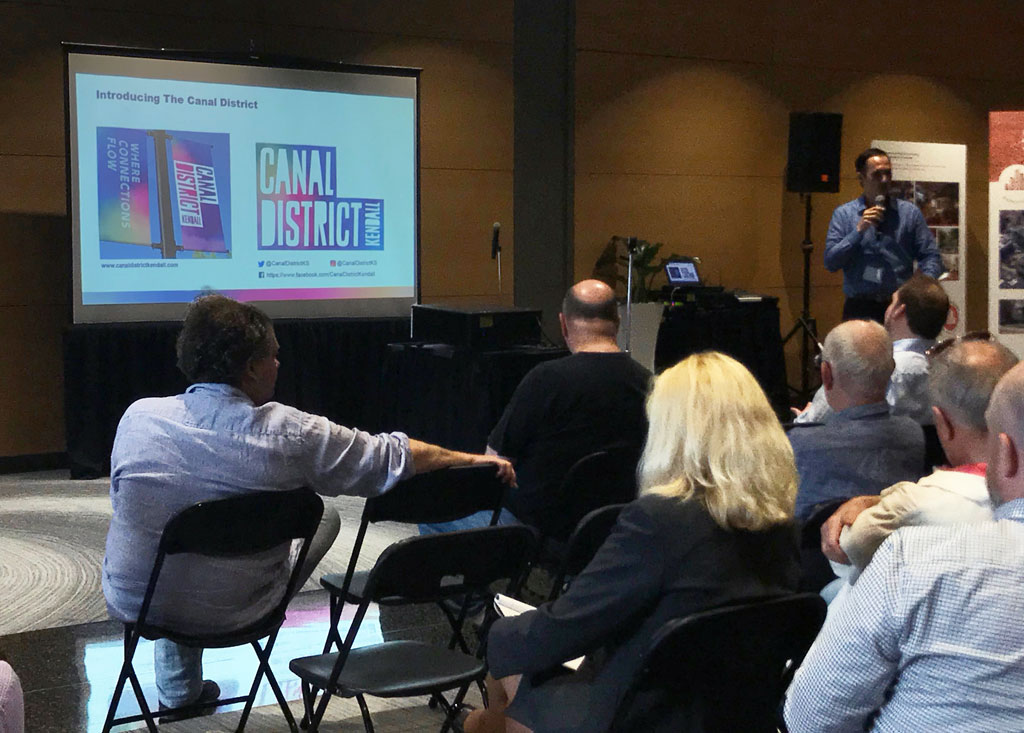 Salvatore J. Zinno, vice president for development at BioMed Realty, introduces a rebranding of its 10 acres in Kendall Square to the Canal District at Kendall. (Photo: Marc Levy)

If you’re in Kendall Square around the kayak launch or eating at Evoo or Za, or maybe if you’ve wandered down to the ArtScience Culture Lab & Café or the ice skating rink in Termeer Square, as of Thursday night you’re roaming the Canal District.

BioMed Realty, the real estate company, announced the rebranding of its 10 acres previously and somewhat awkwardly known as Kendall Square at Kendall Square.

“We’re going to change that with the creation of the Canal District at Kendall,” said Salvatore J. Zinno, vice president for development at BioMed. The rebranding takes its name from Broad Canal, which juts in from the Charles River toward the district’s southern end. “We see this as the first step in changing this site and bringing this arts and culture component to it.” 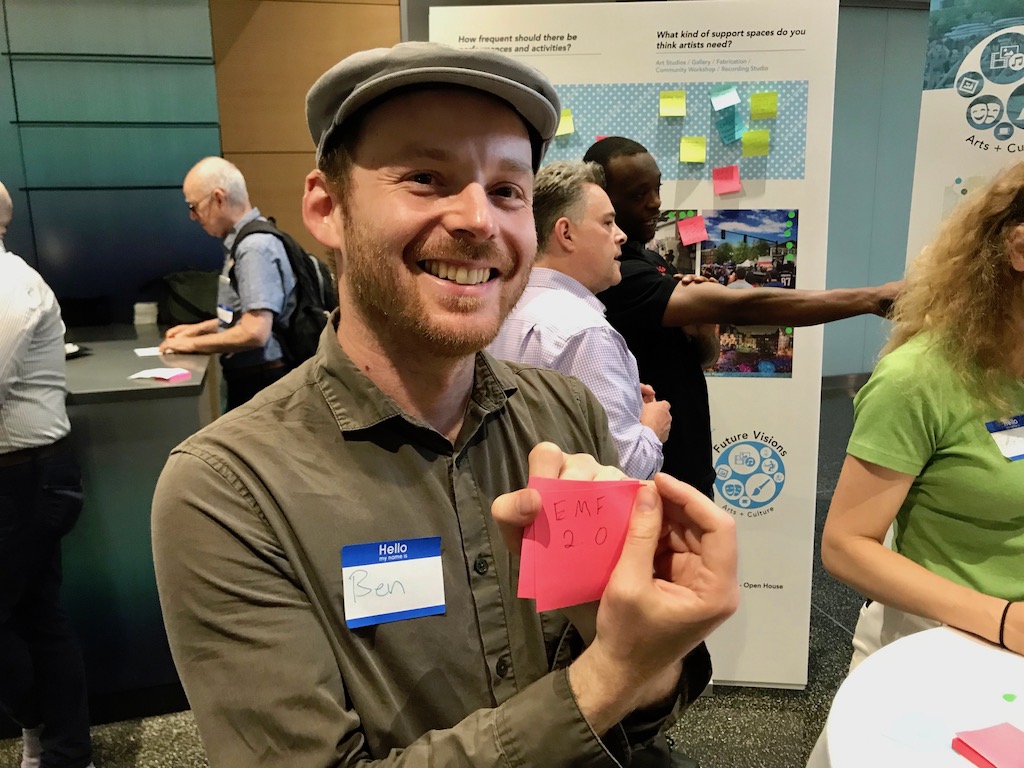 The change was introduce by surprise during a well-attended open house to discuss what will become of the so-called Parcel C – a 35,865-square-foot lot at Kendall and Athenaeum streets that for nearly two decades was expected to be turned into a grand performance hall called the Constellation Center. BioMed bought the parcel in August for $50.5 million and now is soliciting citizen input on how to fulfill the arts and culture component of zoning granted in 1999 as part of the 1.3 million-square-foot Cambridge Research Park.

There is no timeline for building on Parcel C, according to BioMed officials and consultants, and even a second open house to solicit ideas is expected but not yet scheduled. About the only thing that’s certain is that whatever project emerges will demand a change in use – because BioMed says it’s committed to an arts use that serves the community, which will need some combination of residential, office and lab use attached to work financially.

“The only use that zoning allows is performing arts, or you could switch it to residential,” Zinno said. “We’re going to propose a rezoning for the site.”

That allowed citizens’ imaginations to go in a variety of directions as they feasted on a buffet and visited stations set up in BioMed’s lobby to solicit ideas ranging from “What do you want in a public space?” to “What kind of support spaces do you think artists need?” People placed Post-its or wrote notes seeking outdoor music, dance classes, dog parks, beer gardens, interactive art and “fun shops,” seeking programming as often as daily; and proposing affordable artists’ studios; galleries, exhibition spaces, an area for virtual reality entertainment, a black box theater and a large performance hall like what the Constellation Center would have provided. Ben Simon, a City Council candidate motivated to run by the destruction of the EMF building’s music community near Central Square, knew what he wanted in the Canal District: EMF 2.0.

As envisioned on a preliminary map of the Canal District, the arts and culture space coming to Parcel C is faced away from Third Street and toward a plaza, making for a more unified public space with Termeer Square. Retail is envisioned as stretching along Kendall Street from Third Street to the plaza.

More than one person raised the idea of having the public performance space on the roof of a Parcel C building instead of at ground level, creating something unique in Cambridge that could offer an impressive backdrop for events and, in good weather, open-air offerings. It would allow for potentially more retail at ground level, but require BioMed to innovate locally in something more common in cities such as New York: setting aside a mid-building floor for mechanicals such as air conditioning and heating rather than using the roof. 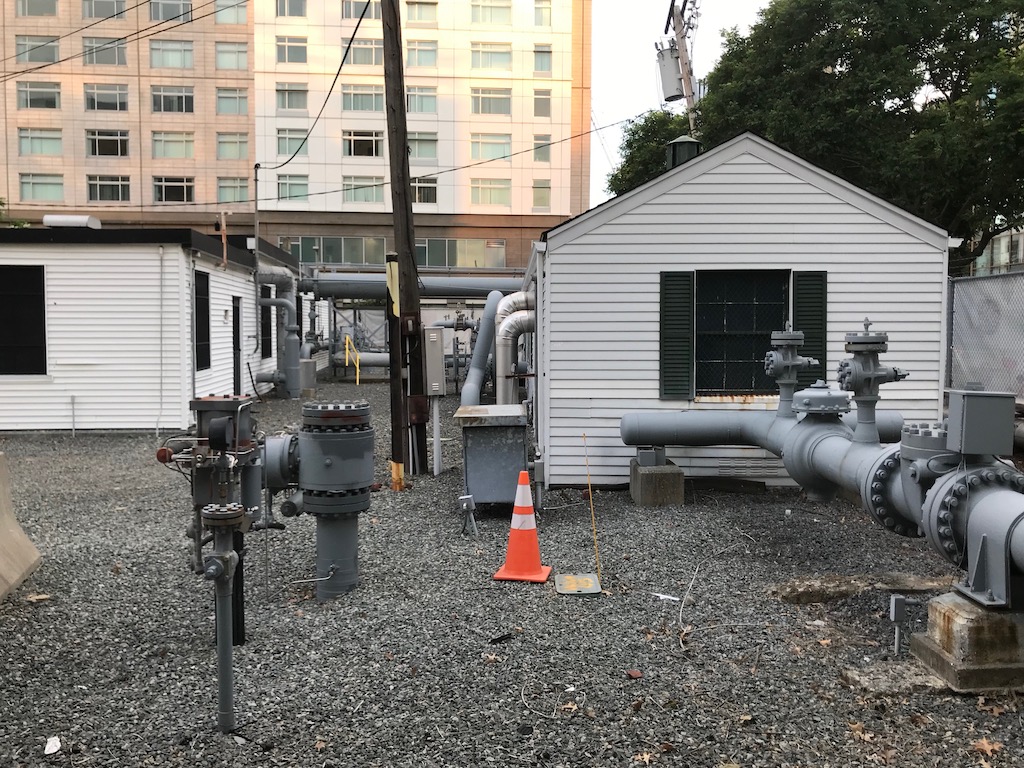 An Eversource gas transfer station on Third Street in Kendall Square is called a hurdle by BioMed Realty in developing Parcel C with an arts and community focus. (Photo: Marc Levy)

Parcel C already has a huge industrial problem to cope with: the Eversource gas transfer station providing unattractive frontage on Third Street. BioMed has been working with Eversource for four years on how to move the “ugly, hissing monster” that sits between Third Street and Parcel C, Zinno said. “We think that as part of this larger Parcel C project we’ll finally have a way to make that happen. It’s a relatively small site, but it’s obviously very difficult to move – there’s a lot of underground piping and other complications,” he said.

It’s also the most concrete hurdle to what BioMed envisions for Parcel C’s eventual role in the Canal District.

“We’re [looking at] the notion of not just a standalone formal performance venue, but arts and culture more broadly,” said Ken Greenberg, master planner on some of the earliest work shaping the 10-acre site in the 1990s, now back to work with BioMed on the final piece of it. He encouraged residents at the open house for ideas that are “not just contained within the building, but interact with the public realm around and complement the activities already available in Cambridge … We want this to be inclusive in a way that invites the full range of people living and working in Cambridge onto the site. We want things that would attract them, serve them, and bolster a sense of community and belonging.”

BioMed has already provided space through October to CultureHouse, a “living room for the community” or “indoor public park” that launched last summer in Somerville’s Union Square.

The company is planning events not just to develop ideas for Parcel C, but to introduce the Canal District at Kendall, Zinno said.

The several dozen people in attendance, which included the Planning Board’s Hugh Russell, School Committee member Fred Fantini and a strong showing by residents associated with the East Cambridge Planning Team, seemed receptive to the rebranding.

“It makes it a location. I love it,” said Chuck Hinds, president of the East Cambridge Planning Team.