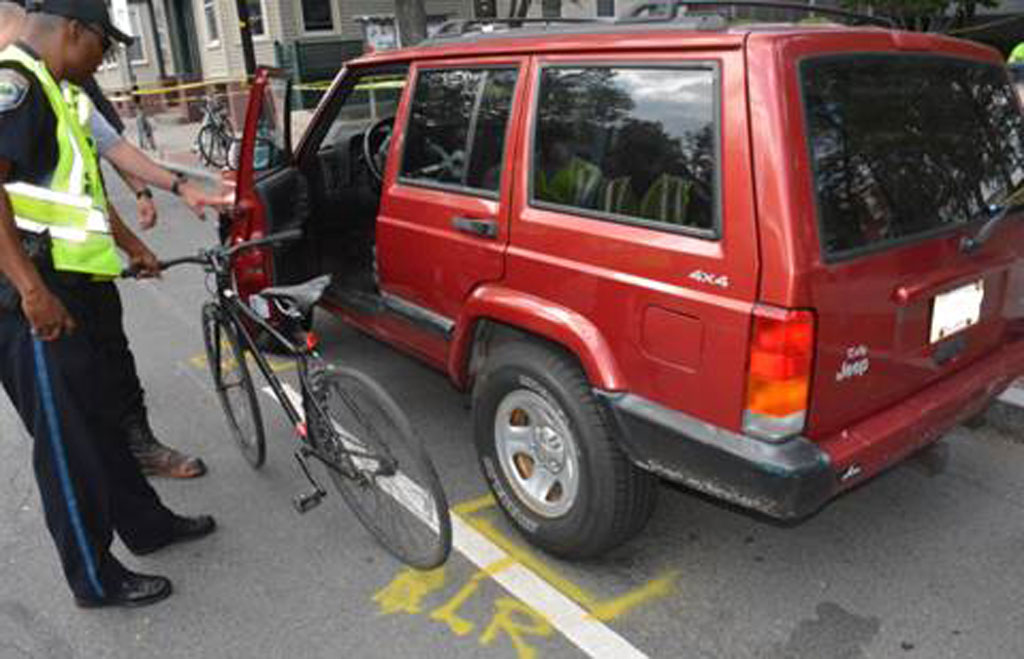 No criminal charges or civil infractions will be filed against the drivers of the Jeep or landscaping truck involved in the June 23, 2016, death of bicyclist Amanda Philips, 27, of Somerville, in Inman Square.

An investigation released Tuesday showed “that this crash was unavoidable” based on reconstruction of the collision, a visibility study, a vehicle examination, a review of available surveillance footage and witness interviews, as well as other efforts, according to the office of Middlesex District Attorney Marian Ryan.

Phillips was riding on the sidewalk shortly around 12:12 p.m. that day, then headed to the street behind a 1999 Jeep Cherokee  parked in a marked space on Cambridge Street. The driver, a 47-year-old Somerville man, was getting out at that moment, and Phillips’ bike struck the opening door, riding into the path of a landscaping truck being driven by a 66-year-old Woburn man.

“The bicycle overturned, and Phillips traveled along the road surface before entering the path of travel of a single-axle dump truck landscaping vehicle, towing a trailer, that was traveling west down Cambridge Street,” the report says. “Phillips subsequently became lodged under the right rear tires of the truck. Phillips was not immediately alert, but became responsive before being taken to Massachusetts General Hospital, where she succumbed to her injuries later that day.”

The investigation concluded that the owner of the Jeep was likely not able to see Phillips in the roadway before opening the door, and that Phillips likely would not have seen the open door – already open for “a couple of seconds,” according to a witness – from where she’d been on the sidewalk.

There was no evidence the truck driver was speeding at the time of the crash or operating illegally otherwise. “Based on the way Philips entered the roadway, and that she was struck by the rear tires of the car, the operator of the truck could not have avoided the crash,” investigators said “The collision with the landscaping truck was unavoidable.”

Bicyclists are allowed on sidewalks outside business districts when necessary in the interest of safety, but based on the investigation, “Phillips may have been more visible to other persons in the area, including the owner of the Jeep, had she been riding her bicycle consistently in the rightmost travel lane as directed by the painted markings on the road surface instead of the sidewalk,” the report says.

Phillips was an Inman Square resident studying at the Massachusetts General Hospital Institute of Health Professions and a longtime barista at Diesel Cafe in Somerville’s Davis Square.

Her death, and that of bicyclist Dr. Bernard “Joe” Lavins in October 2016, helped speed changes to road infrastructure throughout Cambridge that has sometimes been controversial. When a report on Lavins’ death was released in April 2018, some people upset about the rollout of bike safety lanes and other changes wondered about how the changes would be seen if Phillips after it was known she had ridden out into traffic.

The finding that the fatal crash was “unavoidable” might be true from a criminal justice perspective, but is false from a broader perspective, said Nathanael Fillmore, of the Cambridge Bike Safety group, which believes the report’s focus on whether the immediate participants in the crash could have avoided the crash “misses the point.”

In a statement from the Cambridge Bike Safety group, Fillmore said:

Even reporting on the day of the death said that a preliminary crash reconstruction by state police suggested she “had entered Cambridge Street from the sidewalk,” and it remained part of the narrative six days later as Phillips’ “ghost bike” memorial was dedicated.

A report on the crash is here.

This post was updated July 2, 2019, with comments from Cambridge Bike Safety and later to remove videos showing Inman Square at the time of the collision.