A week of events in Cambridge, Somerville: Christmas Cavalcade, Holiday on Ice, more 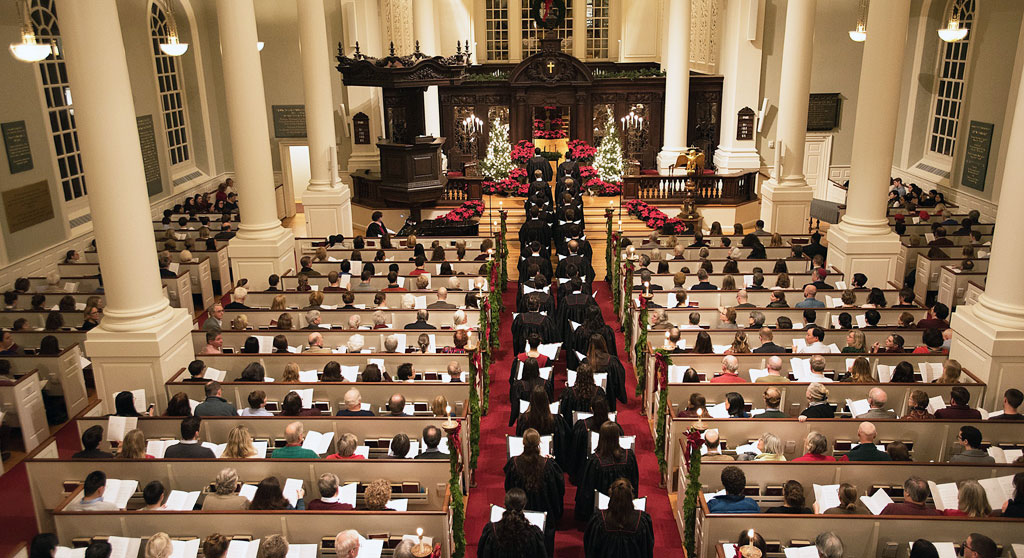 A week of events in Cambridge, Somerville: Christmas Cavalcade, Holiday on Ice, more

Marc Goldfinger reads at the Lizard Lounge Poetry Jam & Slam from 7:30 p.m. to 1 a.m. The Lizard Lounge, 1667 Massachusetts Ave., between Harvard and Porter squares. Tickets are $8. Goldfinger, columnist and poetry editor at Spare Change News, with works published by the Ibbetson Street Press, the Aurorean and many others, features with jazz backing by the Jeff Robinson Trio. Information is here.

110th Annual Christmas Carol Services from 8 to 10 p.m. at Harvard Memorial Church, 1 Harvard Yard, Harvard Square. Free, with an offering for charity collected. Sung by the Harvard University Choir, this is America’s oldest carol service, with a liturgy virtually unchanged since its first use in 1910 – making it potentially of historical interest even during the three lessons from scripture mixed in among choral and congregational carols. Information is here.

Singer-Songwriter Night XXVIII from 8:30 to 11:30 p.m. at ZuZu, 474 Massachusetts Ave., Central Square. Admission is $7 for this 21-plus show. Local acts perform 40-minute sets, this time including Mike Moore, Sebastian Aanonsen and Bix MacMaghan. Information is here.

Evan Jymaal Cutts at the Boston Poetry Slam, from 8 p.m. to midnight at The Cantab Lounge, 738 Massachusetts Ave., Central Square. There’s a $3 cover for this 18-plus show. Boston poet and writer Cutts – a member of the 2017 National Poetry Slam “Last Chance Slam” Team and with works at the Apogee Journal, Jabberwock Review, Juked, The Offing, Lumina Journal, Wildness and others – explores blackness, mythology and magic in a feature coming after an hour of open mic starting at 8 p.m. Information is here.

“Whore-ible Decisions” podcast taping from 7 to 10 p.m. at The Center for Arts at the Armory, 191 Highland Ave., Somerville. General admission is $46 (with fees, $49.35) for this 18-plus show. Catch up with Mandii B and WeezyWTF, tech and finance professionals who put out what Vice has called one of the raunchiest, “raciest, rawest podcasts on the Internet.” Information is here.

Weird Local Film Festival No. 11 from 7 to 10:30 p.m. at Warehouse XI, 11 Sanborn Court, Union Square, Somerville. There’s a suggested donation of $5 for this 18-plus show. There are 20 short works scheduled from “filmmakers in reasonable proximity to Somerville” for this semi-regular screening event. Information is here.

Boston Christmas Cavalcade for the Homeless from 7 to 11 p.m. at Once Somerville, 156 Highland Ave. Tickets are $20 (with fees, $24.13). The Chandler Travis Philharmonic hosts a holiday charity spectacular so ramshackle that it’s not quite clear whether it’s the 14th or 15th annual event. So far the performers coming together this year to help the Somerville Homeless Coalition are Livingston Taylor, Jen D’Angora (pictured), the Boogaloo Swamis, Sal Baglio & the Amplifier Heads, Jennifer Kimball, Chris Mascara, Shaun Wortis, John Powhida, Bearmonster, George Hall and Chris Barrett (of Kingsley Flood), Mark Erelli, Chris Cote, the Classic Ruins, Kevin Connolly, Trevor the Juggler, the No Brainers, Erica Mantone, Broadway Central and the Athol Thingerth. Information is here.

“The Slutcracker” from 8 to 10:30 p.m. (and repeating Friday, Saturday and Sunday and 10 more times through Dec. 31) at the Somerville Theatre, 55 Davis Square. General admission is $30. This burlesque event retelling Tchaikovsky’s holiday classic with a sex-positive (to put it mildly) message has been selling out shows since 2008. Information is here.

“A Midsummer Night’s Dream” solo performance from 7:30 to 9:30 p.m. (and repeating Saturday and Sunday) at the Multicultural Arts Center, 41 Second St., East Cambridge. General admission is $35 (with fees, $38.77). Two-time Elliot Norton Award winner Benjamin Evett brings Shakespeare’s comedy to life on his own – using only a few props to swap between 14 characters as part of the Queen Mab Micro-Theatre, with music composed and performed live by Jay Mobley. Information is here.

“Pride & Prejudice” performance from 7:30 to 9:45 p.m. (and repeating Saturday and Sunday) at the Masonic Lodge, 1950 Massachusetts Ave., Porter Square. General admission is $16 (with fees, $17.79). The wit and romance of Jane Austen’s classic 1813 novel comes to life in a fast-paced and engaging adaptation by by Jon Jory and performed by the Skylight Theater Collective. Information is here.

The Kerfuffle: “No Room At the Inn” from 9:30 to 11:30 p.m. at The Rockwell, 255 Elm St., Davis Square, Somerville. Tickets are $12 (with fees, $14.36). This holiday season show takes place on Friday the 13th, which is par for the course with a variety show that’s staked out a position “for all things absurd, hilarious, poignant, perilous, stupid, unpredictable, filthy and brilliant.” Information is here.

ColliderScope from 10 p.m. to midnight at Aeronaut Brewing, 14 Tyler St., near Union Square, Somerville. Free. Experimental music resulting from experimental physics in Switzerland – danceable electronic sound combined with the physics of the Large Hadron Collider at CERN. Information is here.

“The Slutcracker” from 8 to 10:30 p.m. (and repeating Saturday and Sunday and 10 more times through Dec. 31) at the Somerville Theatre, 55 Davis Square. General admission is $30. Information is here.

Kendall Square Holiday on Ice from 11 a.m. to 6 p.m. at Community Ice Skating at Kendall Square, 300 Athenaeum St. Free. Community Ice Skating launches its season with a day of free admission (skate rentals are at their regular rates) and a 2 p.m. skating performance featuring original numbers, local and international competitors and world-class professional skaters, who traditionally stick around to skate with fans afterward. Information is here.

Illuminations tours of Christmas lights from 4:30 to 10 p.m. starting from Somerville City Hall, 89 Highland Ave., Somerville. General admission is $15. Cambridge Christmas lights? Not so much. But Somerville? Worth the 45-minute trolley trip from City Hall, especially sweetened by the coffee, hot chocolate and cookies that lead off. Sales are over, but there may be tickets sold at City Hall on the evening of the tour (cash or check only). Information is here.

MIT Women’s Chorale: Winter Concert from 5 to 6 p.m. at the Harvard-Epworth United Methodist Church, 1555 Massachusetts Ave., Harvard Square. Free. A choral standard, Benjamin Britten’s “A Ceremony of Carols” (performed with harp) is the star of this show under the baton of new music director Daniel Mahoney, with the music of Kodaly, Stroope, Elder and Katz coming along. A reception follows. Information is here.

Old School Game Show Holiday Special from 8 to 11:30 p.m. at Oberon, 2 Arrow St., Harvard Square. Tickets are $20 to $25. A live, interactive theatre experience in the style of a 1970s television game show, with audience members able to play and win prizes. Information is here.

GeekFaire from noon to 5 p.m. at Pandemonium Books & Games, 4 Pleasant St., Central Square. Free to enter. Local geeky artists, writers and crafty peoples of all sorts set up to sell gift-worthy stuff, with buyers earning 5 percent stackable discounts on Pandemonium’s own stuff, which means up to 20 percent off store goods bought that day. Information is here.

“The Mind Has Legs” play reading from 2:30 to 4:30 p.m. at the Cambridge Main Library, 449 Broadway, Mid-Cambridge. Free. A middle-aged, paraplegic man and a young, suicidal woman become friends in a play by Vicki Meagher of Nashua, New Hampshire, and Albuquerque, New Mexico, presented by Playwrights’ Platform. Information is here.

Weekend matinee: “Three Wishes for Cinderella” from 4 to 5:30 p.m. at the Harvard Film Archive at The Carpenter Center, 24 Quincy St., Harvard Square. Tickets are $5 cash, or free with a current Cambridge Public Library card, and available starting at 2:15 p.m. outside the screening room. A beloved Czech holiday film from 1973 that’s often referred to as the European “It’s a Wonderful Life” – with a Cinderella that’s way more feminist than the one most Americans grew up with. Information is here.

Duke Ellington “Sacred Symphony” from 4 to 5:30 p.m. at the Massachusetts Institute of Technology’s Kresge Auditorium, 48 Massachusetts Ave. General admission is $25 or or pay as you are able. The Cambridge Community Chorus accompanies the Ellington standard with Ariel Ramirez’s “Navidad Nuestra” in this concert with the White Heat Swing Orchestra, including soloists and tap dancers. Eric Jackson of WGBH introduces the works. Information is here.

“Edward Scissorhands” from 7 to 8:30 p.m. at the Harvard Film Archive at The Carpenter Center, 24 Quincy St., Harvard Square. Free. Johnny Depp broke out of his “21 Jump Street” TV persona to inhabit the sweet, sensitive manufactured man of Tim Burton’s fable, in which he’s discovered in a gothic castle and goes about upsetting the homogenized, automated equilibrium of a fifties-esque, candy-colored suburbia. Information is here.