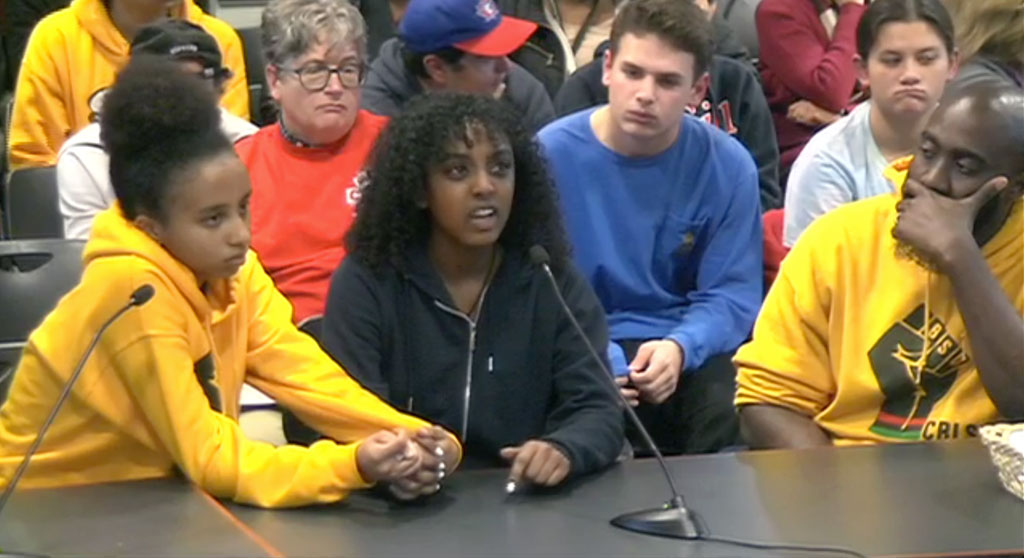 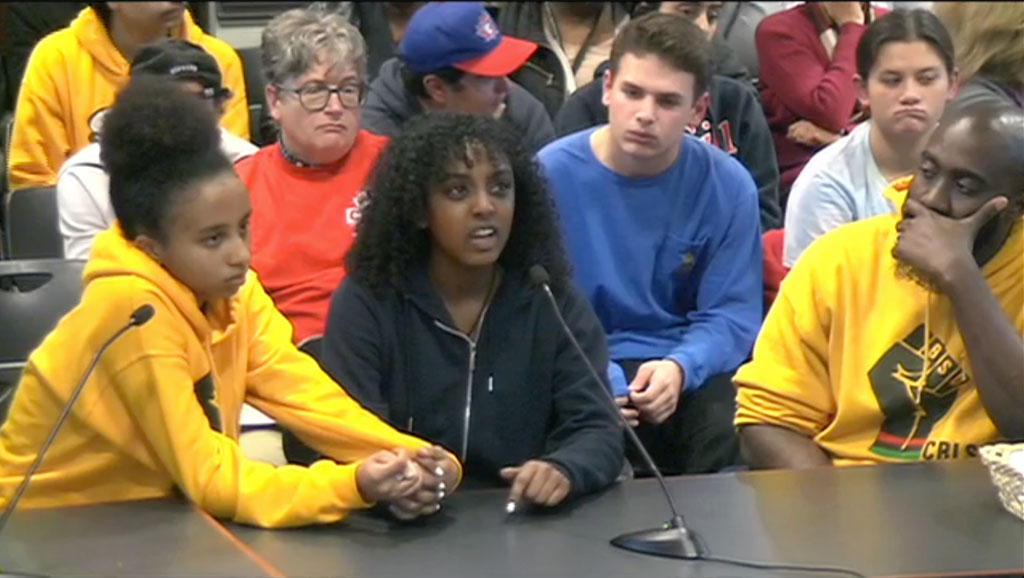 A student speaks with passion during a Tuesday meeting of the School Committee. At right in a screen capture from Cambridge Educational Access is Cambridge Rindge and Latin School history teacher Kevin Dua.

The School Committee rejected a report Tuesday on the use of the “N-word” during a high school classroom discussion in January, but only after well over three hours of public comment that ranged widely over a variety of race issues in which black students said they didn’t feel safe at school.

The report itself came in for intense criticism over the course of a meeting that was almost wholly public comment. Several speakers called it essentially a cover-up that glossed over the actions of committee member Emily Dexter – who is white and used the full “N-word” academically in a classroom panel discussion Jan. 10 – and inaction of administrators afterward. Instead, they said, it was used to attack the Cambridge Rindge and Latin School teacher who led the discussion, history teacher Kevin Dua.

Six of seven members voted to reject the report and place it on file, with Emily Dexter voting “present,” saying it would be inappropriate for her to vote because she was included in it.

“I take this very seriously. I have listened very carefully tonight and I continue to apologize,” Dexter said.

Addressing how the report came to be, Mayor Marc McGovern told the standing-room-only crowd that, like other government bodies throughout the city and unlike the government bodies that could be seen on television holding impeachment hearings, the committee lacked processes to examine such incidents. The city would have to correct that, he said.

Member Manikka Bowman, who called for the investigation that became the rejected report, vowed that the issue would not be put to rest, and that the next term would start with her making a motion to provide three incoming members with unredacted materials not available to them as members of the public. She would act to restart the look into what happened in January, she suggested.

“We’re at a space where we have to figure out what is next,” Bowman said. “That is how I hope we leave this space – leaning into the facts, taking ownership and accountability not just from saying ‘I’m sorry’ because it’s deeper than the words of ‘I’m sorry,’ before we then move to the place of reconciliation.”

The class panel discussion held 11 months ago was about language – “Reclaiming: [N-word] vs. Cracker: Educating Racial Context in/for Cambridge” – and explored “how the power of racial language has shaped the nation.”

On Tuesday, how words can be weaponized and who wields them remained the central issue as teachers from CRLS and other Cambridge schools; Cambridge Education Association members in red shirts and buttons; and students, some wearing yellow Black Student Union hoodies, testified to the impact the incident and officials’ response have had on the community.

Young voices were central, with many students speaking in a public forum for the first time. Many described a culture of white supremacy at the school, where nonwhite students are punished for behavior that white students are not.

Many called Dua is a source of inspiration and support, particularly members of the Black Students Union, which Dua advises. BSU members said they were ostracized and felt isolated and afraid for their safety as the controversy continues, and that they find refuge in Dua’s classroom.

Three students who spoke were part of Dua’s history class last fall, and described how their project – to explore why software on school Chromebooks filters certain words, and to explore the history and impact of two specific words – “was completely ripped out of student hands and the focus, which was the power of words and the meaning of them, was redirected to our teacher.”

“All we have is Dua”

They said their support for Dua has led to being called “crybabies” and other names, and that the school is not a safe place for students and teachers of color.

“This hoodie? You know what this means?” said Reham Zeroual, a BSU co-president. “We’re tarnished, we’re stigmatized. If you continue with this report then you’re proving that you’d rather protect yourself than your students and the one black teacher we’d all literally die for.”

“I’ve been in the BSU for going on three years, I can say for all of us is that we are isolated, you have left us alone,” she continued. “All we have is Dua now … you don’t know how to handle blackness. If [a teacher] is not pro-black, then get them out.”

One student asked “How are you going to protect us tomorrow? Because there are some crazy teachers there. We did nothing wrong tonight.”

One student said, “I think that Cambridge had a huge opportunity to teach and display how they combat situations such as these, but they lost it completely by not only pinning this entire incident on Mr. Dua but refusing to take responsibility for the mistakes that were made.”

Students were universally critical of Dexter, several accusing her of being racist and demanding that she resign.

One Youth Council member said that although Dexter was reelected this fall, she was the only one of three incumbents to lose her seat in a CRLS mock election, and was not elected by students whose interests she represents.

Teachers and students referred to the personal toll that the situation has had on Dua over the past year.

“Mr. Dua is undeniably one of the best educators that I’ve had the opportunity to work with,” said Jennessa Burks, a fourth-grade teacher at the Haggerty School, adding that his “contagious spark for education” has dwindled over the past 11 months as he’s waited for the report to be made public.

Dua made a statement midway through the meeting, thanking the BSU members, students, teachers and community for their support, and attesting to the toll the situation has taken. Dua said that while he is not resigning, he is unsure of his future in Cambridge or in teaching.

“I have read that report more times than I have lesson-planned or graded anything this semester. I have obsessively been waiting for this to try to figure out what would happen,” Dua said. “This report, this entire process has broken me … I’m genuinely telling you all, I don’t know if I can make it anymore.”

“I can’t retain my mentality anymore, it is done,” Dua said.

Three committee members-elect, who will take their seats in January, said while they have only the information provided in the redacted report, they shared a sense of urgency to begin the healing process for students who suffered harm from the incident, and added that this is not how they imagined beginning their tenure.

“It’s appalling that the investigation of Ms. Dexter’s actions morphed into an examination of Mr. Dua’s actions,” said Sue Mapel, assistant principal at the Haggerty elementary school. “No one is responsible for that comment but her, turning that comment to Mr. Dua is abhorrent and unacceptable.”

“[White supremacy] is a set of norms and practices like defensiveness, power hoarding and either/or thinking. It’s how the dominant culture defines reality and it serves to give advantage to white folks while oppressing people of color,” said Matthew Dunkel, math coach at Vassal Lane Upper School. “I don’t think any of us understand the closed-door process through which this report came into the world – but we see its impact.”

“This investigation from my vantage point was a waste of taxpayer money and was intended to blame Dua and his students, especially his students of color, for a white person’s actions,” said Beatriz Thomas, a social studies teacher at Rindge Upper Avenue School.

The report “should never have existed,” said Adaline Lining, an aide at VLUS. “Now that it’s here, the only option for those who are committed to listening and acting in response to educator voices … is to reject the report and commit to taking a restorative justice to remedy that has been done.”

“The fact that those were harmed were overlooked is yet another example of white supremacy culture,” said Cambridge Education Association president Dan Monahan, reading the union’s prepared statement. “Who determined exactly which questions to ask … was this truly an independent review?”

A voice in support

Jon Baring-Gould, an art teacher at the high school, offered the sole dissent during the discussion.

“I believe Emily Dexter attended the discussion on ‘reclaiming the N-word’ in order to defuse the power and effect this word has,” said Baring-Gould, adding that he disagrees with the teachers’ union conclusion that the report is an example of the culture of white supremacy, and that it is an investigation of a teacher whose actions may have warranted it. “I do agree with the CEA’s claim that [the report] does not hold administrators accountable for their lack of action.”

Baring-Gould said many of his colleagues are afraid of a backlash if they express their opinion: “I am worried that because I am showing my support here, I will be targeted. A colleague gave me this shirt to wear, with a literal target on my back, for my belief in saying what I feel needs to be said.”

Baring-Gould’s reference to the target on his shirt was later disparaged by several speakers, who expressed disbelief that a white man would perceive himself as a target when people of color are subjected to constant cultural marginalization.

Jo Quest-Neubert, a literacy interventionist at Putnam Avenue Upper School, summed up her hopes: “The role of the committee in this situation should be to identify and push for sufficient response and continue pushing until victims feel meaningful resolution. How can you step back, assess and move forward in the direction of healing so that we can all get back to the critical work of making our schools and system a place of learning, growth and liberation for everyone?”

This post was updated Dec. 12, 2019, with more details and community voices.