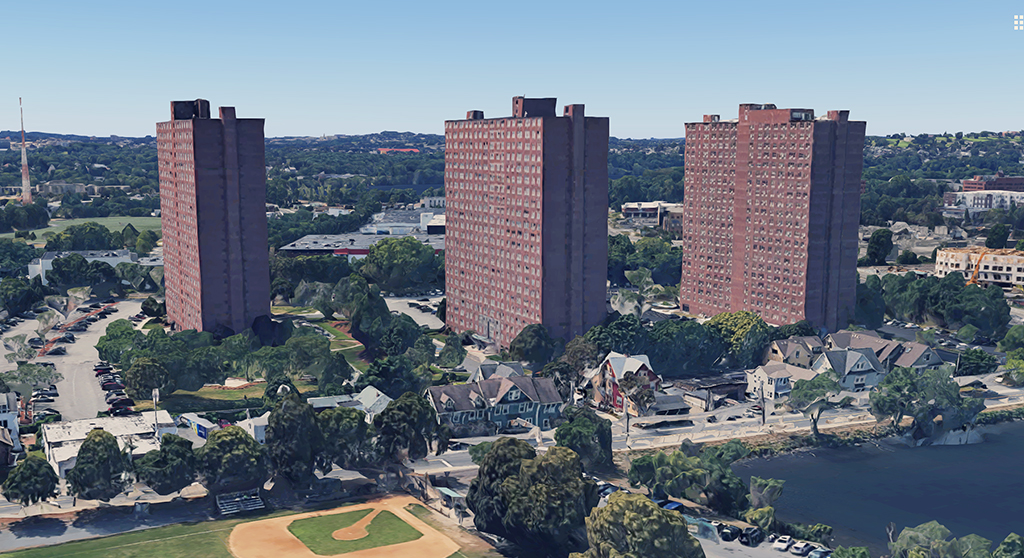 By Ursula Murray-Bozeman and Marc Levy 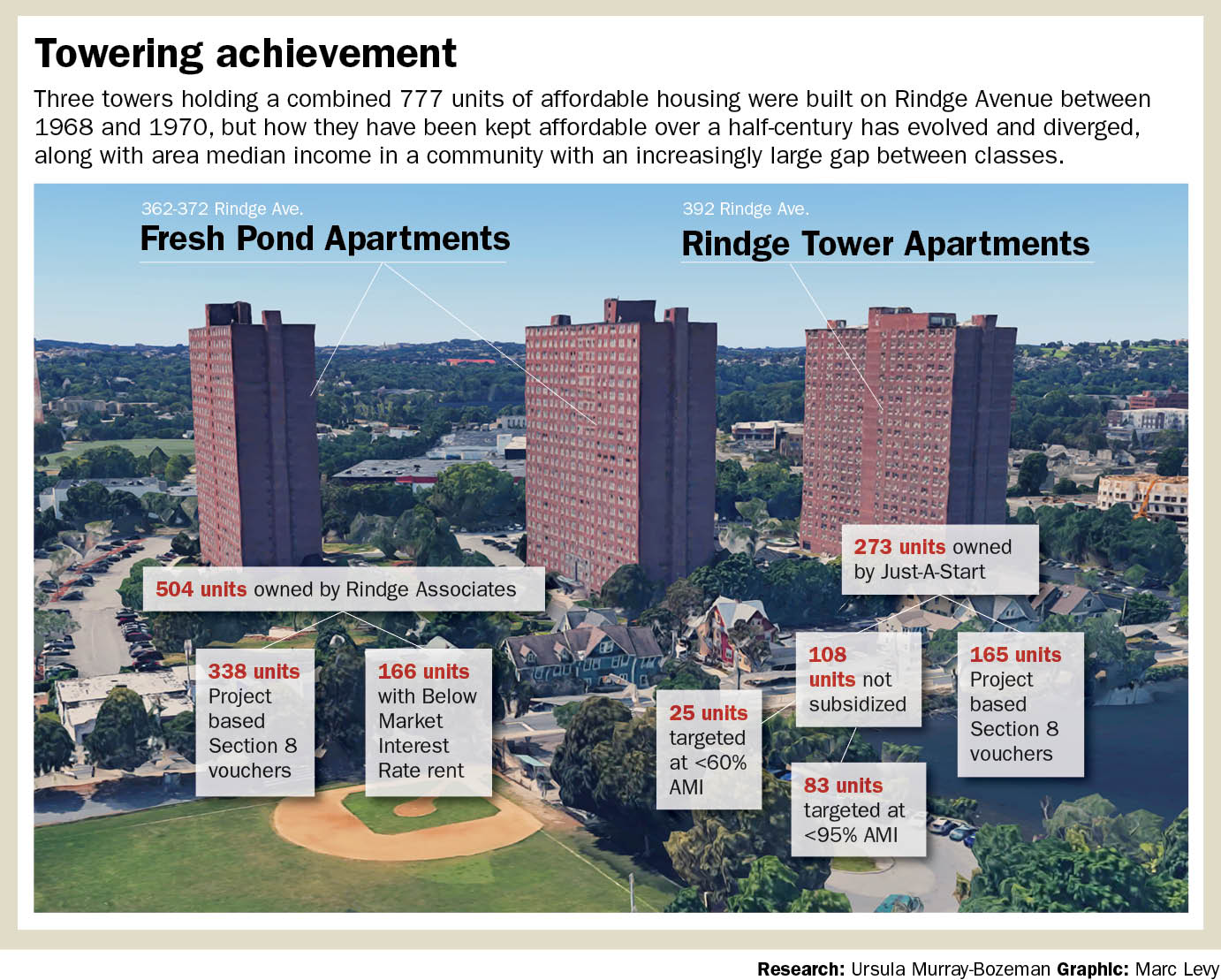 The city set aside $15 million Monday to preserve homes for lower-income residents on Rindge Avenue, where Cambridge was at risk of losing 6 percent of its affordable housing when federal affordability agreements expired Dec. 31. That would have taken 504 units in the two towers of the Fresh Pond Apartments out of reach for low-income residents and sent an estimated 1,159 people off in search of new homes in an already vise-tight housing market.

The transfer of money out of free cash to the Affordable Housing Trust relieved residents of a lot of “anxiety and fear,” said Tina Alu, executive director of the Cambridge Economic Opportunity Council, echoed by her predecessor, trust member Elaine DeRosa: “With this beginning investment, [these] tenants don’t have to worry about where they’re going to live next year.”

Both also lauded city leaders for setting aside the money, the ninth time money has been disbursed to save expiring-use affordable units in the city. “This is an ongoing effort that does not happen in other communities,” Alu said. “This is success no other city can match.” 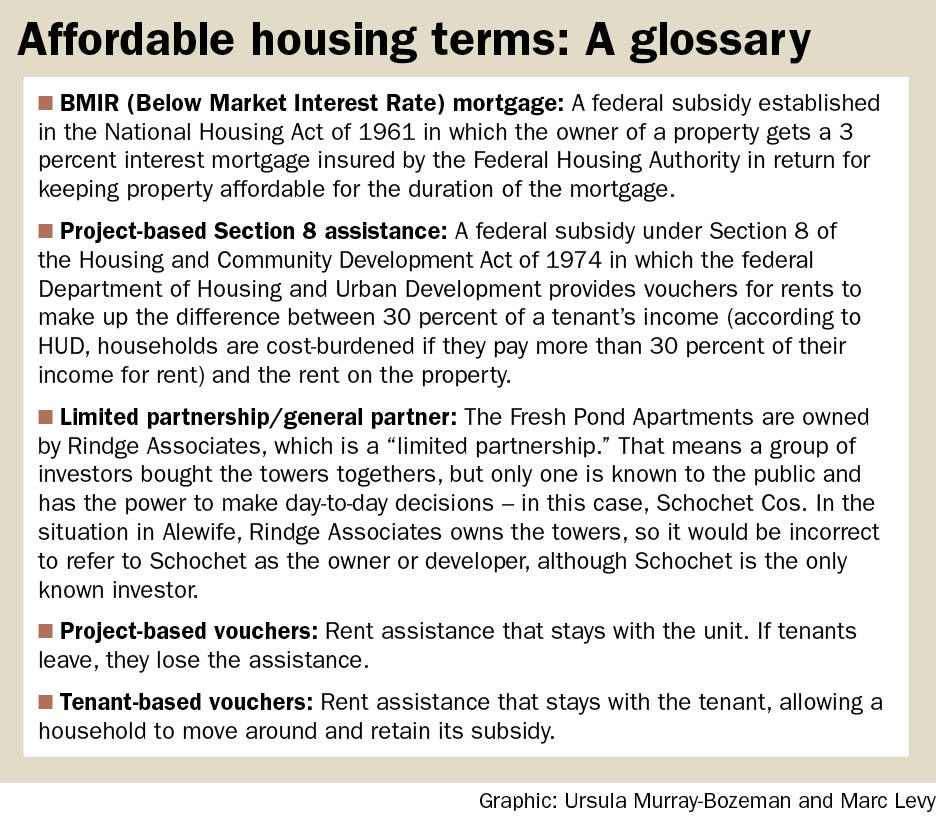 The $15 million is part of a total $40 million targeted to keeping units from expiring at the Fresh Pond Apartments, which stand next to other affordable units in a third building called the Rindge Tower Apartments. It directly preserves 166 units for 50 years, with the city money presented to the owner as a low-interest loan for which affordability is preserved as the funds are used. “We don’t really want repayment,” said Chris Cotter, the city’s housing director, “we just want … the affordability commitment.”

The buildings units, all expiring at the new year, are a mix – some identified as being “below market interest rate,” which people refer to as “beemers,” a federal program that has ended since it was put in place on Rindge Avenue; the remainder are preserved by the federal government’s ongoing Section 8 voucher program. (Section 8 voucher use agreements are renewed only 20 years at a time.) While the owner could negotiate with the government for renewing the Section 8 apartments, and an agreement is expected shortly, no such talks could take place for the BMIR units, which is why the city stepped in.

Rents will go up slightly in those units where rates aren’t tied to income and have slipped below the 30 percent income formula applied to Section 8 vouchers. But is not clear by how much, Cotter said. The Affordable Housing Trust will use up to $5 million for a phase-in period to higher rents.

Recent city efforts to save the units were led by Mayor Sumbul Siddiqui, starting last term when she was a city councillor. On Monday, she called the roll call approving money for affordable units on Rindge Avenue – where she grew up – “probably the most important vote I’ve taken.”

The owner of two towers on Rindge Avenue said he intended to keep the towers affordable as long as the U.S. Department of Housing and Urban Development continued to provide assistance, but residents and city officials had worried that Republican-led politics in Washington would lead to reduced funding for affordable housing, putting developments with expiring use agreements at risk.

City Manager Louis A. DePasquale said the expenditure was made possible by managing finances to build up immense cash reserves, which won Cambridge its latest bond-rating trifecta: top scores from three credit rating agencies, announced Monday in a ritual held every year since 1999.

The expenditure of $15 million from so-called “free cash” was also part of a total $35.3 million put into affordable housing from municipal funds just in 2020, councillor Marc McGovern noted, with other money coming from the Community Preservation Act, building permit revenue and property taxes.

The three brick towers have been a landmark in Fresh Pond since construction in the 1960s – they rise 22 stories above the surrounding residential homes and stand in contrast with new luxury developments dominating Rindge Avenue and its adjacent streets across Fresh Pond Parkway. The construction of all three towers were subsidized under the same HUD program, but when two were sold to Rindge Associates, the change in funding sources brought agreements that would be updated at different times. The third tower remained with Max Wasserman, one of Cambridge’s largest real estate holders at the time, until 1996, when it was sold to the real estate nonprofit Just-A-Start. The use agreement on Just-A-Start’s tower and its 252 units will expire in 2035, a decade and a half away.

Rindge Associates, owner of the Fresh Pond Apartments, is a limited partnership made up of investors; decisions affecting the property are made by Schochet Cos., the general partner.

The use agreement on the Fresh Pond Apartments has already been extended twice. HUD’s New England office and Mass Housing, an organization that manages some of of the agency’s assets in the state, praised Schochet’s commitment to affordability. “We couldn’t ask for a better borrower,” said David Keene, the director of preservation at Mass Housing.

HUD’s policy was to offer to renew the same contract for another 20 years, Keene said, which would keep Fresh Pond Apartments units affordable until at least until 2040. The municipal money announced Monday sticks to the 20-year schedule.

Rhonda Siciliano, the public affairs officer for HUD’s New England Region, confirmed in 2017, not long after a Republican administration settled in, that “Given the high cost of housing in New England, preserving the affordable housing stock currently in place is important to HUD, and that is [why] we work with owners like Schochet to encourage them to keep their properties as affordable.” Although she supported the spirit of Keene’s claim, she did not directly confirm that current policy ensures a contract renewal. When pressed on the likelihood of the policy changing, she replied, “It is common to have changes in priorities from one administration to the next.”

Patricia Cosola, the head of the Fresh Pond Tenants Association, said at the time she was doubtful preserving the affordability of her home would be as easy as Schochet and city officials seem to suggest. In a series of interviews held in her tiny apartment, she expressed her mistrust of the City Council and her frustration with policies that, as she sees it, consistently disempower lower-income citizens. “I’m a realistic woman,” she said, and for her, realism means skepticism about the intentions and ability of those trying to preserve the towers.

That attitude has been productive in the past, she said. In 2000, with a new contract being drawn up, the tenants association lobbied to add clauses preventing Schochet from underutilizing the Section 8 contract – that is, renting fewer than 338 units to Section 8 eligible households, effectively letting some vouchers go unused. Cosola claimed that it was being underutilized by 150 out of the 338 units.

Henken admitted in an email exchange that the contract had been underutilized, though he believed 150 units “sounds too high.”

Underutilizing a Section 8 contract is not illegal, according to Siciliano. “However,” she wrote in an email exchange, “HUD’s position is that all units under contract be utilized to the maximum extent practicable.”