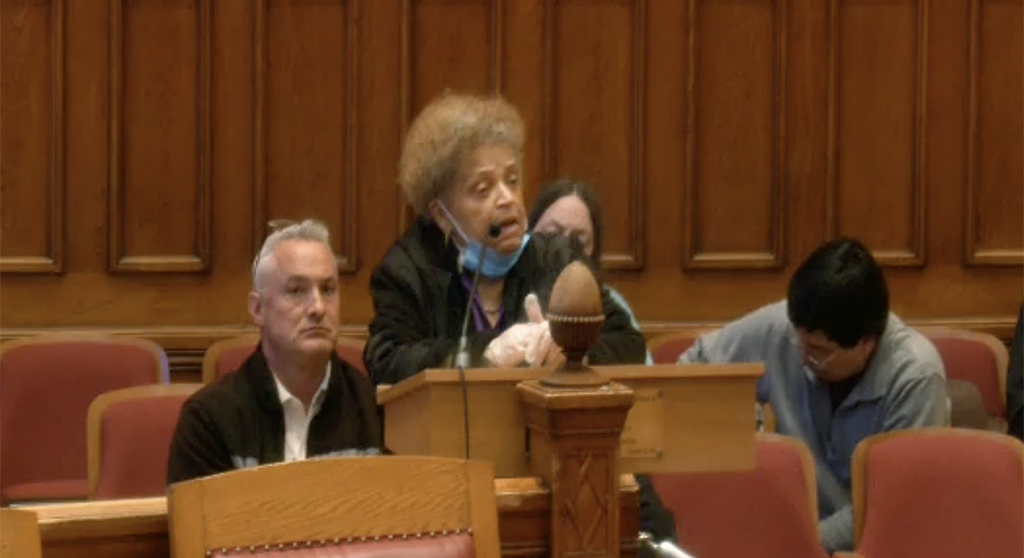 Saundra Graham speaks Thursday at a City Council committee hearing, having pushed aside a mask. At least one other speaker wore latex gloves.

School is also canceled for two weeks starting Monday, Superintendent Kenneth Salim announced at around the same time, at the start of a School Committee meeting.

Salim noted the hardship schools closing will cause for families financially and with the loss of access to supervision and education for their children, but said the district is working with the city and other partners to implement processes to provide breakfast and lunch to support families while the schools are closed.

The duration of the closing will be reevaluated as the situation develops. Additional information for parents, school staff, and central-based staff will be provided shortly, Salim said.

While all meetings of the city’s public bodies, boards and commissions governed by the state Open Meeting Law that “transact official city business or approve permits, licenses or other approvals pursuant to federal, state or local laws” will continue to meet and be open to the public in accordance with the requirements of the law, they said, all city-sponsored community events, athletic events, events permitted for the use of city parks or other city-sponsored public gatherings will be canceled or postponed.

“No approvals for events or gatherings requiring a permit from the City of Cambridge’s Special Events Committee will be approved, and all prior approvals for such events have been revoked,” according to a 6 p.m. email.

City officials have been monitoring and coordinating their coronavirus response in a “rapidly evolving situation [that] is extremely stressful,” as well as working with regional municipal partners and state agencies, DePasquale said.

“We are working around the clock … an event as unprecedented as this will test us all. I’m confident we will rise to the occasion, as our community has done before in difficult times,” Siddiqui said.

The announcement came during a meeting of the Government Operations, Rules & Claims Committee, which continued talks on extending DePasquale’s contract as city manager beyond January – and at which citizens came to speak at a lectern while wearing latex gloves to guard against spread of the virus, or pushing masks aside to speak.