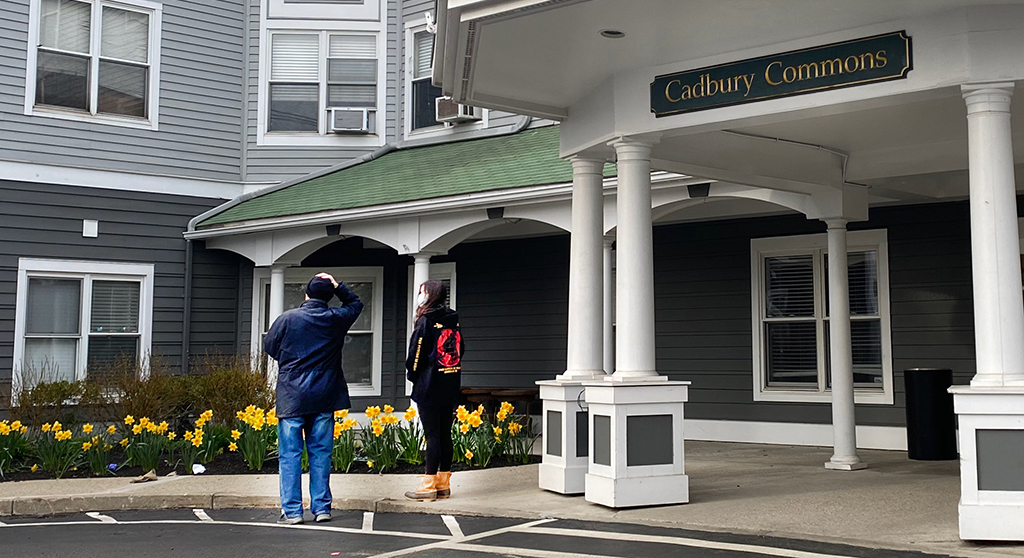 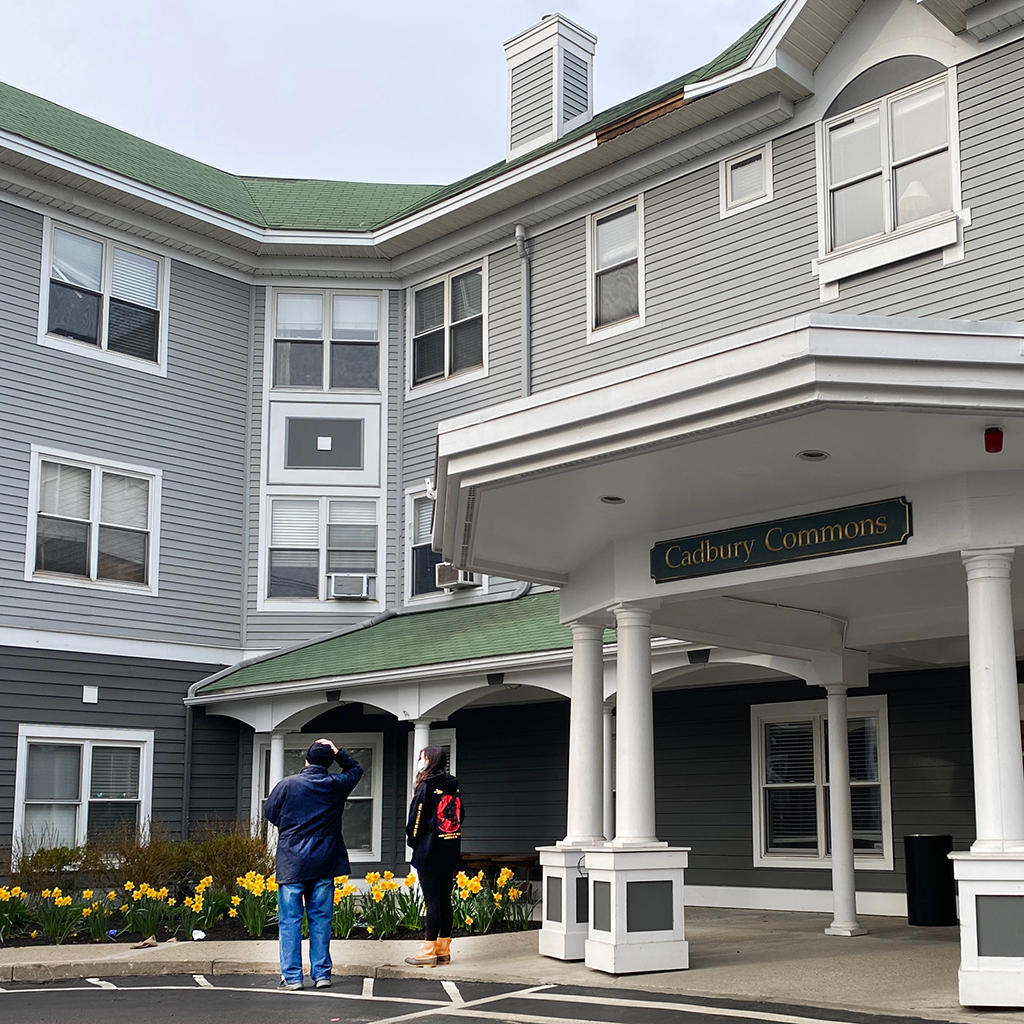 Visitors to Cadbury Commons, a senior living facility in Neighborhood 9, communicate with a resident inside on Friday. (Photo: Marc Levy)

Evidence is mounting that one or more Cambridge long-term care centers are coping with a serious outbreak of Covid-19 among residents, yet the city’s public health department and most of the facilities have been silent. 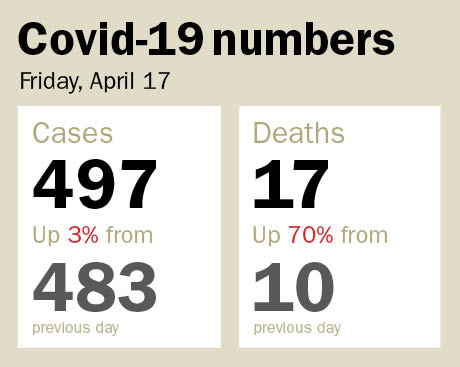 Two of the seven centers, The Cambridge Homes and Neville Place at Fresh Pond, assisted living facilities managed by the same company, have no cases of the virus among residents, the marketing director for the company said Friday. (Two employees at Neville Place were infected, director of marketing and technology Pam Maloney said). That leaves five facilities with a total of 172 residents testing positive as of Friday, according to the city’s latest update of cases.

Besides that, total deaths from the virus jumped to 17 Friday from 10 the day before. Although the city does not say where deaths occur, people in long-term care facilities, particularly nursing homes where residents don’t have their own apartments, are especially vulnerable to the virus because of their age and poor health. At least six of the deaths in Cambridge were residents of long-term care centers, according to a previous city disclosure. Time and time again, Covid-19 has mowed down nursing home residents nationwide after invading a facility.

A Cambridge Day reporter called all the long-term care facilities on Friday. No one except Senior Living Residences, the management company for Neville Place and The Cambridge Homes, called back. But a recorded message at Sancta Maria Nursing Facility said there were cases there, and the executive director of Cadbury Commons assisted living told The Boston Globe that the facility had infections. There was no response from Cambridge Rehabilitation and Nursing Center, Youville House assisted living or Neville Center, a nursing home.

Outside the long-term care centers, 325 residents have tested positive as of Friday, up from 312 on Thursday. The total number of cases in the city rose to 497 on Friday from 483 on Thursday.

Much of the information about cases in nursing homes and assisted living centers came from a groundbreaking testing program by Pro EMS, the city and the Broad Institute of Harvard and the Massachusetts Institute of Technology. Every resident and worker was tested starting April 9 regardless of whether they had symptoms of Covid-19. Results from the first round, announced Monday, showed that an astonishing 203 residents and workers were infected; before the testing program, the city knew of only 48 cases. According to Broad, 1,050 people were tested.

The city disclosed Monday that 169 of those who tested positive were residents, which leaves 34 workers. Since then, the city has not reported results among employees separately, and the health department says it won’t disclose those cases unless the worker lives in Cambridge. The number of cases among long-term care residents inched up to 172 as of Friday. A second round of testing by Broad began Friday. Cambridge Public Health Department spokeswoman Susan Feinberg didn’t respond when asked whether those results will be made public as the department did for the first round.

The health department began posting more demographic information about those infected on Friday, and it shows why residents in long-term care centers are more vulnerable than the general population in Cambridge. An overwhelming proportion of people in nursing homes and assisted living centers who are infected – 83 percent – are 70 and older. Outside the facilities, that share is only 15.4 percent.

The state offers help to nursing homes coping with an outbreak. Federal and state guidelines call for separating nursing home residents who are infected from those who aren’t; the recorded message at Sancta Maria warned families that their relatives might be moved without notice.

At Neville Place, the assisted living center with no current infections among residents, one resident tested positive before the Broad Institute testing program and was hospitalized, according to a letter from executive director Alan Lappas to residents and families dated April 6.

In a Monday letter reporting the Broad’s first-round test results, Lappas said the two workers who tested positive had no symptoms and were no longer in the building. The Cambridge Homes had no infections among its staff. Both letters were provided to Cambridge Day by the management company.