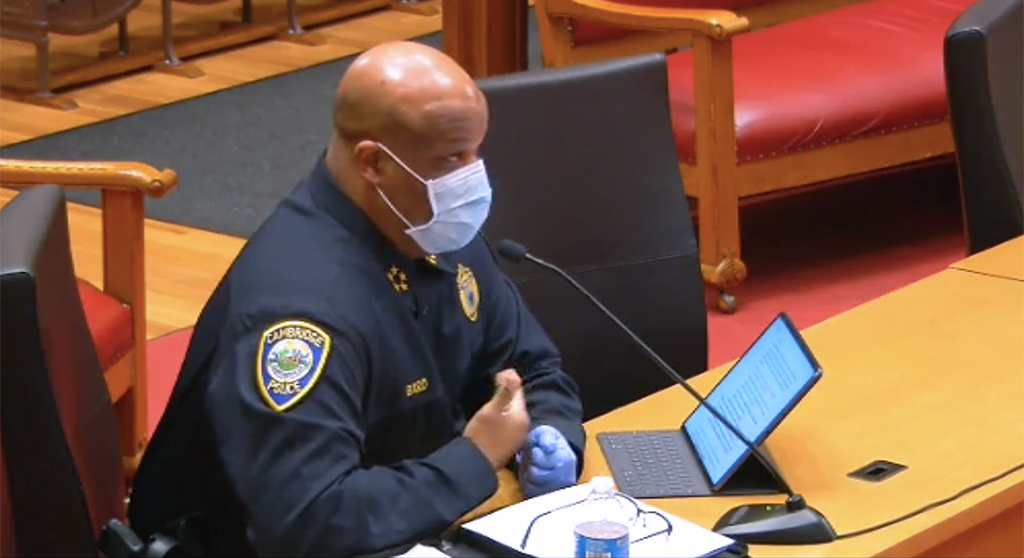 A $300 fine will be a “last resort” too used by police dealing with someone not wearing a mask under a new city order, says police commissioner Branville G. Bard Jr. He is seen at an April 21 meeting.

Not enough residents are wearing masks to prevent the spread of the coronavirus, so the city is making them mandatory, City Manager Louis A. DePasquale said Monday.

Mask will be required as of Wednesday for people 5 and older in public places, businesses and in the common areas of buildings with two or more units, according to guidance offered by the city. There may be $300 fines “for those who willingly refuse to comply,” with a one-week grace period so people can adjust to the order. (The grace period is mentioned in a city press release but not in the underlying city order, and that order also contradicts the press release by setting the cutoff age limit at 4 years.)

Update on April 28, 2020: The city posted an amended order noting Gov. Charlie Baker has extended through May 18 a statewide shutdown of nonessential businesses, as well as clarifying that: in common areas of residential buildings of two or more units, people can either wear a mask or stay 6 feet away from others (unless caring for a child or for a disabled or elderly person); and that maintaining a 6-foot distance “from all people at all times” in a business makes wearing a mask unnecessary. The amended order also fixed the inconsistencies between the city order and press release.

“I don’t want to point any groups out, but clearly the amount of people who are running and bicycling through the city without masks, it was our determination that the time has come,” DePasquale said.

The implementation closely matches one ordered several hours earlier by Somerville Mayor Curtatone, except that Somerville’s mask order is for everyone down to the age of 2.

“We thought … the right strategy was to issue an advisory strongly urging the wearing of face coverings,” DePasquale said, referring to debate about masks dating back to early April. A reverse-911 system was used to ask people to wear masks, and the city said trucks with loudspeakers were sent out to share the message too. “We have observed public behavior in compliance with the advisory and now feel it is time to make wearing masks or face coverings mandatory.”

DePasquale said the decision was made in discussion with the city’s public health advisers, Mayor Sumbul Siddiqui and councillor Marc McGovern, who had an order on the evening’s agenda urging the city manager to move toward requiring residents to wear masks. By the time the order finally came up officially during the 5.5-hour meeting, it was unnecessary because of DePasquale’s announcement; the council opted to place the order on file “in case we need to go back and revisit it,” McGovern said.

Throughout the Covid-19 crisis, officials have cited the consultation and example of other communities when it suits them and gone their own way when it doesn’t. “I’m on a Metro Mayors call probably 10 times a week,” DePasquale said Monday in explaining his decision, including a key call that happened over the weekend. The Metropolitan Mayors Coalition was formed in 2001 among the cities and towns of Cambridge, Somerville, Arlington, Boston, Braintree, Brookline, Chelsea, Everett, Malden, Medford, Melrose, Newton, Quincy, Revere and Winthrop.

So councillor Patty Nolan was curious about a distinction she saw in Cambridge’s approach, not just from other nearby communities, but from the guidance of the federal Centers for Disease Control and Prevention.

“All of the advice from the CDC, from other cities in Massachusetts including Salem, Brookline and Everett, is all about mandating masks and face coverings in public when you cannot socially distance,” Nolan said. “It sounds like this order goes another step, not just when social distancing measures are hard to maintain and not just outside.”

“Outdoor, episodic exposure does not lead to transmission,” Nolan said. “I worry that by focusing on outdoors, we won’t be focusing on indoors, [and] I worry that we are needlessly scaring people.” She worried that people of color would be victimized by wearing masks under a “draconian” edict.

In responding, DePasquale echoed the message of Somerville’s Curtatone earlier in the day, saying there wouldn’t be fines in the first week, and that fines were not the intent. “If warnings for some reason continue not to work, we will take a look,” DePasquale said. “We’re not looking to write tickets.”

Police commissioner Branville G. Bard Jr. called the $300 fine a tool that could be used by officers at their discretion, but as a “rare … last resort.”

But outdoor transmission couldn’t be ruled out, and he needed to err on the side of caution, he said, especially because Cambridge was believed to be at a peak of coronavirus infections.

The officials didn’t quite get around to answering all of McGovern’s concerns from April 21, when he planned to ask for a study of masks rather than make an immediate demand that people wear them: “Do we want our police department to get 200 phone calls saying ‘Hey, there’s somebody on Franklin Street not wearing a mask’? And then what do they do with that information? Chase the person down? What happens when they find them? Is there a ticket involved, a warning? If we’re going to mandate masks, how do we ensure everybody has them?” McGovern asked at the time.

The emergency mask order doesn’t apply to “anyone who has trouble breathing” or is unconscious, incapacitated or otherwise unable to remove a mask without help, or anyone else exempted by guidelines from the CDC or the state’s Department of Public Health.

But it is in effect “until further notice” or until the March 19 declaration of a state of emergency in the city is rescinded, according to the order signed by DePasquale and Assaad Sayah, the city’s commissioner of public health.