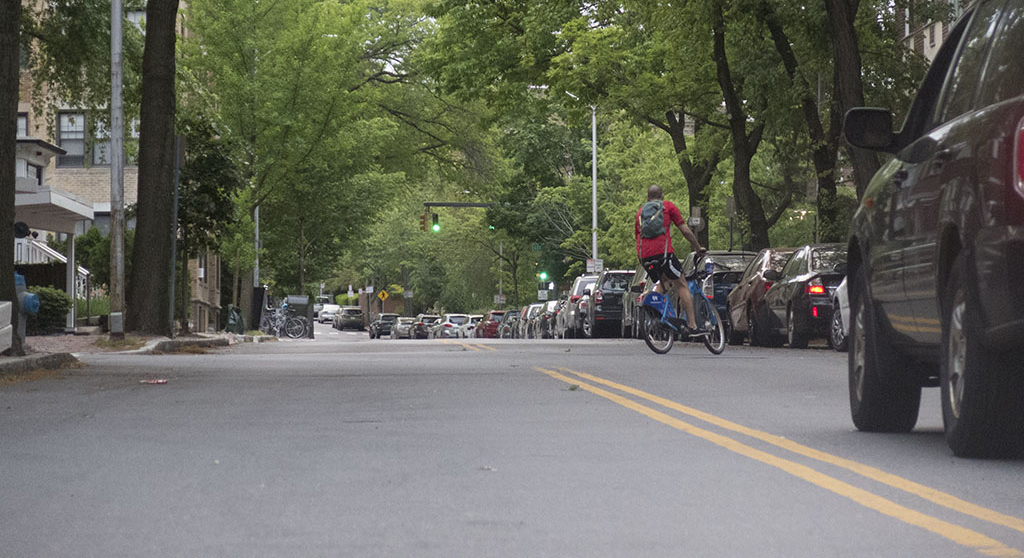 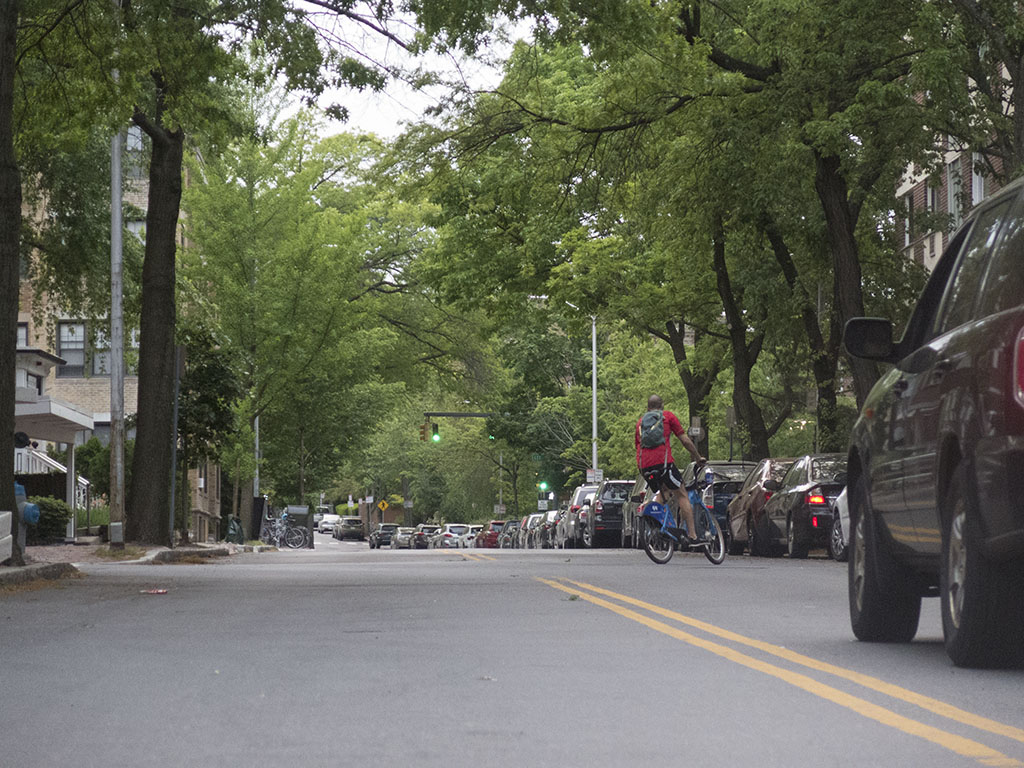 Harvard Street, shown in Mid-Cambridge, is set to close in June to regular traffic and become a “shared street.” (Photo: John Hawkinson)

Effective the week of June 15, Cambridge plans to close three streets to regular traffic at all hours, making them “shared streets” with reduced vehicular traffic intended for walking as well as use by cyclists.

Residents will still be able to access their driveways and delivery trucks will be permitted, both limited to 10 miles per hour.

“This is not like Memorial Drive where the street is closed completely,” city traffic director Joseph Barr said, “but rather more of a shared operation.” The move will last “indefinitely and as-needed” and comes after months of analysis by the traffic department. 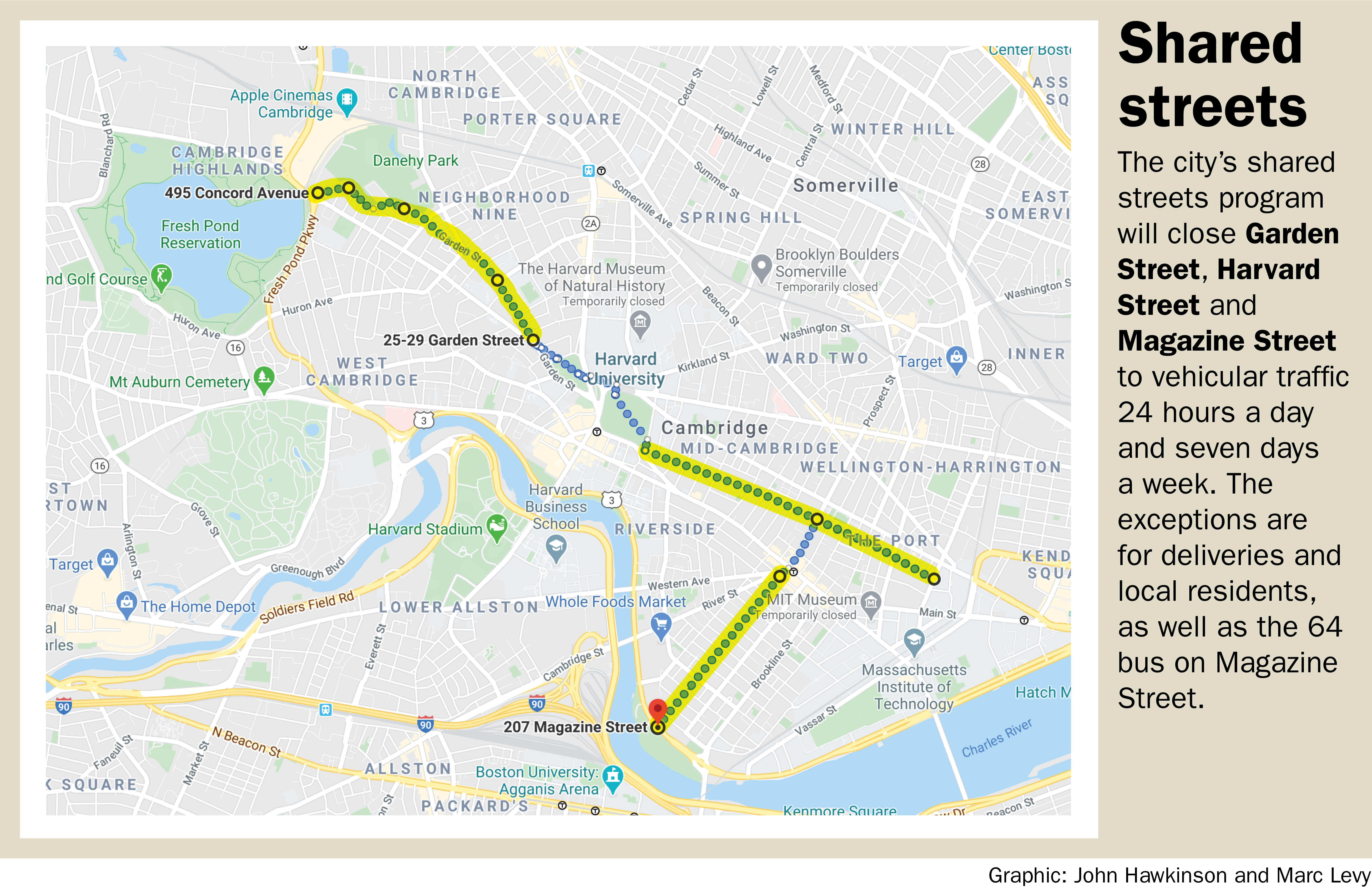 Barr announced the plan at a special meeting of the City Council on Thursday (video); he described the plan as moving “as aggressively as we can to repurpose our streets in a way that’s appropriate.”

The three streets are “connector streets” from Danehy Park and Fresh Pond in the northwest of the city, down to Magazine Beach in the southeast and the edge of Kendall Square to the east. They will be barricaded with signs at major intersections, but vehicles will be able to drive around the barricades where access is necessary. The city intends to have some sort of enforcement presence on the streets, City Manager Louie A. DePasquale said.

The streets, chosen from the city’s bicycle network plan, are:

Garden Street: Starting at the rotary on Concord Avenue at New Street, the city will close Bay State Road, Field Street and Garden Street until two blocks short of Cambridge Common. The closing ends in Arsenal Square, where Garden and Concord fork, but pedestrians and cyclists can jog left and take “Little Concord Avenue” to get to the Common, Barr said.

Harvard Street. – which parallels the Massachusetts Avenue and Broadway corridors – will close in its entirety from Quincy Street in Harvard Square down to Portland Street at Technology Square.

Magazine Street will close from Green Street in Central Square for nearly its full length to Memorial Drive. The MBTA’s 64 bus will continue to travel up Magazine from the Charles River to Central Square.

“Pretty much in lockstep”

The announcement comes more than two months after the city officially locked down for the pandemic on March 16. City councillor Patty Nolan first proposed closing streets to nonessential traffic on March 30, although the order was tabled by E. Denise Simmons and did not pass until April 27. Councillors Marc McGovern, Simmons and Tim Toomey voted against it.

Addressing the late start, “it’s important to recognize the situation in Massachusetts has been more intense than many other parts of the country,” Barr said. “Although we’re not necessarily doing this as early as some other cities around the county, we are pretty much in lockstep with our partners in the region,” he said, referring to Somerville and Boston.

Barr said the streets were chosen to connect as a citywide network to key city destinations, while acknowledging that they don’t actually connect. He offered that cyclists can cross Cambridge Common and go through Harvard Yard to connect the Garden and Harvard Street sections, and similarly can traverse Central Square. (Harvard University does not allow bicycles to be ridden through Harvard Yard, however.)

“The rollout of the Shared Street pilot will help us gain a deeper understanding of the long-term impacts Shared Streets can potentially have on our community and will provide additional outdoor space for our residents to utilize during the approaching summer months,” DePasquale said in a press release. 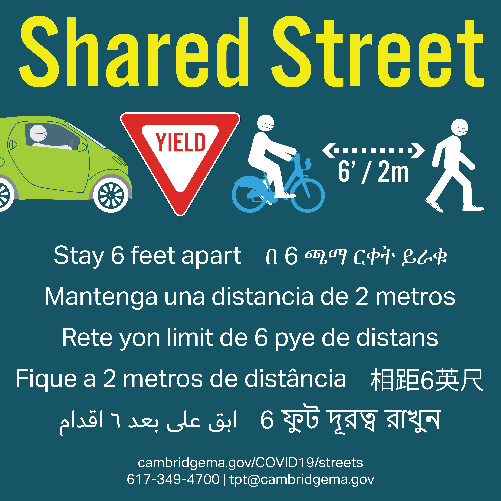 Barr said that the city is considering other street changes during the pandemic, including: an expansion of the shared street program to other streets in the city; expanding sidewalks into the street to allow more space on sidewalks and to permit sidewalk or street dining; reducing crowding at bus stops; and increasing bus reliability and efficiency, perhaps through bus lanes and bus priority signaling.

Barr and his staff are coordinating with counterparts in Somerville to ensure they are “not creating sort of weird changes at the border,” he said.

Although the Thursday meeting agenda had only tersely mentioned “Covid-19 updates,” Barr had indicated he would be discussing the plan during Tuesday’s budget hearings.

Part of the reason the shared streets are not happening until mid-June, Barr said, is the difficulty in procuring street barriers and signs, alluding to the nationwide shortage of masks and other personal protective equipment: “A lot of different places are doing the same things. Not quite in the same way as PPE, but somewhat similarly there’s a high demand for these all of a sudden.”