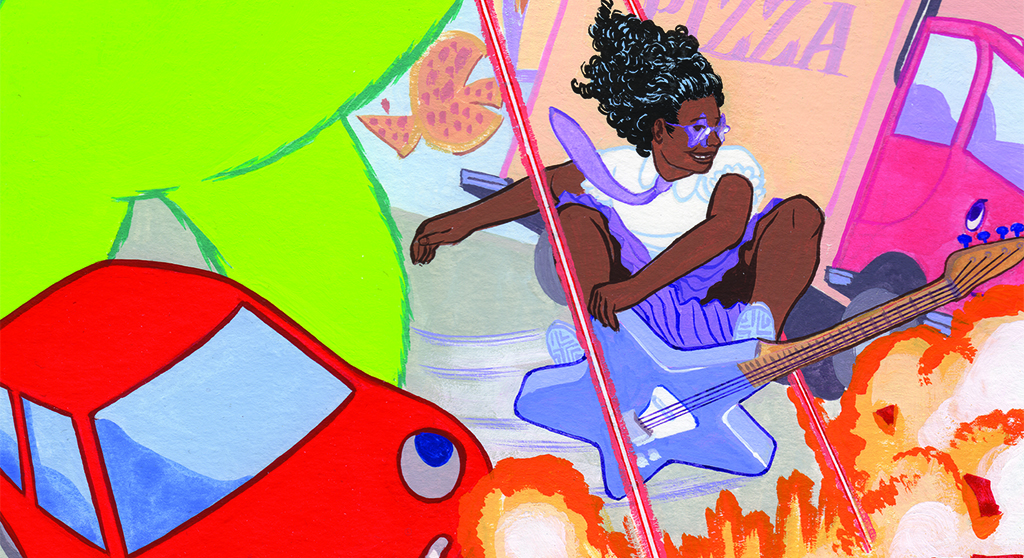 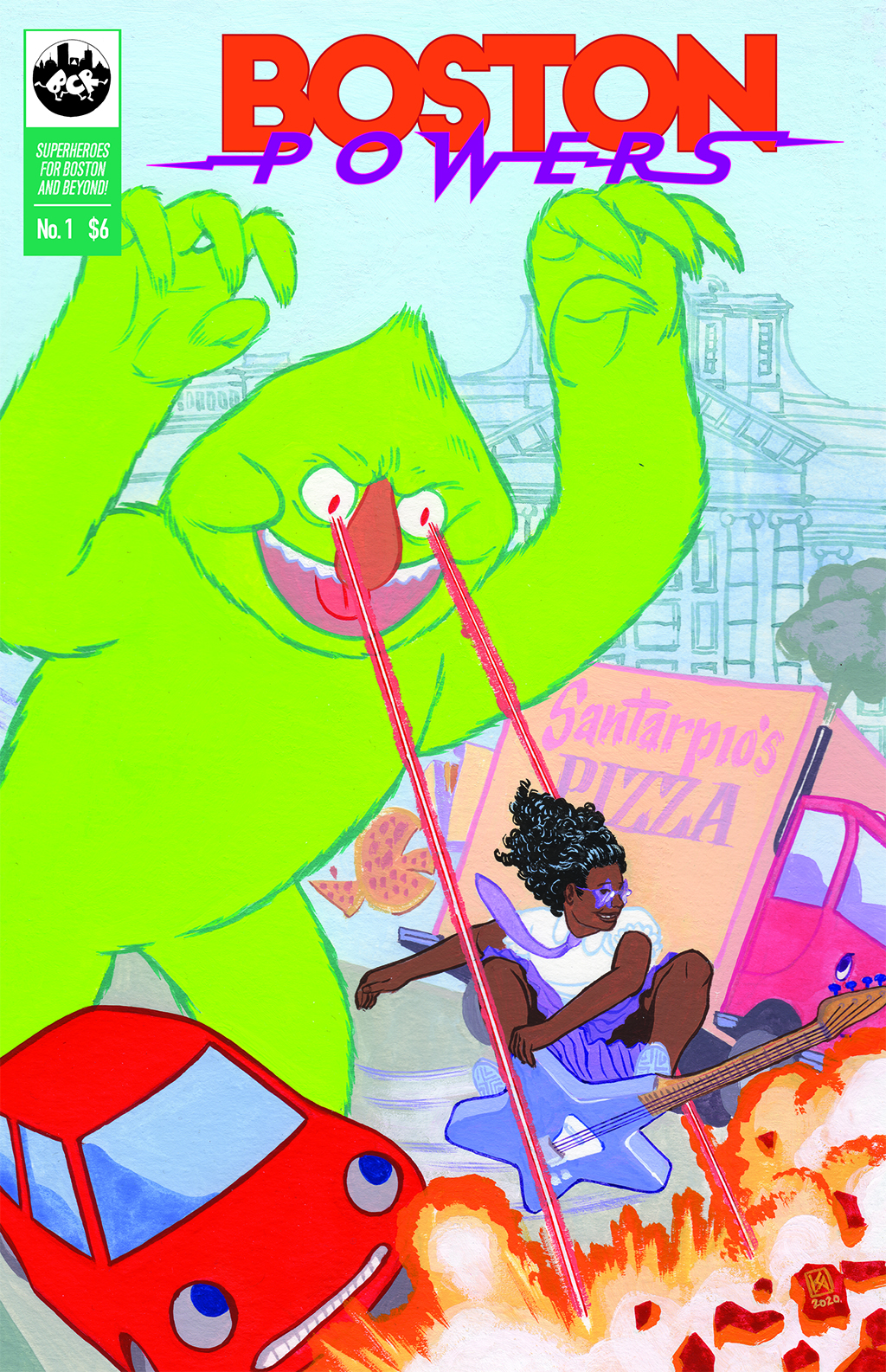 The Boston Comics Roundtable’s debut “Boston Powers” anthology is available through The Million Year Picnic comics shop in Harvard Square. The cover is by Kurt Ankeny.

The Boston Comics Roundtable – which until the coronavirus shutdown met weekly to write and draw in its not-so-secret lair in Porter Square – has created its first series designed specifically for kids, and especially for local kids: “Boston Powers.”

The 40-page, full-color anthology includes five funny, action-filled and often delectably weird tales. There are vampires, demons and pink slime monsters for young superheroes to fight; “The Superhero Battle of Prospect Hill Park,” set in Somerville, stars Worm Man, whose alter ego is the driver of an ice cream truck with flavors such as Chocolate Rotisserie Chicken that are seemingly beloved by his customers. 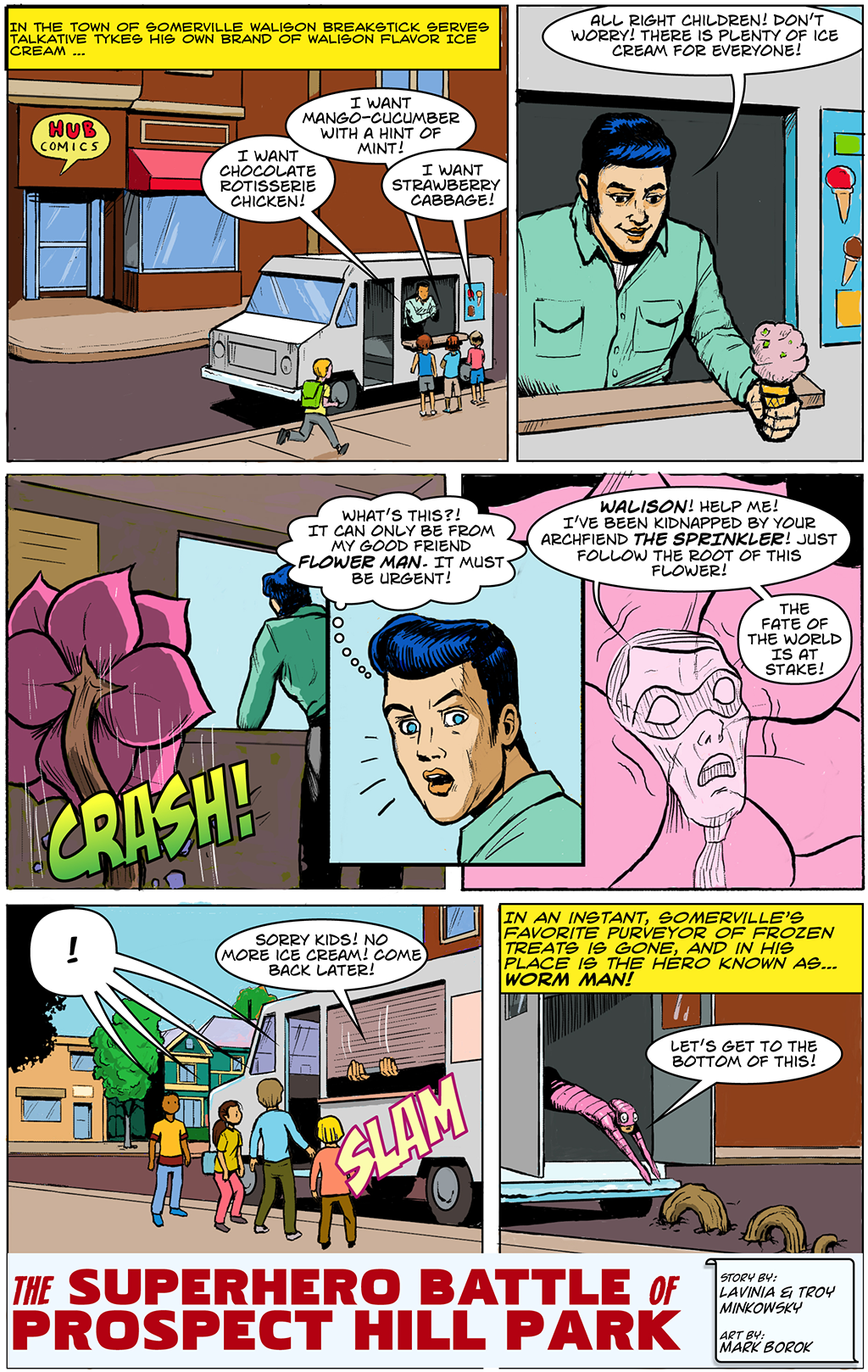 “The Superhero Battle of Prospect Hill Park” is written by Lavinia and Troy Minkowski and illustrated by Mark Borok.

But from the diversity of the cast to settings such The Pru, plenty of “Boston Powers” is recognizable. One team even has a hard time getting to the scene of a battle because the T is delayed.

While the comic book promotes positive values and diversity, the first goal is to entertain readers and show them their own towns and neighborhoods as locations for adventure and fantasy, said Dan Mazur, who edited the collection.

“We wanted to emphasize the silly, colorful, imaginative excitement of the superhero genre, the reasons we all fell in love with it as young comics readers,” Mazur said. “And by inventing superheroes whose turf is in and around Boston, we hope to have made something even more fun for local kids.”

The series was supposed to debut at the Boston Kids Comics Fest on April 27, but with that event postponed by the current health crisis, the comic is instead available exclusively through The Million Year Picnic, the historic comic book shop at 99 Mount Auburn St., Harvard Square. The store will deliver or ship books, and says it offers curbside pickup as well.

Three issues are planned for this year. “Boston Powers” No. 1 is $6, and can be ordered here.